As Mexico City continues to add population, multiple factors and constraints pushed development and irregular settlements to hillsides of the city’s peripheries. Current informal urbanization pattern lacks infrastructural provisions and open space, which further increases social inequality. This project introduces a pre-emptive approach, a topographic landscape strategy that acts as an open space armature for future development on hillsides of the city. By connecting and planting hydraulic buffers along steep slopes and introducing topographic interventions in connected bands of open space, the project brings social, ecological, economic, and cultural amenities that support and sustain the inevitability of informal growth pattern. 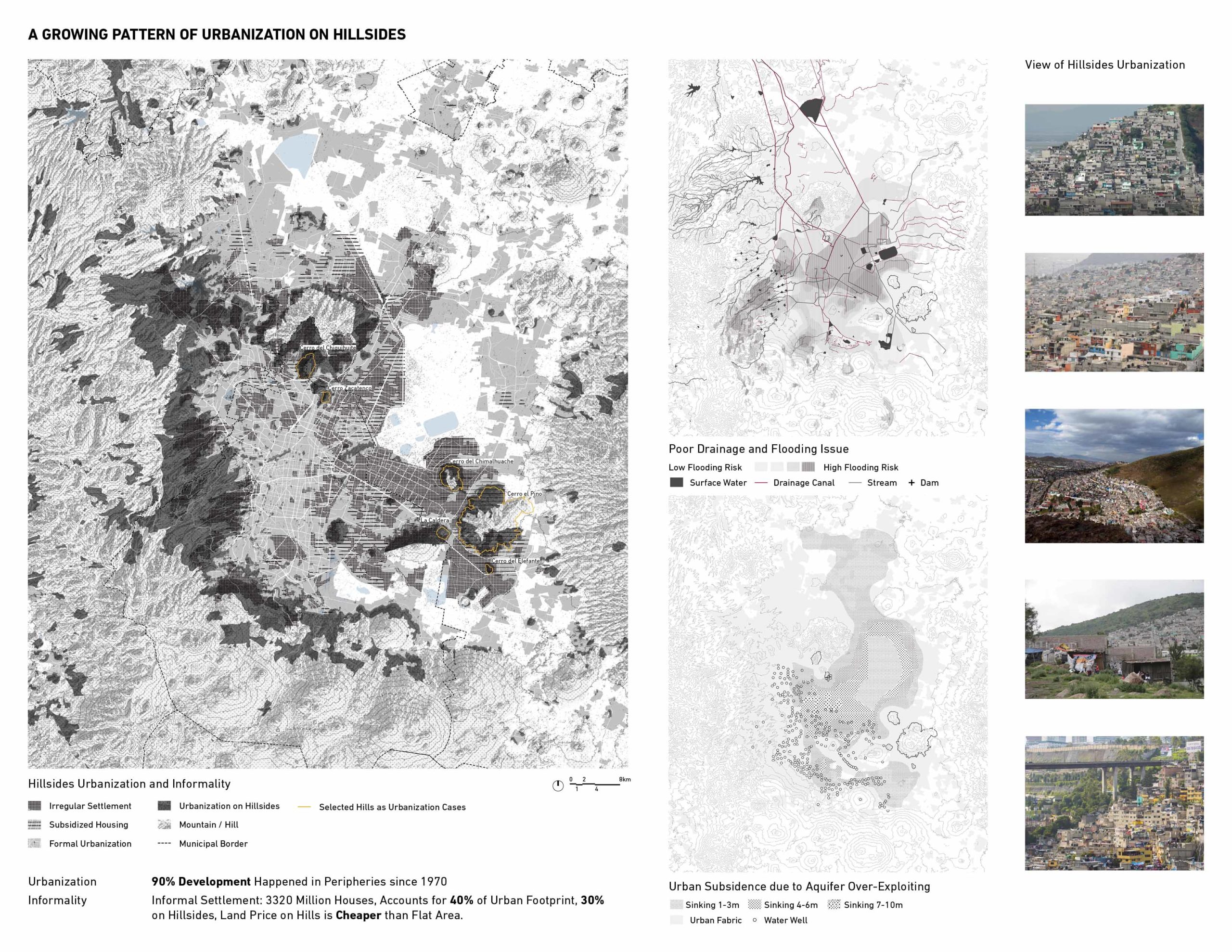 In the past several decades, we see a growing pattern of urban sprawl on the hillsides in peripheries, and most of them are self-built irregular settlements. Because of the incompletion and unsustainability of current informal urbanization model on hillsides, people frequently lack basic services, such as water supply, sanitation, accessibility and other amenities. Six case study sites are analysed and ranked to find the priority site to be further urbanized soon. Among them, Cerro el Pino would be the priority to be intervened because of its good access to public transportation and services. Based on existing informal development model, irregular settlements will further creep up and cover the mountain, lack of trees put this place at high risk of mudslides during the rainy season. People need to pay a quarter of their salary relying on trucks and donkeys to transport water due to poor water supply. All these issues plague hillside neighbourhoods and make it inconvenient and unsuitable to live. The northwest transect from the peak to bottom of the hill is selected as a testing site to implement design strategies. Here, we have seen growing urbanization in the past ten years and irregular settlements are arriving. Comparing with density of other hills, it will add another 1000 people. Settlements will further creep up and cover the mountain, destroying vegetation that recharges rainwater into aquifer and protect the soil from becoming unusable dirt and dust.

Lack of trees and steep lands in turn put this place at high risk of mudslides and flash floods during the rain season. Lack of water infrastructures would force people to pay almost a quarter of their salary relying on trucks and donkeys to transport water. All these issues would plague neighborhoods and make it inconvenient and unsuitable to live without proper interventions. In response to this informal urbanization pattern lacking infrastructural provision and open space which increases social inequality, the project introduces a topographic landscape framework that acts as an open space armature, manages informal growth and addresses needs of people in existing and future neighbourhoods through insertion of social-economic and ecological amenities. Through connecting and planting hydraulic buffers along steep slopes and introducing topographic interventions in connected belts of open space, this piece of landscape takes simple moves that relate terrain, water, vegetation and people. Along intersection of green belts and major roads, sharp different feelings are experienced along various nodes. They provide water and food resource, in the meantime conserve the environmentally sensitive and open space. This project strives to find a pre-emptive way to support and sustain the inevitability of future informal growth and create an armature system that would be beneficial to self-built neighbourhoods and the mountain ecosystem in the long run. 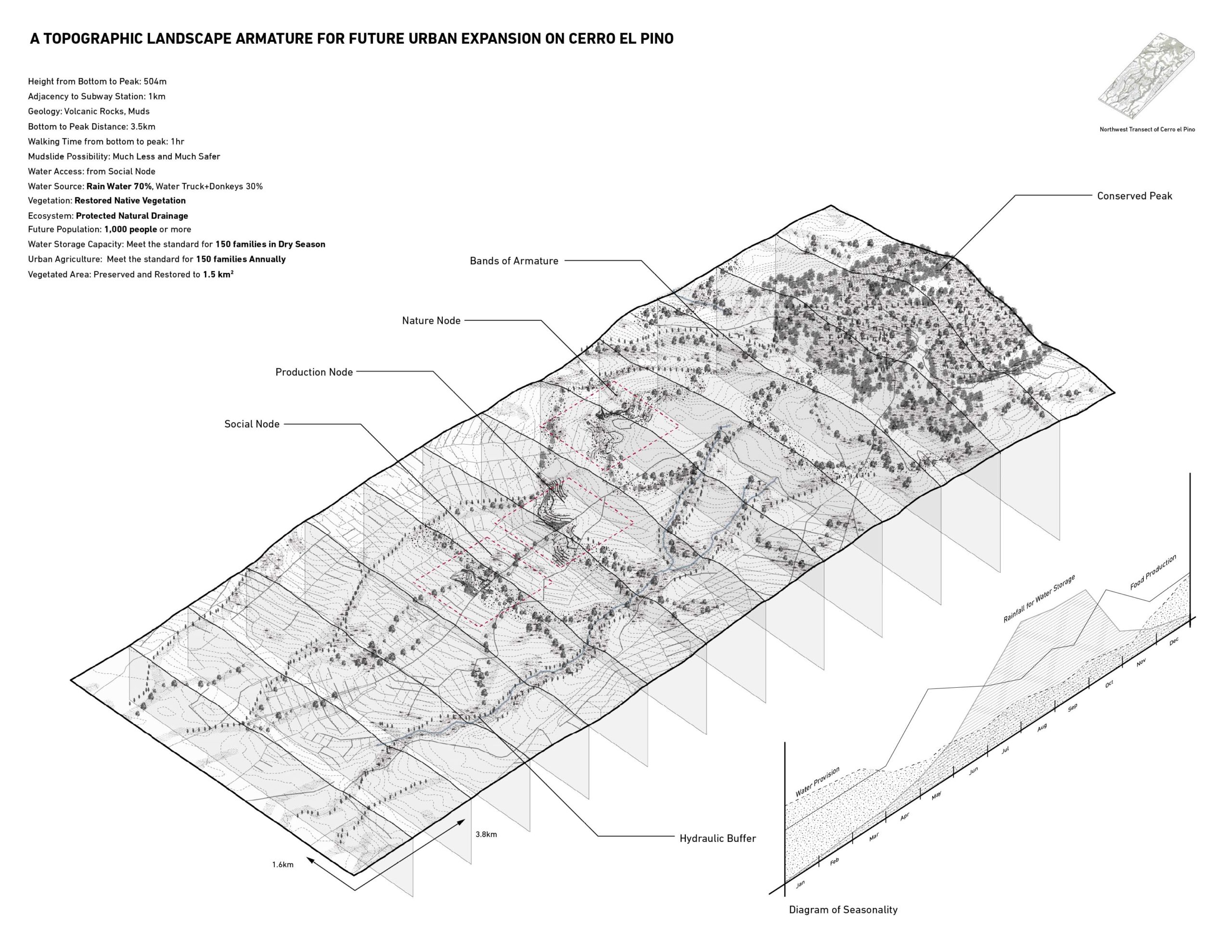 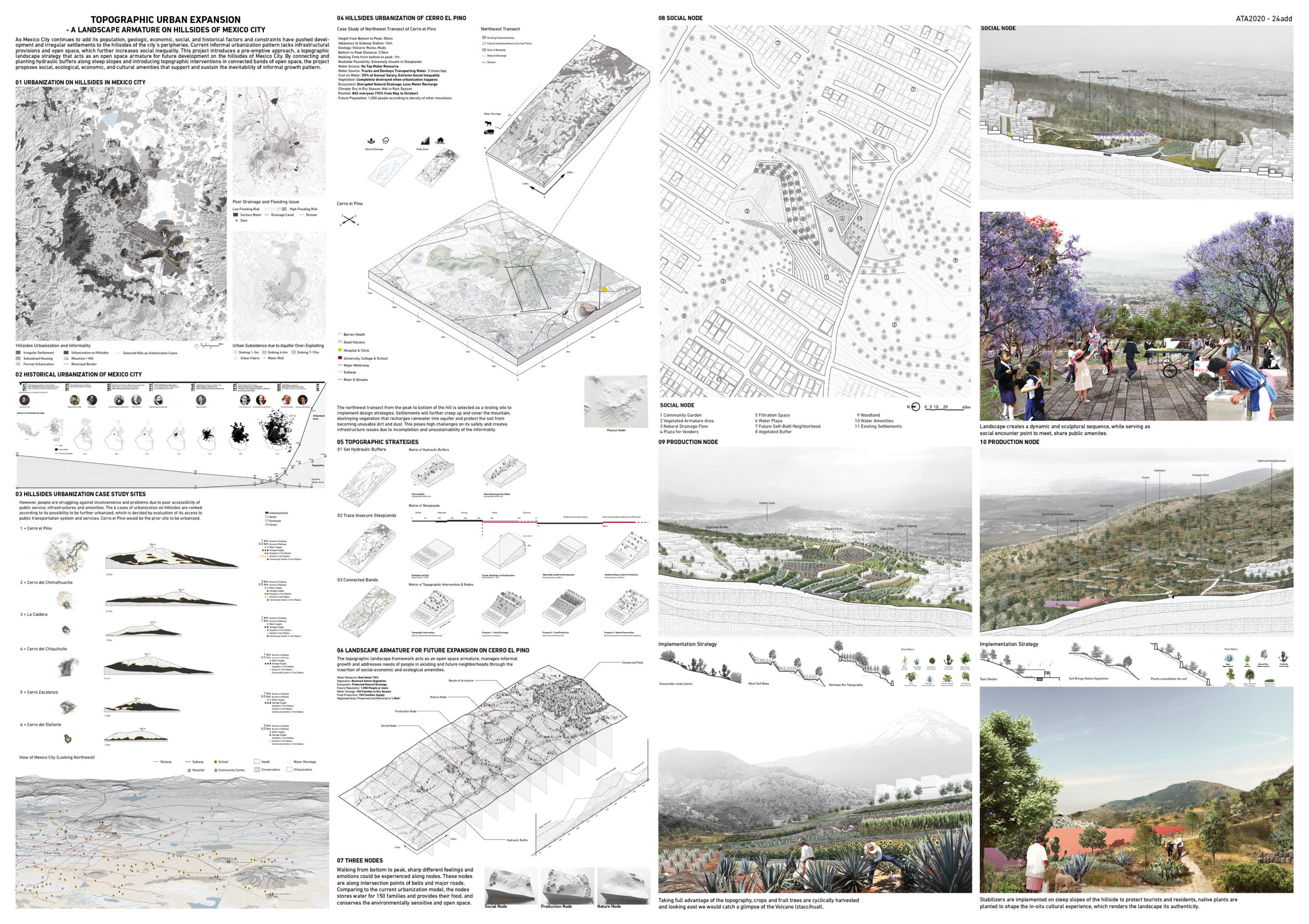