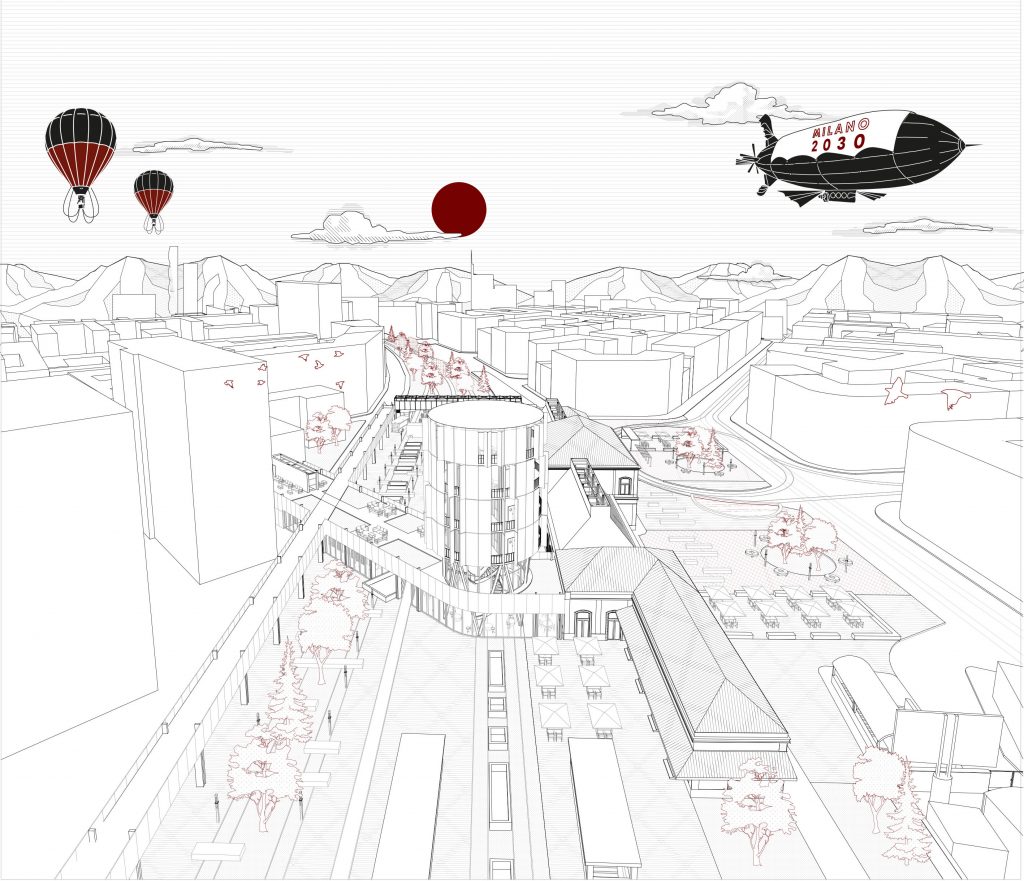 Impressive data show that cities all over the world are devouring 75% of Earth’s resources. At the current rate, the urban population is predicted to be double by 2050, meaning 70% of the total global population, thus raising questions about how cities could feed themselves in the future.
Since ancient city-states, food and animal routes have historically shaped the urban morphology. The reasoning about food led to the choice of the city of Milan as a case study for this work, since it is one of the leaders in the contemporary urban food policy scenario. Porta Genova, in particular, is part of the larger reordering vision of seven railway yards, with the aim of fostering innovative urban spaces and reconnecting several areas of Milan. 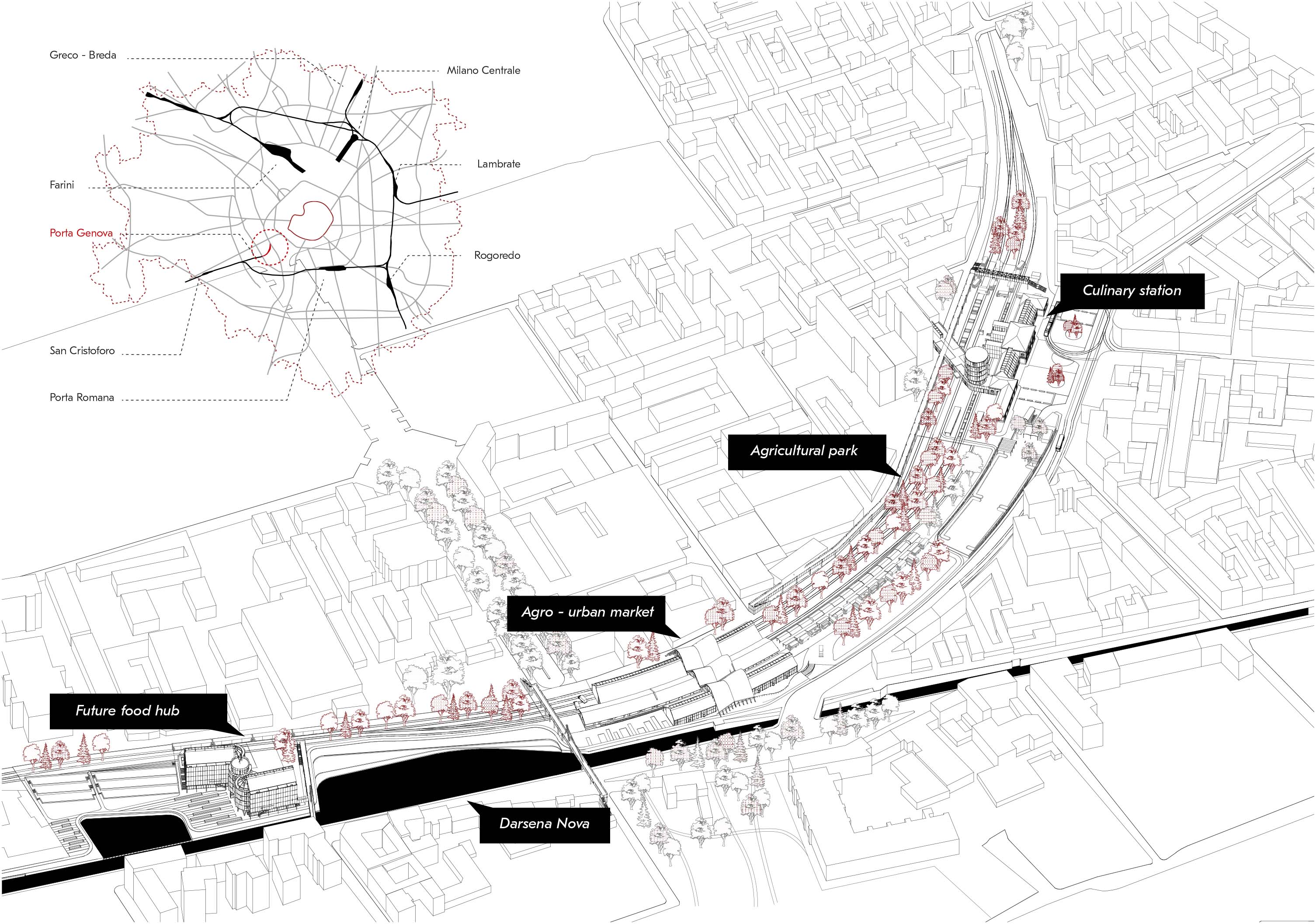 The place, formerly occupied by the railway, is an interesting urban slice that divides the district of Tortona-Solari and the area of the Navigli. The presence of two important ways of transportation, the railway, and the Naviglio, makes it the perfect place for the reasoning about food and city. The project set the goal to reach three main objectives: 1. Study how food can influence urban morphology and architecture; 2. Find a solution to manage a vast empty space in the city of Milan; 3. Design a tailored system of food production in urban environments, to foster renovation of degraded or abandoned areas. The project was approached through three topics: administration, retail and production of food in the city. A former railway station turns into an innovative place of catering. A former railway warehouse expands and becomes a food market. An empty area is filled with a novel prototype of a vertical farm, a future food hub, which serves the other two spaces. The quite small scale and the compactness of the farm make it a replicable prototype.

The three projects are connected by a general redefinition of the entire area of Porta Genova through a new agricultural park, with urban gardens and crops, bridges, a fish basin, and a new water reservoir, the Darsena Nova. All the buildings are also designed with the specific purpose of being circular, with a completely dismountable wooden and metal structure. The general organization of the masterplan is also thought of as a closed-loop system of energy and resources. This thesis represents an attempt to discuss an urgent topic such as that of resource scarcity together with a more traditional study on the urban morphology. The project shifts from the macro-urban scale to the architectural and construction level, considering different aspects of sustainability, innovation, and culture. The final outcome can be read as a suggestion for future similar interventions or a provocation to try to approach the urban and architectural project under new perspectives. 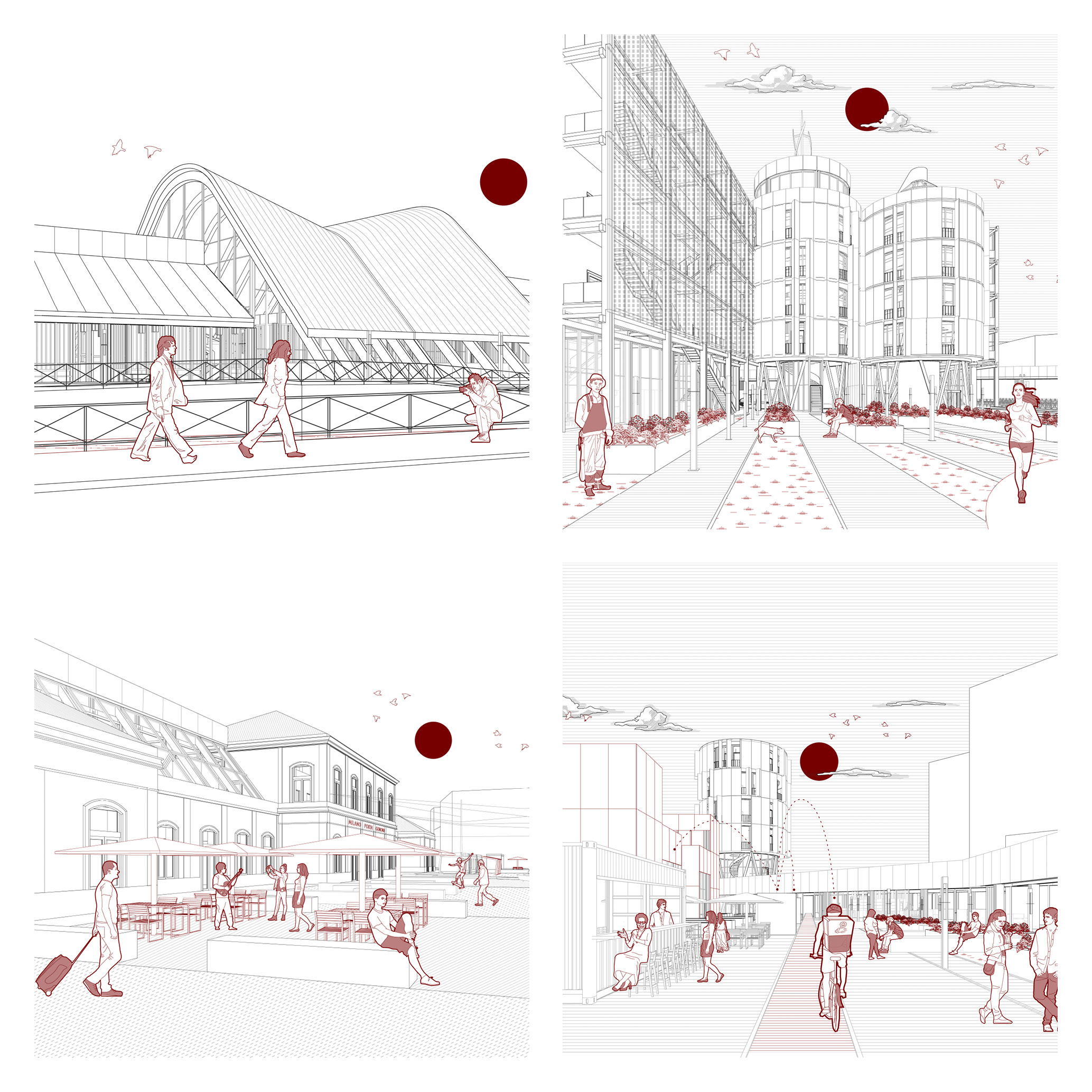 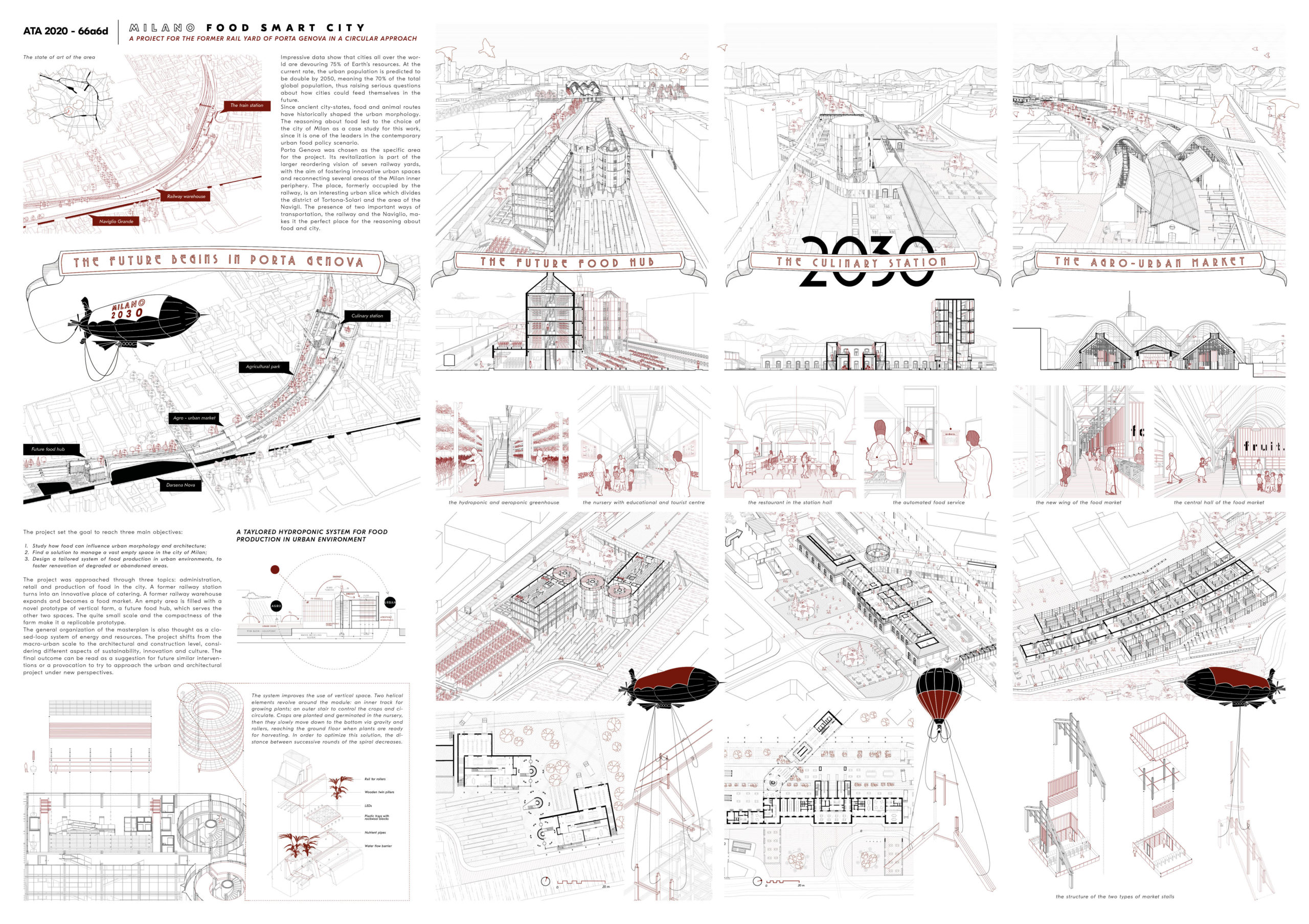 As a passionate, determined, open-minded architect, I always try to push my self to the limit and to reach my goals in the best way. I graduated cum laude in Architecture at Politecnico di Torino in 2017 and I have received the degree with honors in the MSc in Architecture, Construction city in 2019, still at Polito. I spent six months at TU/Eindhoven for an Erasmus exchange. I have also been selected along with other 150 talented students to be part of the Alta Scuola Politecnica program, in a joint venture with Polytechnic of Milan, which gave me the chance to widen my horizons and receive a transversal education on innovation issues. I strongly believe in the future developments of technology in architecture to improve people's lives and transform our cities into smarter, safer, greener places.
FOLLOW
MESSAGE
LOGIN TO LIKE
[pro_ad_display_adzone id='2269' ajax_load='1' info_text='Advertisement' info_text_position='' font_color='#' font_size='11']