[…] Suju is a very great and noble city. The people are Idolaters, subjects of the Great Kaan, and have paper money. They possess silk in great quantities, from which they make gold brocade and other stuffs, and they live by their manufactures and trade.
The city hath merchants of great wealth and an incalculable number of people. If the men of this city and of the rest of Manzi had but the spirit of soldiers they would conquer the world ; but they are no soldiers at all, only traders and the most skilful craftsmen. And you must know that In this city there are 6000 bridges, all of stone and so lofty that a galley could pass underneath them. […]

VENEZIA - SUZHOU The friendship between Venice and Suzhou, an ancient city on water in the Chinese province of Yangsu, goes back a long way: the twinning agreement dates back to 24 March 1980 and every year at least one cultural initiative is promoted to commemorate the deep relationship between the two cities. An agreement of artistic, technical, economic, tourist, political, urban planning and above all cultural exchanges. Two cultures that are distant but at the same time close, similar in their relationship with the surrounding territory and in their being cities of water. Cities that find their main traffic flows in their canals, sources of commerce for excellence. Cities that share a close relationship with a "Grand Canal" and a special relationship with cars, the 20th-century main transport system. One has always rejected it, isolating it in a small part of its banks, while the other has gradually allowed it to permeate its fabric, slowly corroding it and modifying its forms, axes and relationships between buildings, things and people. 2020 marked the 40th anniversary of the agreement; the aim of this thesis is to capture the essential features of these two cities, analyse them, and create relationships and suggestions, revealing a possible future scenario; a research project that seeks to highlight the relationship between these two cities, which can be seen in their construction, in the way they relate to the surrounding area, and in their being cities of water. 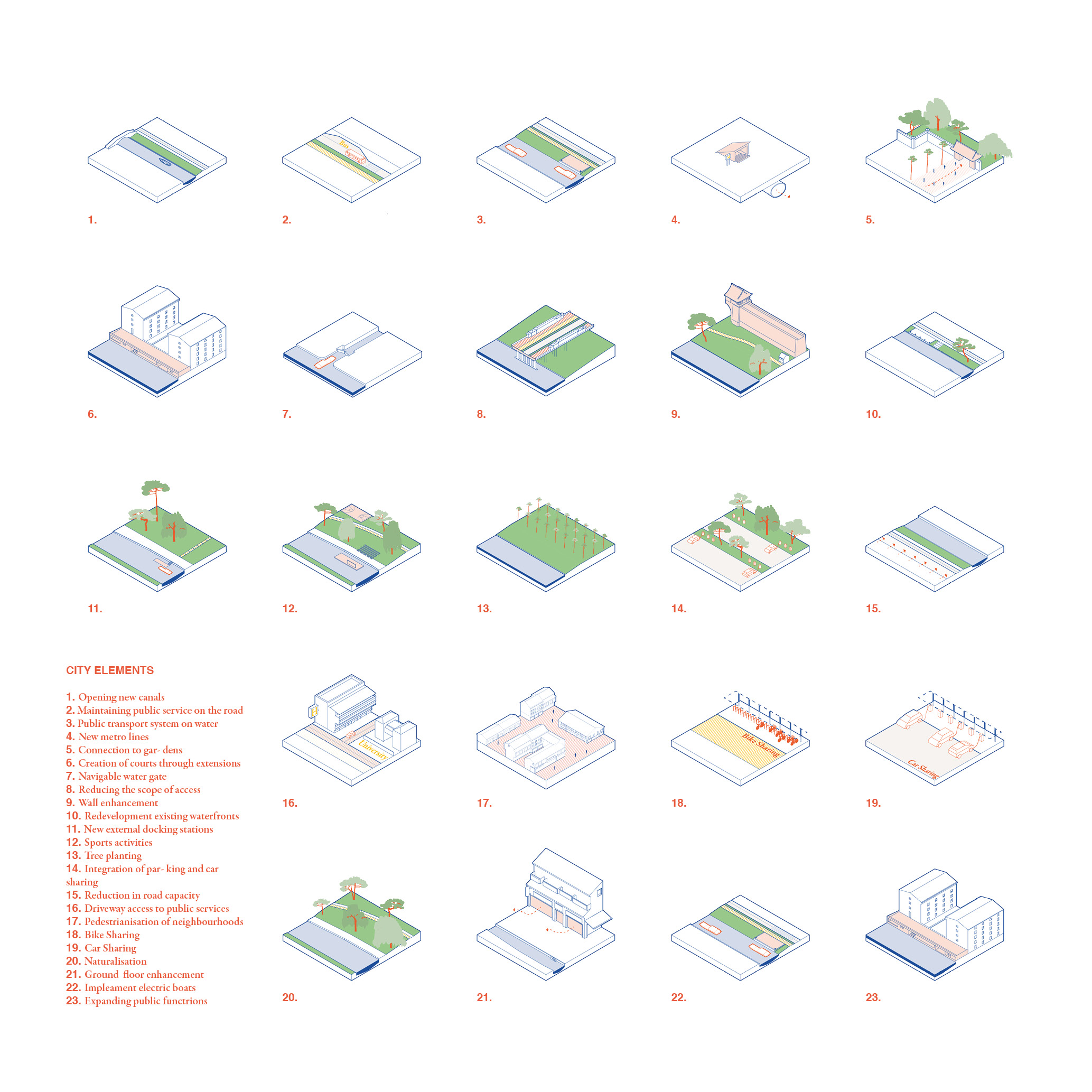 THE SCENARIO AND ITS ARTICULATIONS The scenario is structured around three main systems in close relation to each other: the garden system, the daily life system and the green ring. Elements that not only redefine the road system and the relationship with the water, but also modify the relationship with the public space, articulating themselves according to a purpose. Road axes that redefine the way of moving around in the old city centre, making it possible to reach any inner area in a variety of ways and by a variety of means, both tourist and for everyday life. Systems that are recognisable not only for the means of transport with which they interact and for the major social activities located there, but also as distinctive signs extending between the new pedestrian streets throughout the old town. Elements that come into contact with the various urban patterns and interact with them, at times modifying or integrating them, with the aim of re-establishing not only a new road system but also a new relationship with the different spaces of the old city centre, with the aim of reconstructing a city identity that is increasingly disappearing over time. The garden system represents the element of naturalistic connection and transport based on the original system of roads and canals determined by the strategies of the scenario. A system that therefore aims to enhance and requalify all that historical and cultural heritage which, for centuries, has been a symbol of the city. 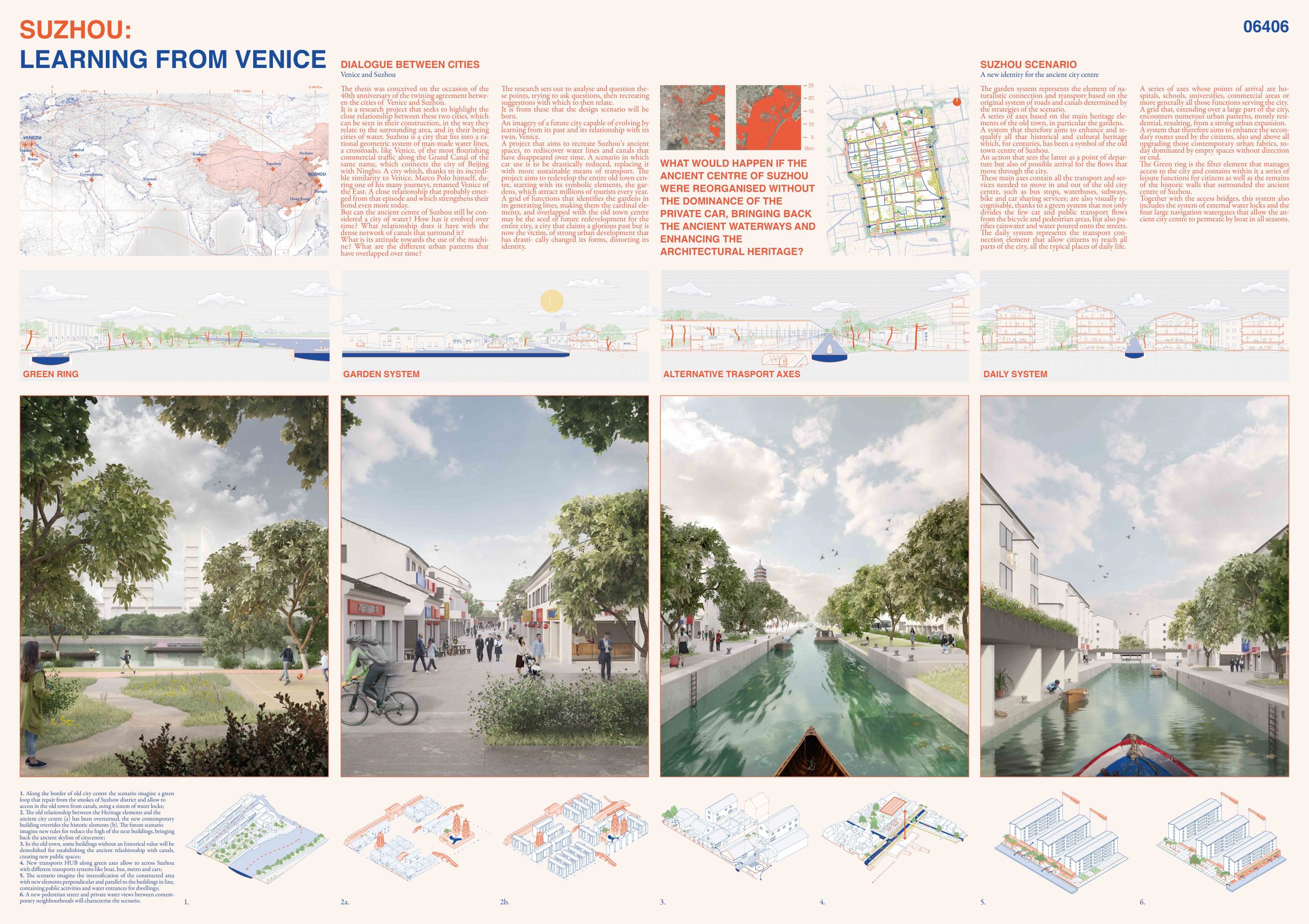 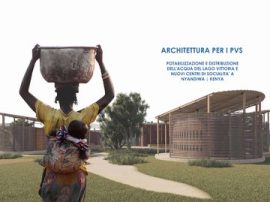