re_connecting city and port: a new identity for San Giovanni a Teduccio

The Port of Naples, heart of the Mediterranean Sea, is one of the biggest commercial and touristic port of Italy. Due to “Urban Sprawl” phenomenon and easterly waterfront industrialization, nowadays the relationship between city and port has been denied. The Port Authority project to 2030, is about doubling the east dock unto 1,3 km to create a terminal container exactly on San Giovanni a Teduccio coast, totally turning away the sea from the city.
The project aims to make port development, industrial expansion and logistics spread coexist, in order to create a new vector for urban liveability. Unlike Port Authority, which aims only to mere industrialization, the project wants to unify social, environmental, technological and urban aspects.

The challenge is to make a controversial city like Naples, in which the hystorical city and the sea have always been united, a pole where the conflicts start to coexist. As a matter of fact, unlike european ports, defined “port urban regions”, whose development came up outside the inhabited center, until the nineties the development of the city of Naples, “port city”, has always taken place easterly, managing to maintain close contact with the city. The port city future aims to make industrial development to grow in parallel with the urban one. So, the real question is: "how can a logistics platform become a carrier for a new urban liveability?" The major issues treated at the "Naples Shipping Week 2019", an international convention on port expansion, were: "green shipping summit", "smart port and logistic", "new markets" and "port city futures". The project starts from this strongholds and exploits the strong shape of the Port Autority's one, to empty a part of the dock, recreate a filter island and restore the ancient marina. The shape of the filter island follow the coast line and facilitates the entry of the boats into the marina and the perimeter is surrounded by a wooden path that follows the entire waterfront. 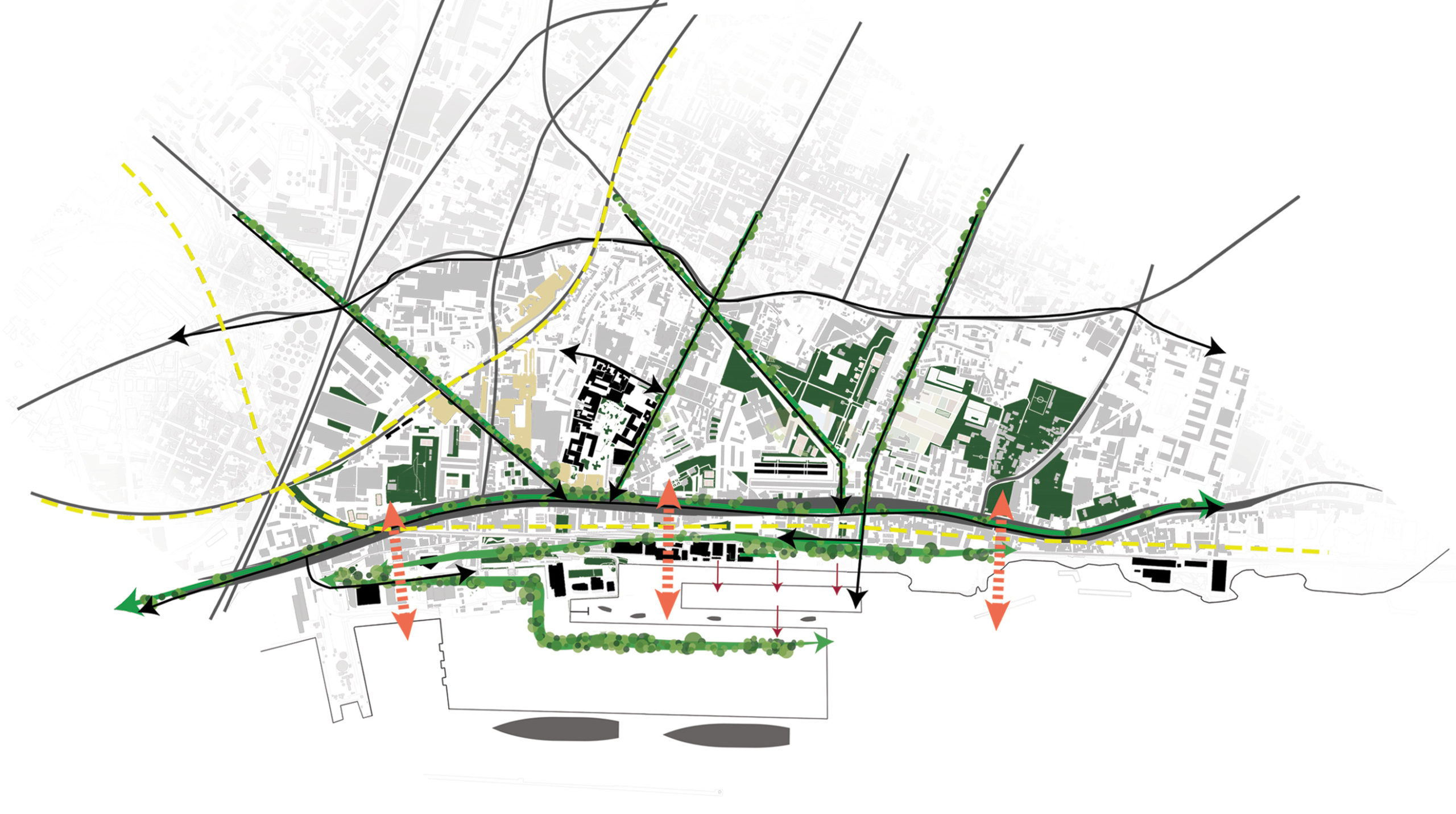 Despite the numerous landmarks, the entire area presents many critical issues which were the guidelines of the project. Among the weaknesses found, the strongest are certainly the few pedestrian crossings towards the sea on the railway and the coastal area abandonment which, despite being degraded, is still frequented by bathers, despite the fact that there is a ban on bathing due to pollution and dangerous industries on the coast. The biggest cause of the pollution is the fact that we are on a mainly artificial coast, occupied by industrial residues and water drainage channels, which have led to sediments of metals, hydrocarbons and carcinogens. We therefore envisage sustainable strategies such as "floating phytodepuration" and the quenching and tempering of hydrocarbons which are in line with the 2030/2050 directives of “2030 Agenda”. Guiding our project choices on materials and sustainable strategies even on a small scale, there is certainly the will to mitigate the “heat island phenomenon”, typical of cities where there is almost no green presence and there is a prevalence of asphalted roads: all this by choosing permeable and semi - permeable materials and increasing greenery thus also reducing CO2 emissions. The territory also has potential values as there is a lot of greenery and industrial archeology that can be exploited, thanks also to the use of drosscape and the removal of industrial fences that will lead to the reappropriation of the landscape. 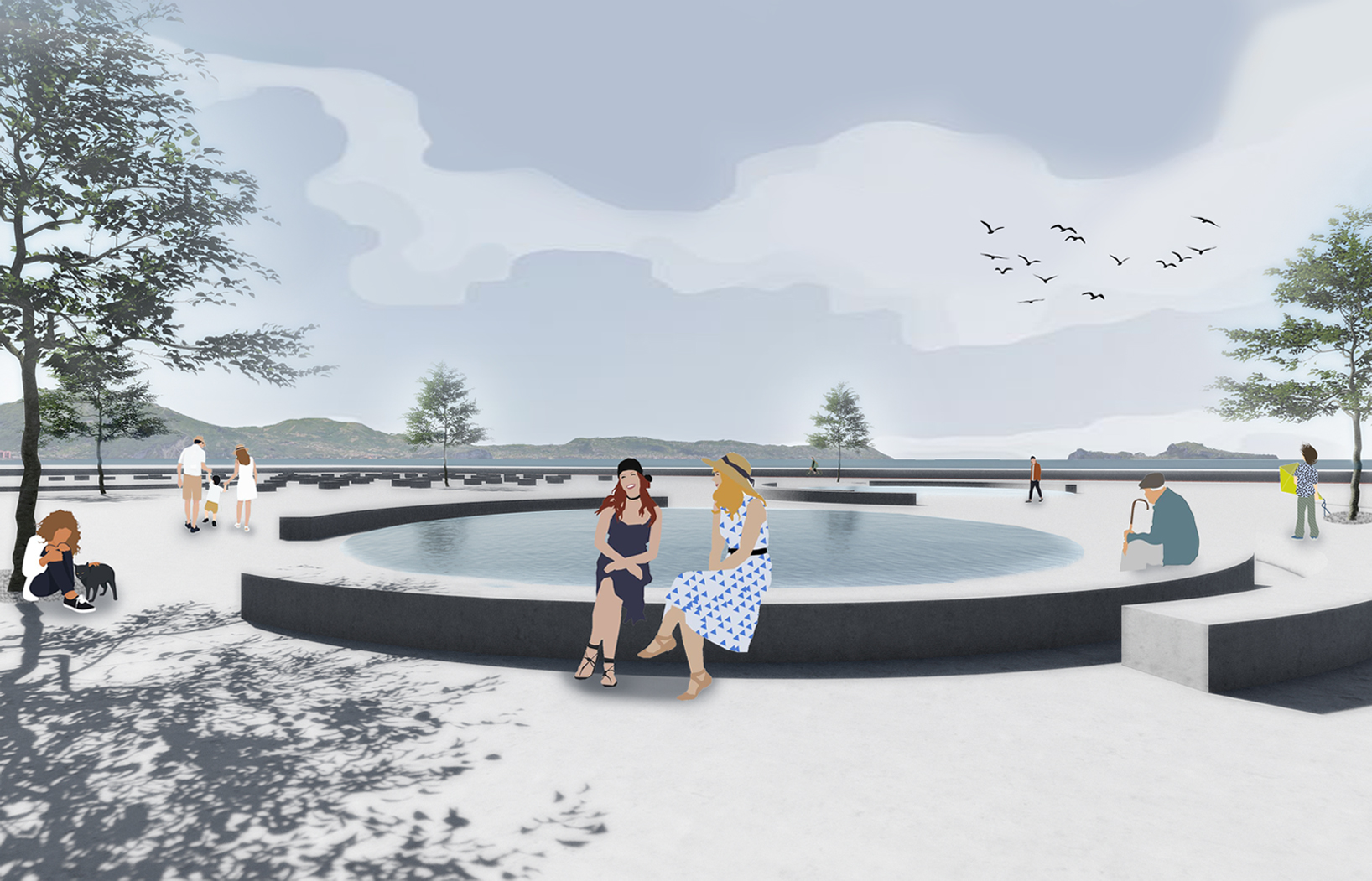 Bianca Pagano and Martina Pizzicato, graduated in Architecture at University of Naples Federico II - DIARC. Our thesis project deals with the denied relationship between the waterfront and the city of San Giovanni a Teduccio.
LOGIN TO LIKE
[pro_ad_display_adzone id='2269' ajax_load='1' info_text='Advertisement' info_text_position='' font_color='#' font_size='11']