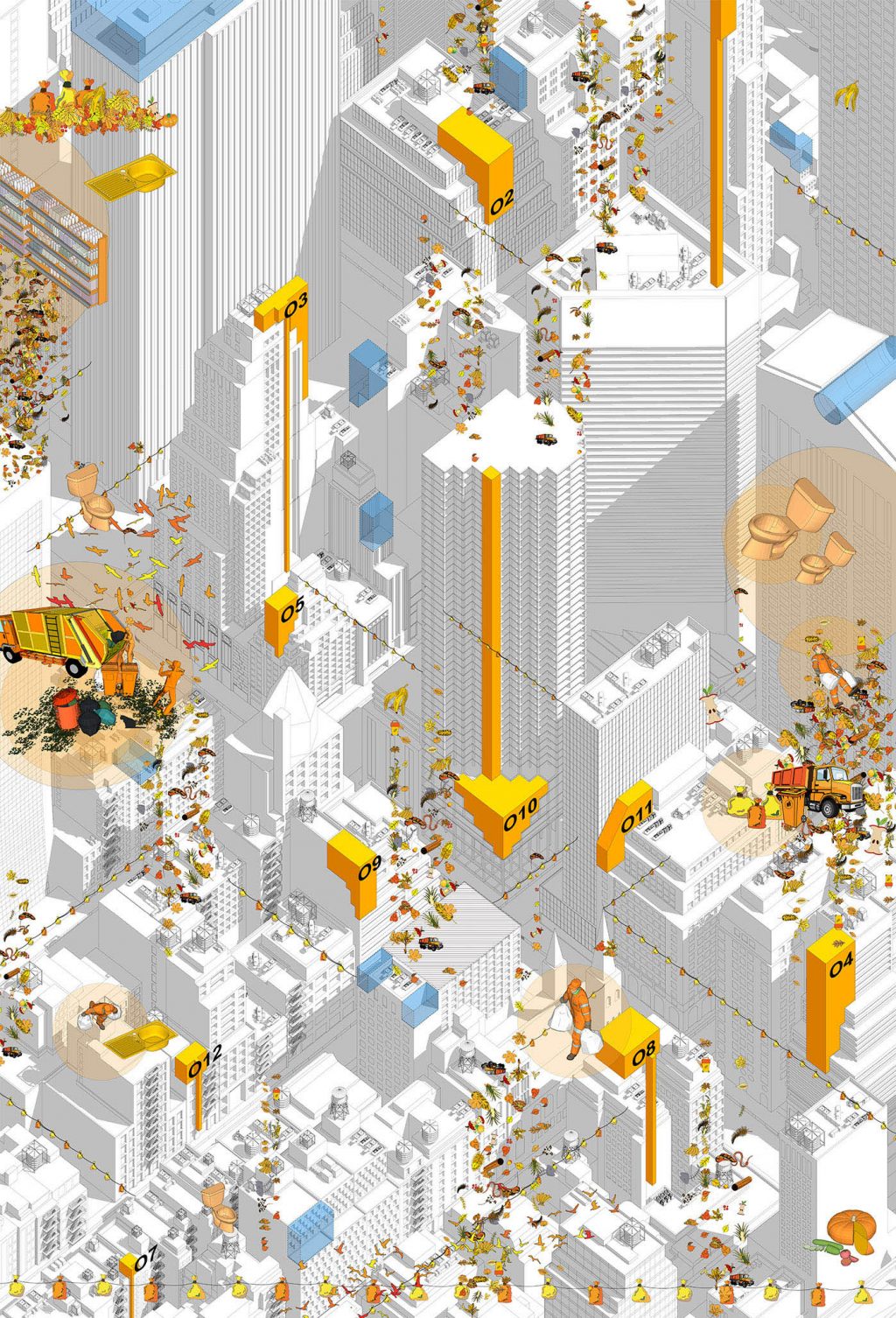 In response to the desire of New York City to reduce the emission of greenhouse gas 80% by 2050, this project is an alternative energy system that reveals and remapping the carbon credit in the city, hence rebuilding the relationships between buildings, people, and nature. The interventions questions how can architecture serve as a mechanism to facilitate energy infrastructure?

Extensions are proposed to parasite the city of New York in three different scales: building, street block, and neighborhood. Unwanted natural resources of the city like: human waste, tree leaves, food waste from the kitchens and restaurants, leftovers in the fridge, will be used as raw materials to generate electricity in the city from these parasitic extensions. 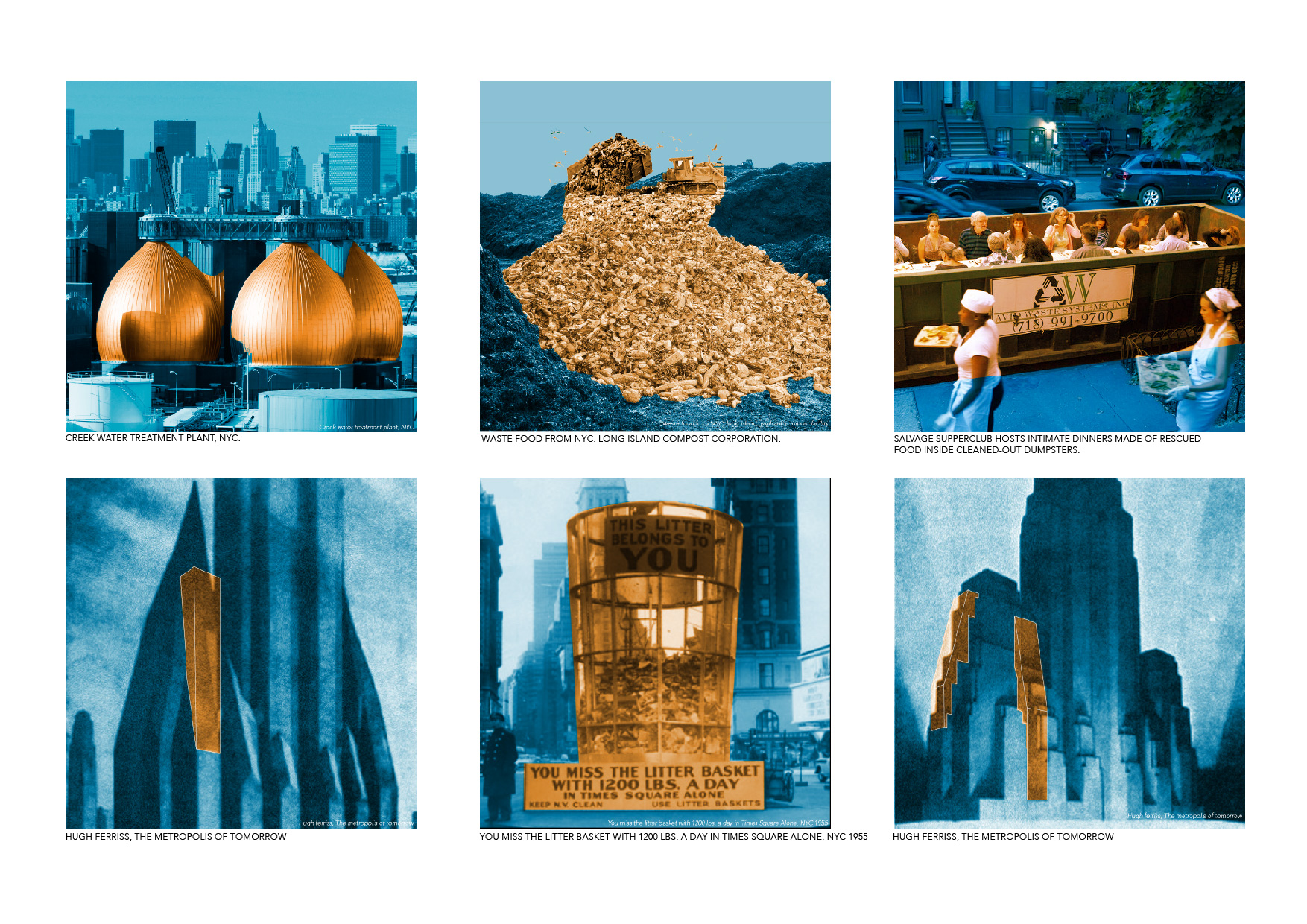 Baseline Condition, Roadmap to 80x50 NYC Existing Building / Internalises waste disposal system Improvement & repurposing Existing buildings will eventually need to move beyond “low- and medium-difficulty” ECMs alone to achieve deep energy reductions. While there are some case studies of existing buildings that have achieved significant energy use and GHG reductions, the City generally lacks examples of comprehensive retrofits that could be implemented across its diverse building stock to achieve dramatic reductions. Uncertainties about future changes in the city’s energy supply also make it difficult to predict which fuels will be the least carbon-intensive in 2050 and the implications that the grid composition will have for buildings. Strategic Intervention / Parasitizing the City To achieve this goal, this system will involve every people, buildings, and trees. The loopholes of New York planning regulations: setback, air rights and Flood zone are used to identify suitable locations for these extensions. Utilizing rooftops, setback spaces, and unused air rights to generate power, collecting food scraps and wastewater from the host building, mixing them in digest tanks, and will eventually be transformed into power through anaerobic digestion. 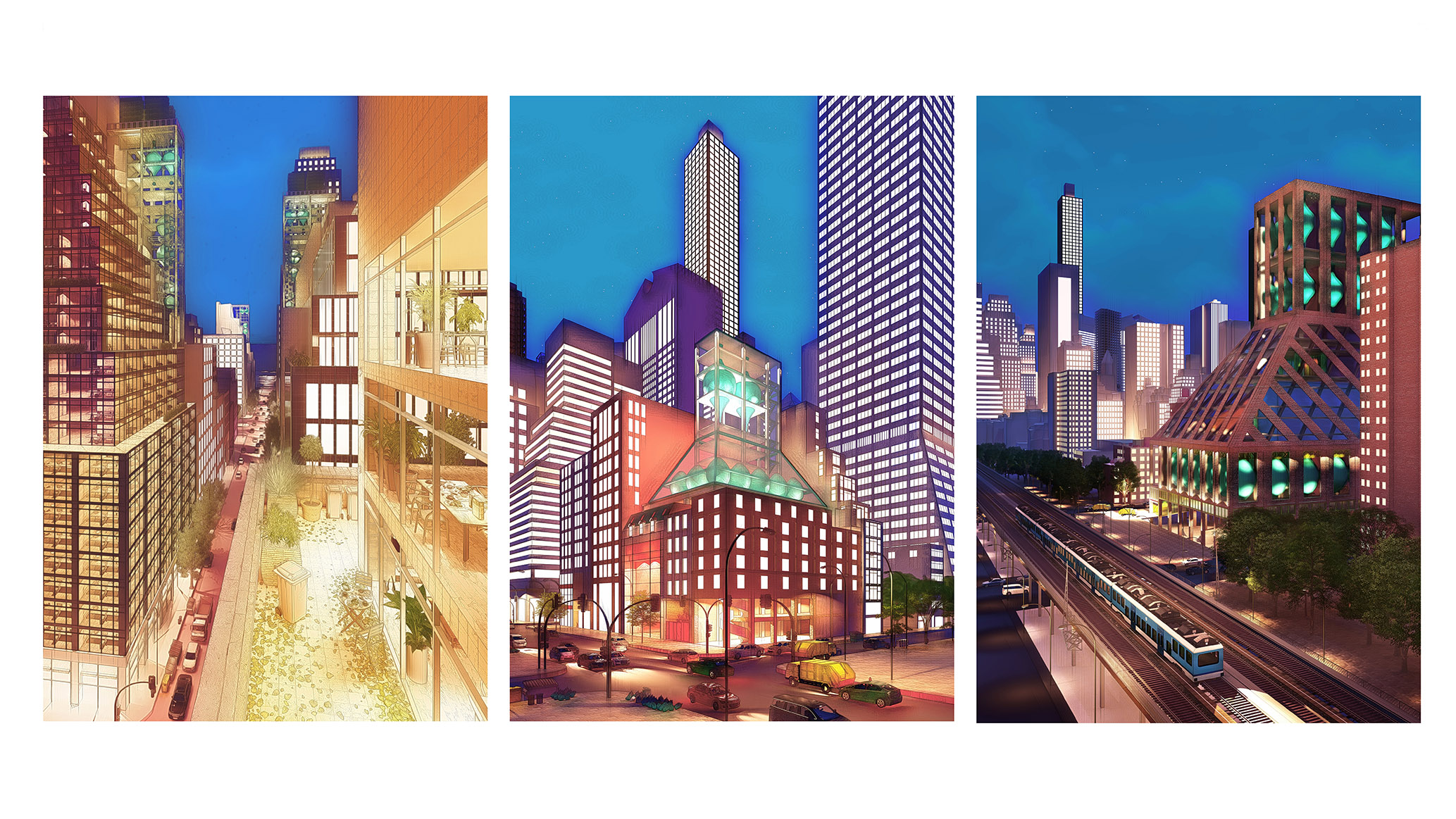 Saving our planet and city is not an option, it the only way that human can live longer. In order to intervene the giant loop of the wicked carbon market, the project does not only educates the public of the waste disposal system, but also power the city by our daily waste. On 8 October 2018, IPCC special report: limiting global warming to 1.5°C will require “unprecedented” transitions, that means “rapid and far-reaching” transitions in land, energy, industry, buildings, transport, and cities. So, How Do We Do it? Investigating natural resources in the city, for example, Human waste, tree leaf, waste-food from the kitchen and restaurant, dinner in the fridge, use these raw materials to generate electricity in the city. In order to achieve this goal, this system will involve every people, building, and trees. by using the rooftop and setback space to generate power, collecting food scrap and wastewater from the building, mix them in a digest tank through anaerobic digestion eventually transform the trash to power. The system creates a new green capital, as with those BIG company does, showing the flag and sign on every building. I believe the design can not only transform the city but also avoiding offsetting pollution to the global south (China, Brazil,...). Parasitic Urbanism can not only transform the city into a free-wasted-food city but also showing how rubbish does not need to be seen as negative.