Design on the Edge

The main objective of this thesis was to define a design methodology – based on the use of information technology tools – for climate-change adaptive solutions for urban public spaces. At the same time, I proposed a method that allows architects to understand how the outdoor space affects the indoor space in terms of thermal comfort, by using specific environmental simulation software and by relating their outputs into a parametric environment. This methodology has been applied on an urban project, which embraces an area of the historic centre of Naples between the medieval town and Garibaldi Square, where Dominique Perrault’s subway station has been recently built. 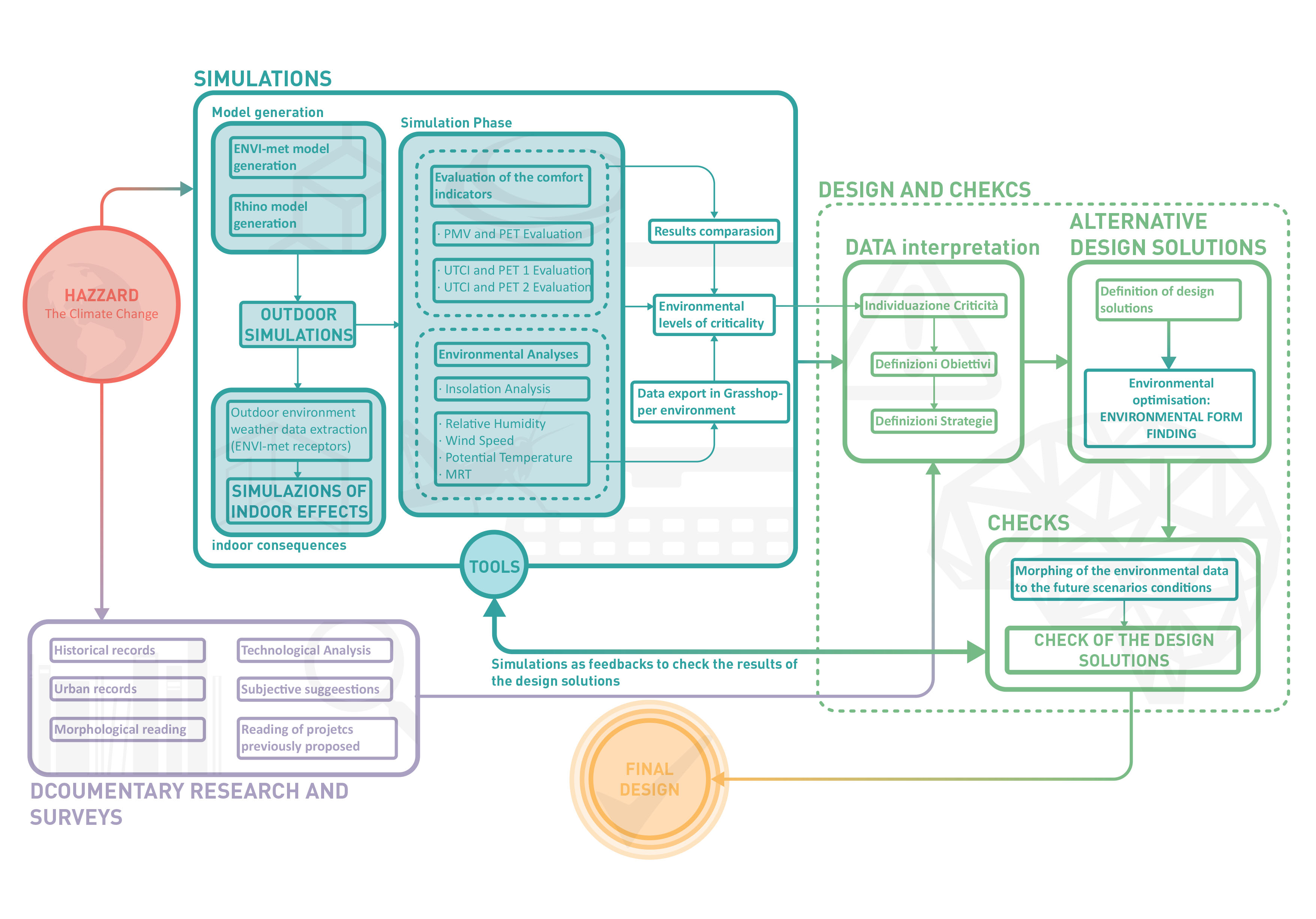 After analysing the urban context and identifying the environmental critical areas, I defined a Masterplan, where, on one hand, I made a link with the Perrault’s project and the axis of Garibaldi Square and, on the other hand, I tried to recall the trace of the medieval walls of the city, that at the present time is no longer recognizable. The previous aim was achieved by limiting the green in the city inside the walls and designing a park outside them. Numerous environmental strategies, natural as well as artificial, are applied in the project. The increment of the green spaces in the city outside the walls contributes to enhance the outdoor comfort conditions, assuming the simultaneous functions of sun shading, wind barrier and acoustic barrier. In the city inside the walls similar functions are assumed by dendriform structures and tensile structures, which provide protection from the sun and generate wind tunnel effect. On the redeveloped building in Via Mancini, a re-clad system, composed by a curved platform roof in the basement and vertical strips in the upper floors, guarantees good environmental performances according to the building orientation. 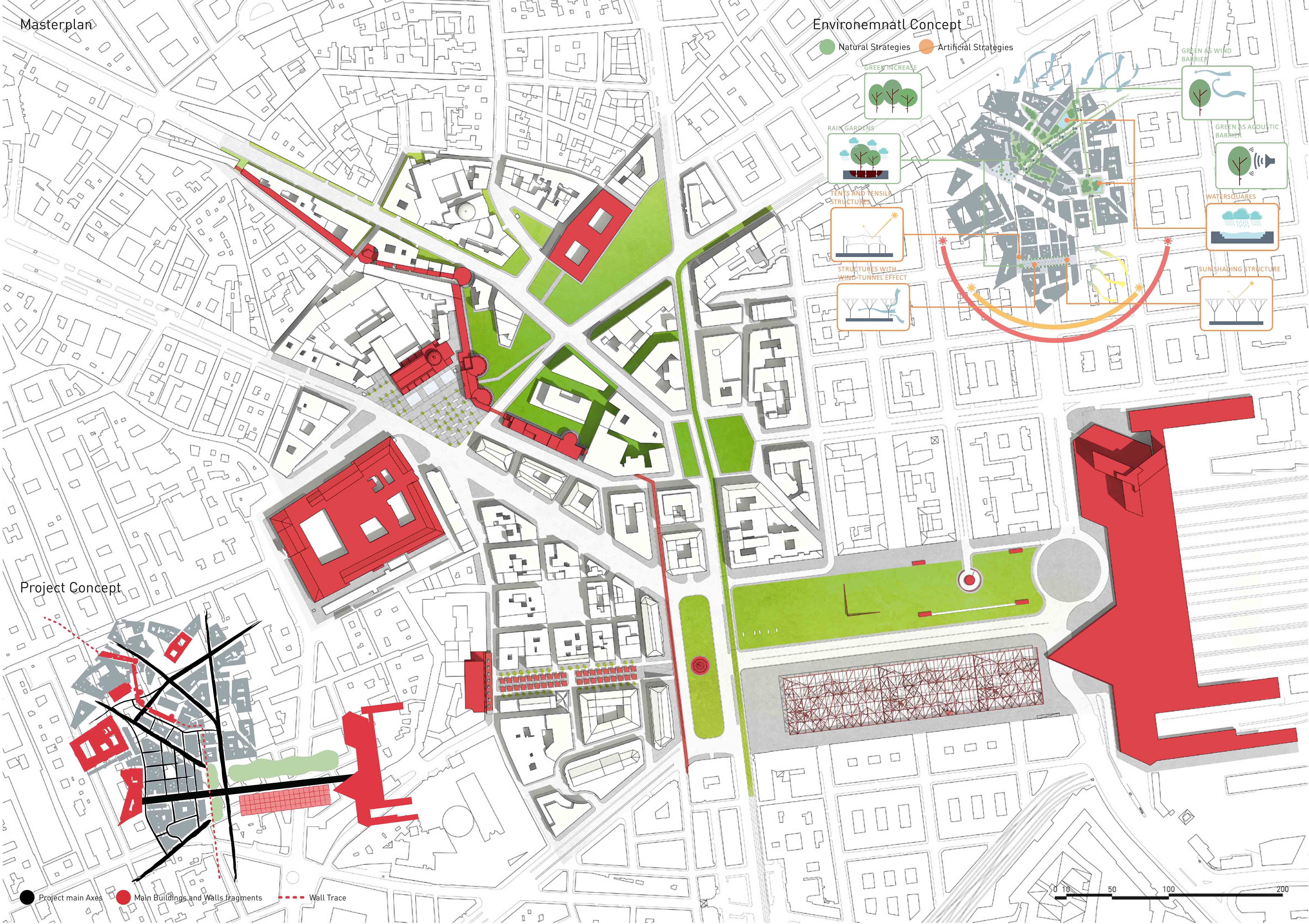 Three specific architectural themes emerged from the Masterplan scale. The first theme concerns the redevelopment project of the Duchesca district. To emphasize the axis that, thanks to Perrault’s project, runs from Piazza Garibaldi to the Duchesca neighborhood, and to maintain the historically justified principle of limiting the green to the city inside the walls, I designed a boulevard of artificial tree structures, which cover the market area. These structures were generated using a form-finding parametric software and considering Frei Otto’s studies on dendriform structures. The second theme is a retrofit project of the building in Via Mancini. Considering the impossibility to demolish the huge building at the end of the Duchesca district, and its importance as a scenic backdrop of the adjacent Garibaldi Square, I defined a re-cladding solution, covering the building with a “veil” that guarantees good technological and environmental performances and a new suitable look. The last theme is “The Reconstruction of Memory” and includes all the design choices that restore the historical and architectural identity of the trace and surviving fragments of the medieval walls. Starting from an analysis of historical maps, I recognized the trace of the medieval walls, which was restored with a pedestrian strip that connects the different surviving walls fragments. This band rises next to Garibaldi Square in form of a structure of vertical panels that creates a scenic background. 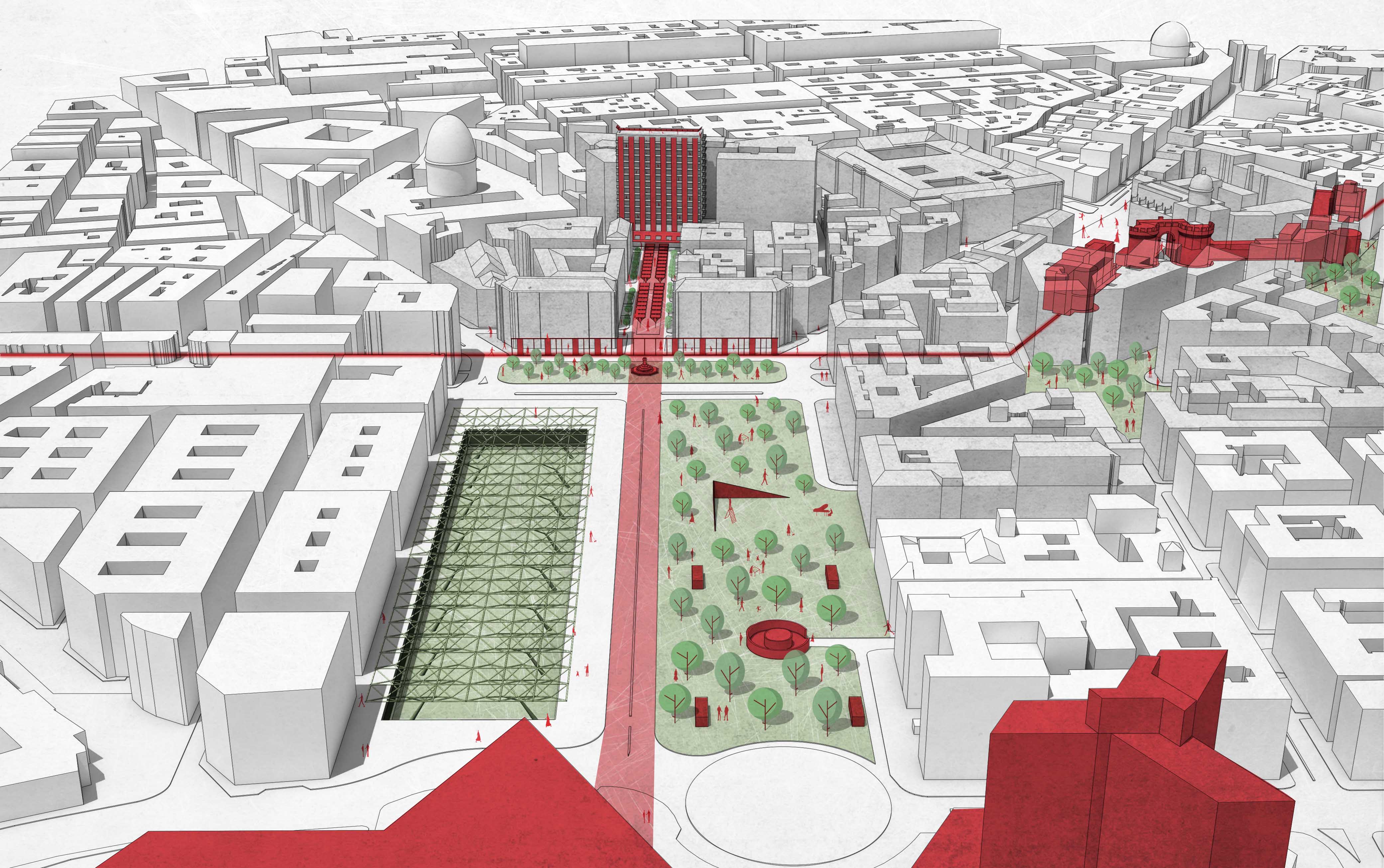