Darsena and the city 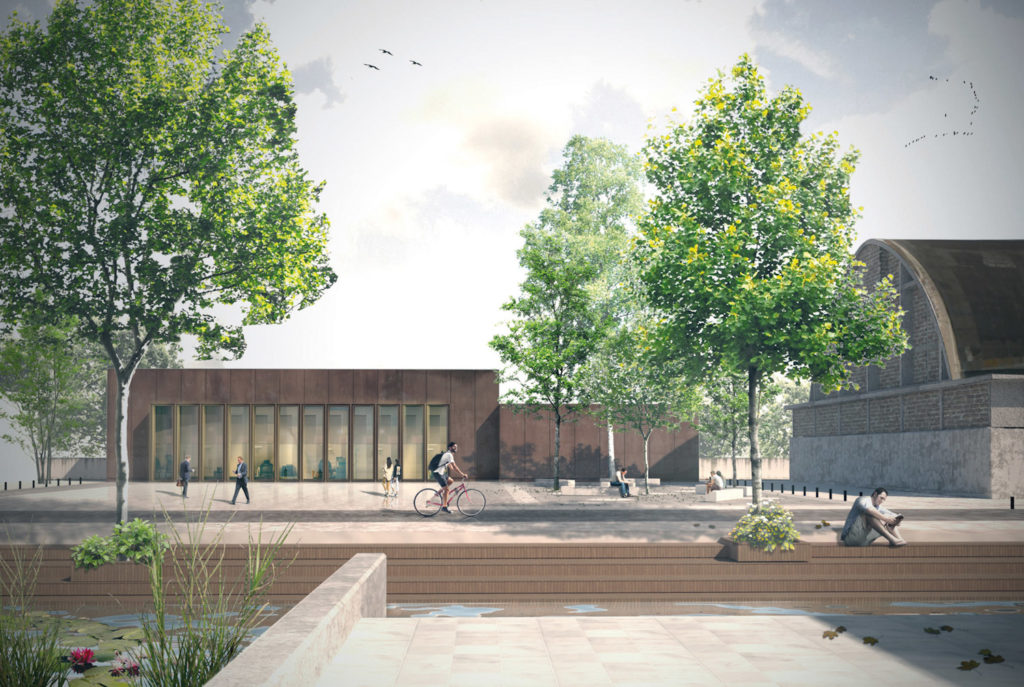 The main purpose of the following thesis is a critical reflection on the approach in planning and revitalizing post-industrial areas. In most cases, cities have developed within their borders such areas, adjacent to city centers, but separated from the active part of the metropolis. They operate monofunctionally and stand outside of the recreational and commercial life of a city. Usually, the role of industrial landscapes in shaping the collective memory of residents is neglected.
The Dock (in Italian: la Darsena) which is a part of the Candiano chanel, is the axsis of industrial zone in Ravenna. Its isolation from the cilt centre leads to stagnation and slow dying of this neighborhood. 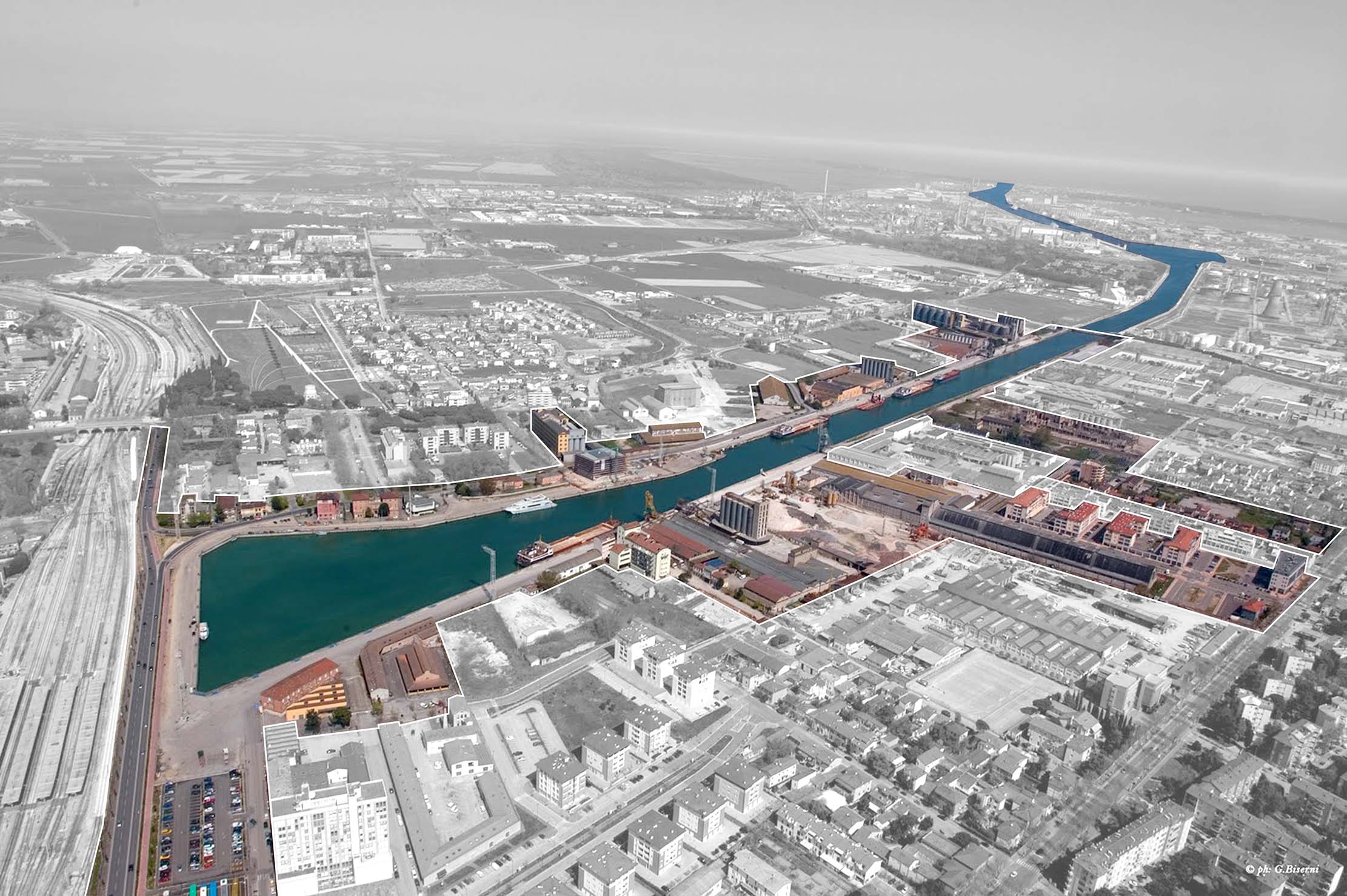 It appeared as a result of several transformations of a space, as well as more barriers (spatial, scenic and communication) appear. However, it should be noted that each barrier is at the same time a connection, and vice versa. So the factors that lead to the development of the city can be an obstacle in another direction. The aim is, however, to insert changes that allow connection in every possible direction - to sew the industrial area together with the city and provide a new, friendly and functional space to residents. It can not fail to notice an effort of the municipality in the process of bringing this area to life. However, plans are extremely ambitious. Each of them assumes transformations throughout the entire area and proposes to get rid of the most of the factory buildings, except those with an undeniable historical value. The question is, however, what determines the identity of the place and how to assess the importance of buildings. Do only old historical ones have the right to create the identity related to the place and worth protecting? I suppose that destroying the particular heritage, creating another repetive district it is difficult to bond the inhabitants with their place of living. That is why I assumed in my project, as a priority, preservation of post-industrial infrastructure and work within the limits of ​​public space.

When defining a shape of the project, I tried to fit new structures into the spatial context and find an analogy in exsisting forms, also by referring to history. Ravenna is a city strongly related with water since its inception. In order to use this factor as an oppportunity, I focused on two actions - creating public space on water and introducing water into public space. Darsena became the compositional axis of the entire establishment - an extension of Via Albertoni - the most important commercial street in the city. Similarly to the network of perpendicular streets in the center - on the other side there were designed canals that lead inhabitants of nearby estates to the main public space on the water. Each of them has a different character and fits into the various neighbourhoods of Darsena. Their location comes from the analysis of barriers and accessibility. Another assumption is to create a perpendicular connection between the two banks of Darsena but simultaneously to allow free passage of ships and yahts from the port placed in the first channel. This connection will be created by two elements, permanent and mobile. The solid parts are "half-bridges" with greenery and roofing, for walking or relaxing. The movable element is a barge floating along the canal, between consecutive stops. It will serve as a means of transport and connector. Only meeting these two elements will allow you to reach the other side of Darsena. The barge will fill the gap between separa 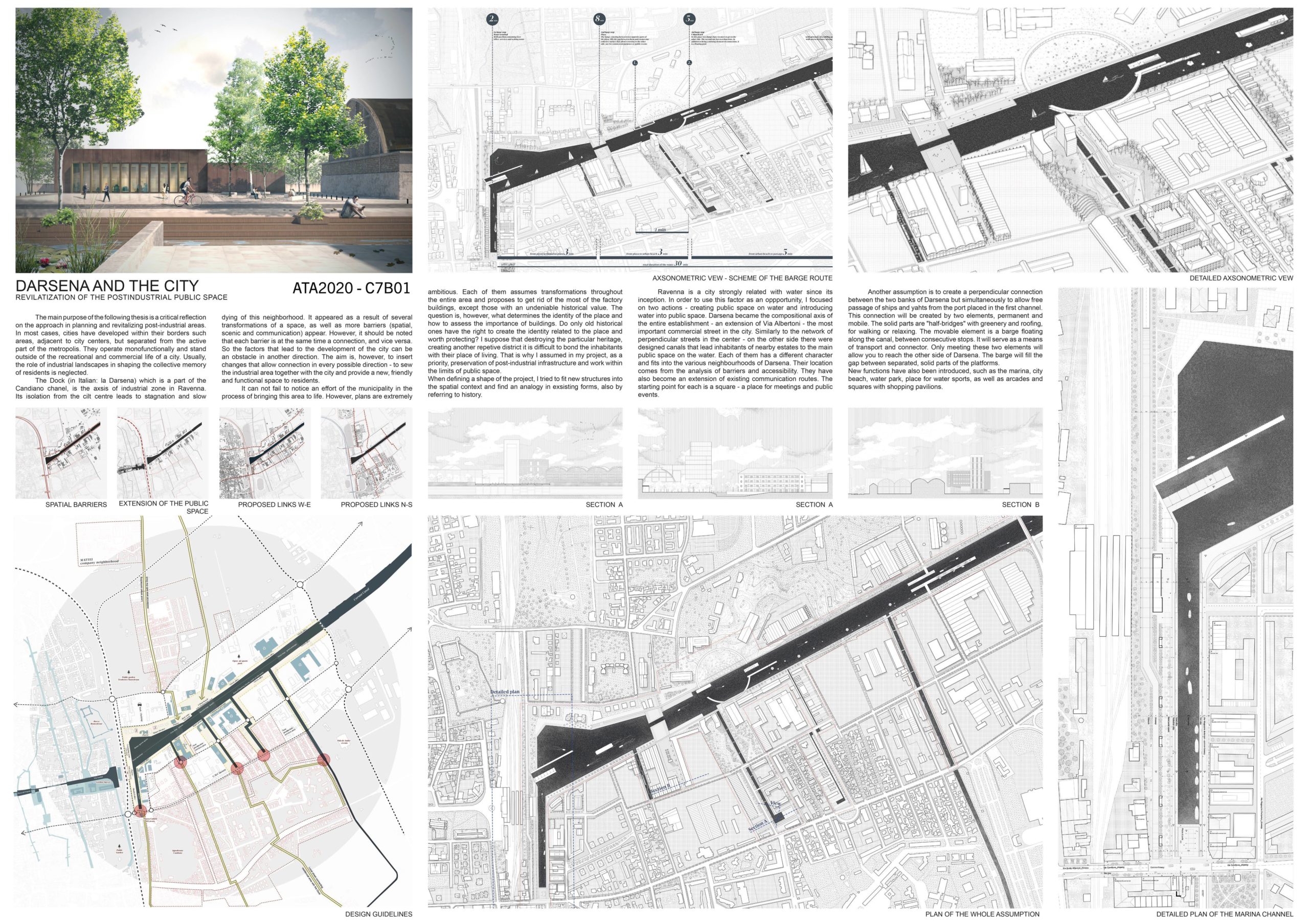 My name is Agata. I am a young professional, just gaining experience in the field architecture. I discover and develop my passion for architecture whenever traveling and changing place of living. However, despite my delight for architecture and works created by human hand, I appreciate the beauty of the natural world the most. In architecture as well as in day-to-day life, I always try to act with respect for environment and to use its gifts responsibly. I try to introduce greenery to every project because I think that creates the right conditions for human life. In addition, I am an big enthusiast of urban planning and a broader view of architecture, not only from the perspective of the single user of the biulding but noting its impact on public space and the perception of the community. My dream for the future is to run my own studio where I can develope ideas in my own way.
FOLLOW
MESSAGE
LOGIN TO LIKE
[pro_ad_display_adzone id='2269' ajax_load='1' info_text='Advertisement' info_text_position='' font_color='#' font_size='11']