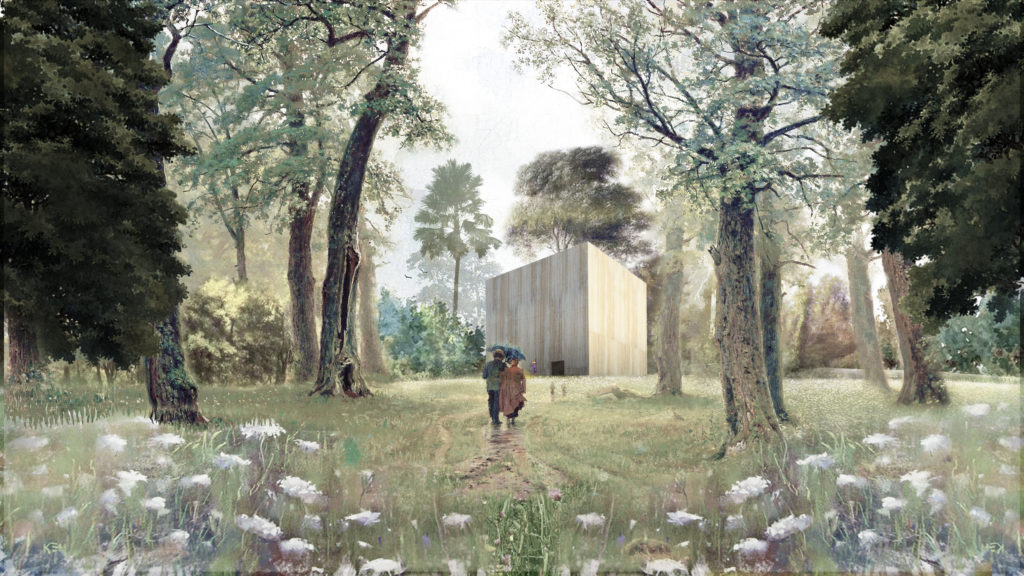 Thousand years after the first human settlement, the afterlife seems to keep a relevant meaning for any culture in the world. However, the XXI century marks a new challenge. Contemporary cities have a rich diversity and a non-stop growing population. On the other hand, this century is framed with an existential crisis on its spiritual character. Despite perceived cultural and institutional decay, there is still a genuine search for an ethical epistemology that relate us to the afterlife and to others who think, live and exist in different ways than us. In other words, by exploring existence, how we can embrace diversity and share new sacred secular places that keep relating society to the afterlife?

This project is in Villahermosa, one of the most religiously diverse cities in Mexico. In a country with a large catholic community and a rich culture that celebrates death. This project addresses the transcendence as an architectural issue which features a narrative for the human condition. The place was designed as a dichotomic metaphor of immanence and transcendence, life and death. Since, cemeteries are a collective representation of the principles of any community, three epistemic-axiological principles were studied in the design process: environmental relationships, culture of peace and materiality exploration. Environmental relationships on how form follows nature This thesis focuses on exploring the concept of afterlife within a specific Latin American context. So, the cultural richness was taken as an opportunity to blend the cultural expressions and natural components as values for a new cemetery-memorial feasibility study. Assets such as proximity, location and practices, as well as landform, water features and land use were taken. Finally, indexed weighted factors were combined into a final feasibility map from which the site was selected. The landscape helped to construct a narrative of indoor and outdoor relations while celebrating southern tropical Mexican landscape through a visual sequence. On site water features generate dialogues between the burial ground and the irregularly placed ruin-like architecture spaces. 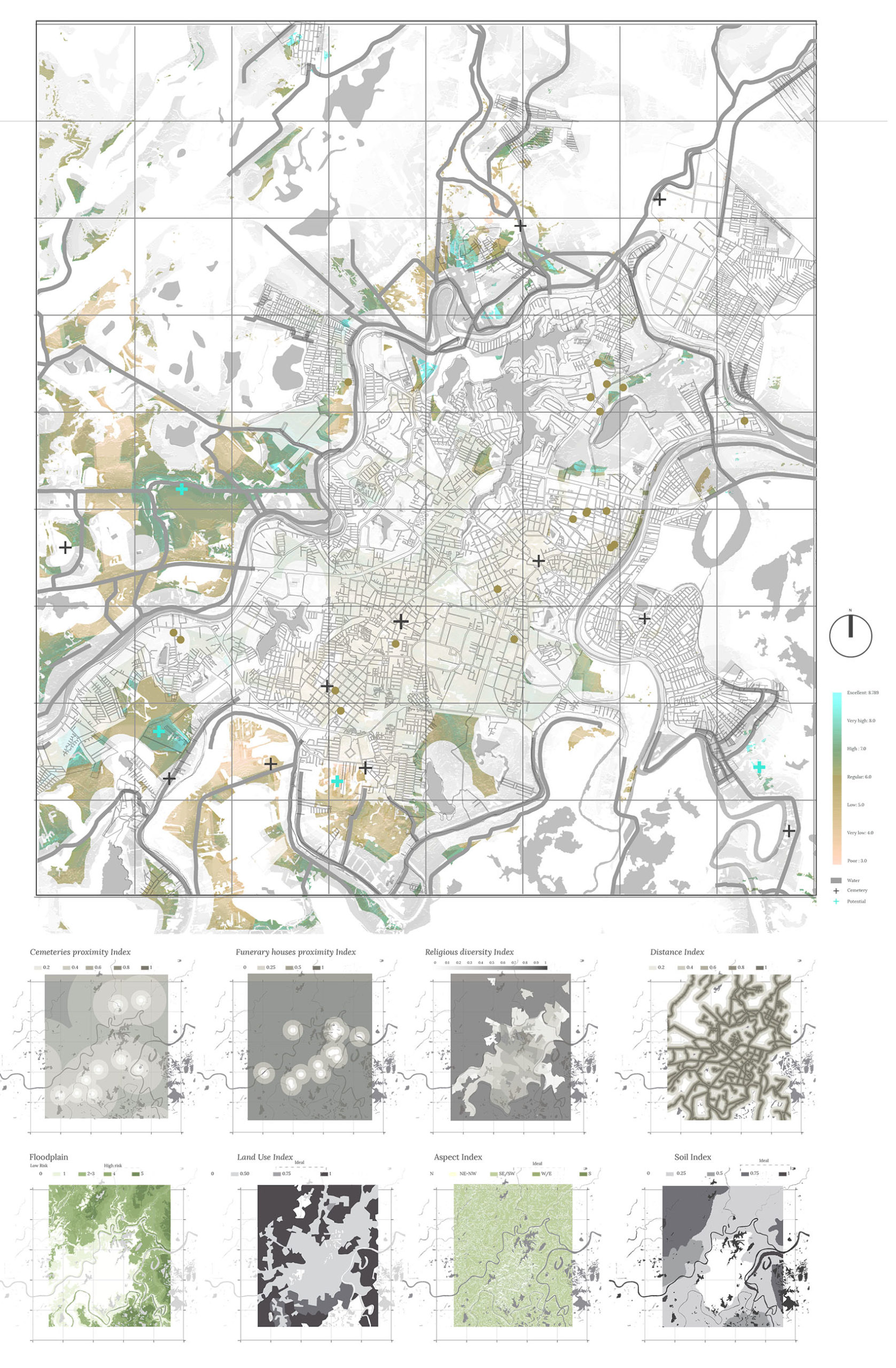 Materiality on how form affects narrative. There are four main spaces on the cemetery: the crematorium, the oratory, the mortuary and the crypts. The program is divided in two levels according to the mortuary operational activities and the social activities on the first floor, while typology provides a silenced roof space where crypts and ornamental gardens can coexist to contemplate sky. The main material in project is pigmented concrete. The experimentation of this material varies on color and disposition in structure to create washed layered concrete walls. Since no wall is the same, it also texturizes the narrative of a solid but diverse community that flows and changes through time. Culture of peace was the value that explores on memory and how form follows culture. In this research the historical social violence in Mexico was studied as a drive to create memorial places for the victims, the gone and the living. This also organizes the landscape as a living organism that continuously dialogues with a raw silent architecture that continuously work as an existential place and as a reminder of human conditions. 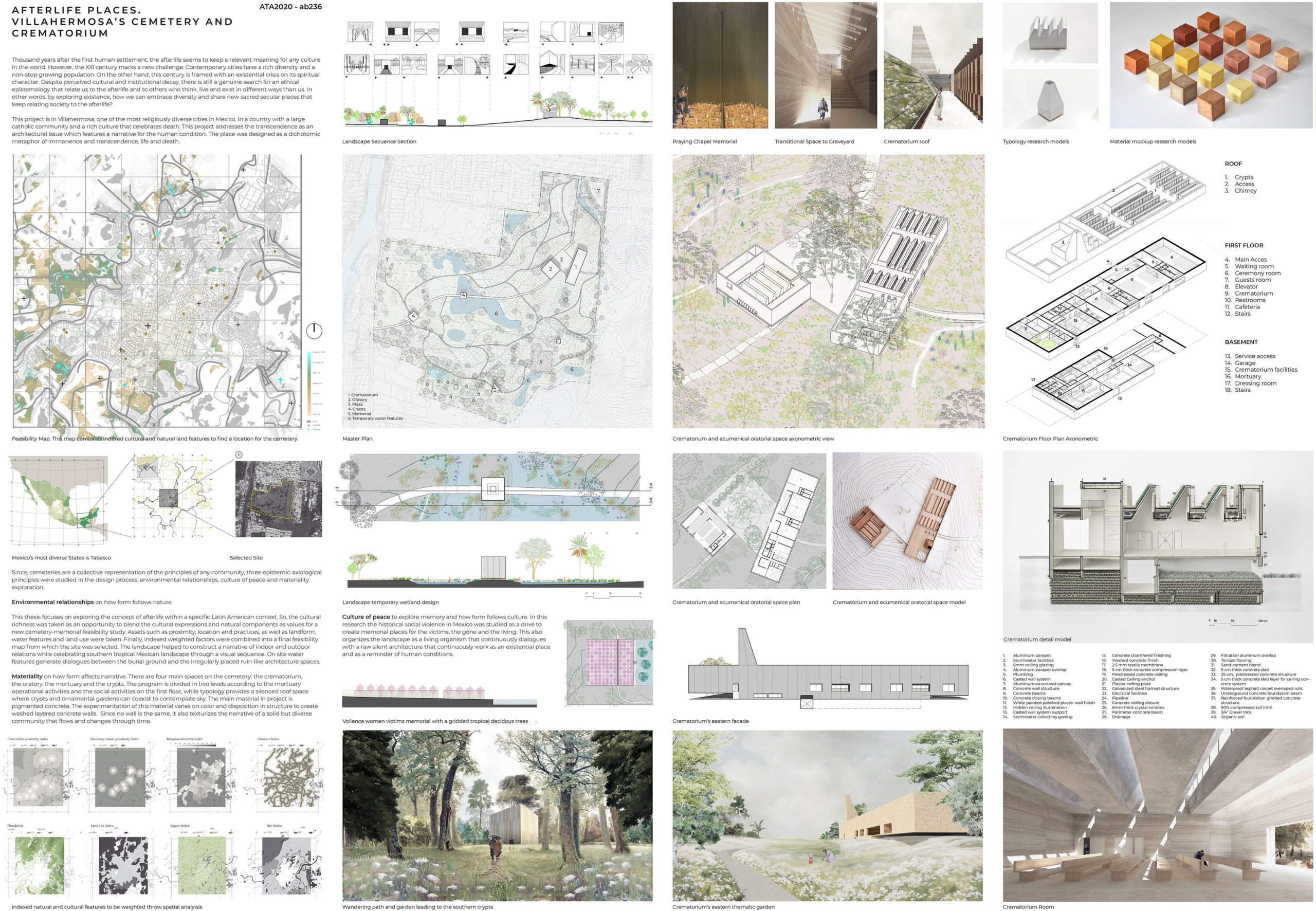 I am a passionate for landscapes, social justice and equity. I think architecture as a driver of change. Therefore, I founded a small architecture practice named MUNA in which my colleagues and I try as much as possible to work closely with people through inclusion, working with memory and with a sense of respect for all interacting beings such as nature, materials, people and their stories.
FOLLOW
MESSAGE
LOGIN TO LIKE
[pro_ad_display_adzone id='2269' ajax_load='1' info_text='Advertisement' info_text_position='' font_color='#' font_size='11']