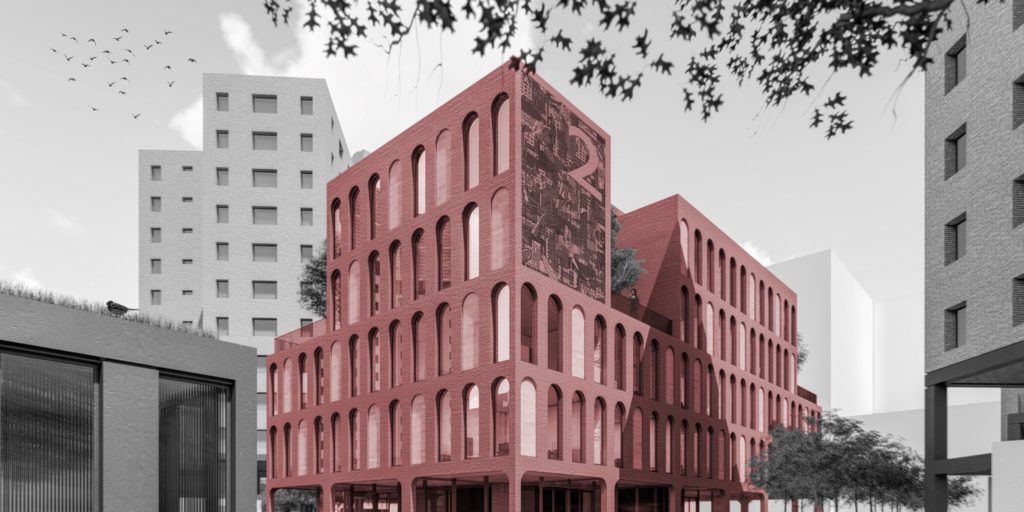 Low-income areas of developed cities such as New York are increasingly under threat by gentrification. This has created a lack of affordable housing for the locals of these areas, marginalizing them by either forcing them to live in the periphery, or be crammed into social housing projects. When you pair this problem with neoliberal governmental policies that have decimated social housing programs, these low-income families end up living in squalor, spatially manifesting the increasing divide between the rich and poor that defines our society. 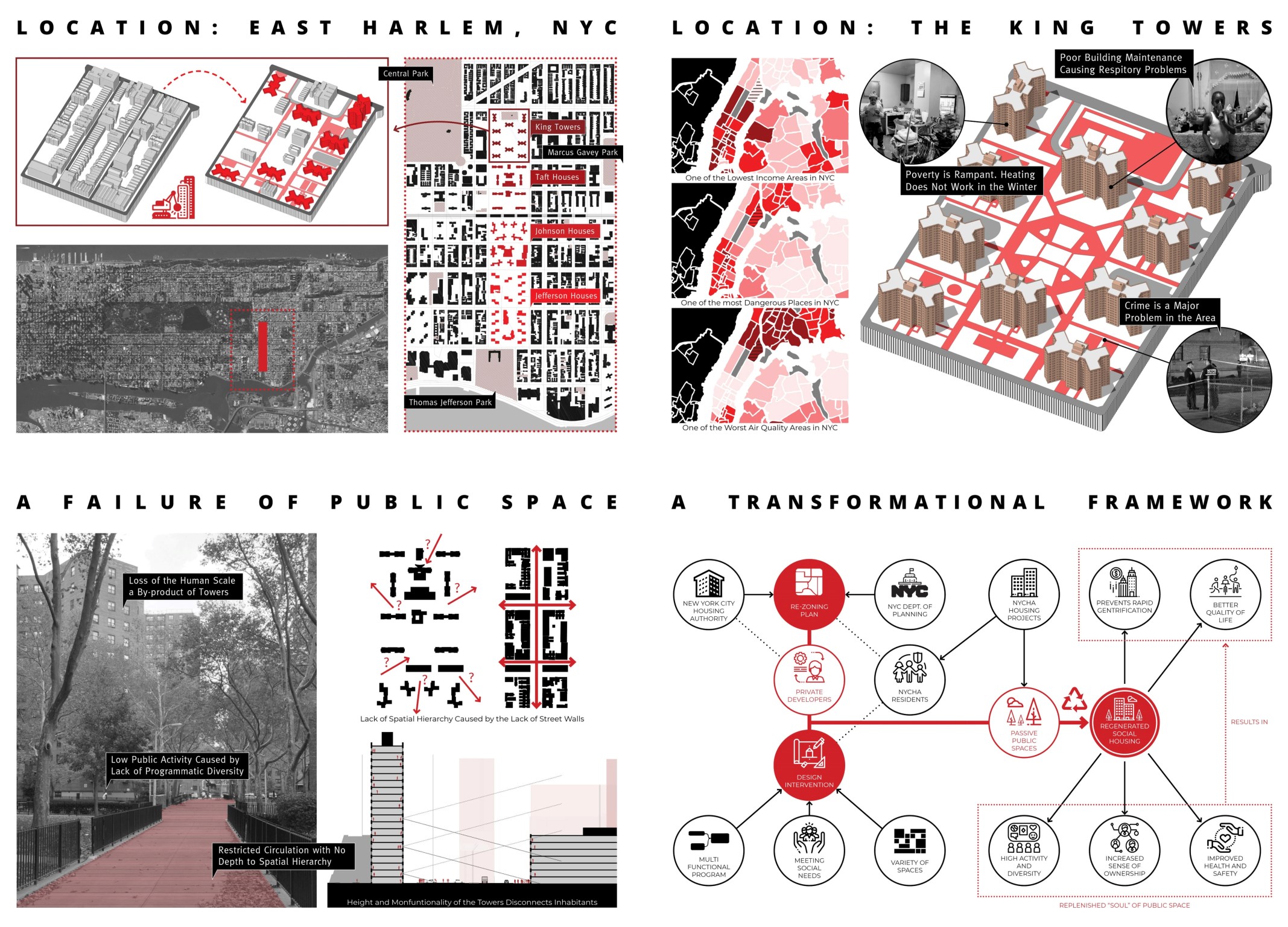 There is a great need for a method for countering the ill effects of gentrification by protecting these disenfranchised inhabitants. This can be achieved with a transformational framework that tackles issues of monofunctionality, scale, and safety that exist in social housing projects. It should also act as a rehabilitation blueprint that activates their public spaces, increases their quality of life, and protects their rights to the city. The location of the proposal is in East Harlem, a project called the King Towers. This neighborhood has major issues with crime, air quality, and poverty, all while existing at the corner of Central Park - literally the spatial realization of social inequality. The site has a repetitive tower typology that is typical of NYC social housing, and therefore could act as a blueprint for other projects in the city. The single large public space also makes a proposal more flexible to implement. In order for a rehabilitation intervention to work within the social housing projects, there needs to be a proposal that is beneficiary to all parties involved. Each one of the stakeholders have a motivation to work together to find the most optimum solution regarding various issues, such as responsibility, funding, and their role within a regenerated social housing project. Using an egalitarian approach such as this will nourish the “soul” of their public space. 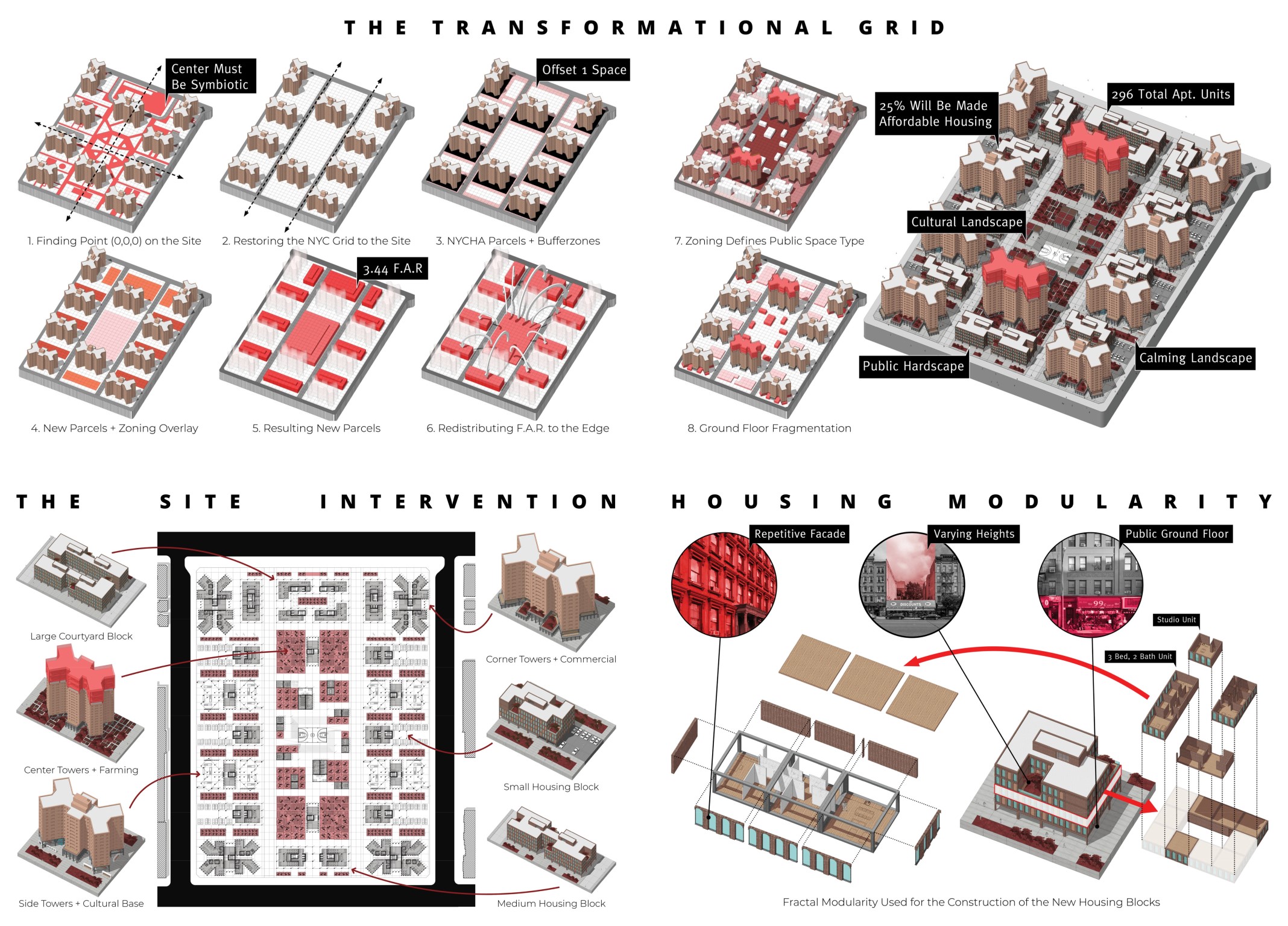 Overlaying a grid over the site will transform the public domain from a space that is passive and void, to one that is vibrant and full of life. The grid sets out to provide design solutions at multiple scales, mostly due to both its ability to be modular and flexible at the same time. Public spaces will become more active due to an influx of new functions, in turn creating a hierarchy of various public spaces, better sense of a human scale, and ownership for the inhabitants of the projects. The transformational grid provides a clear separation of public and private, as it removes ownership confusion that existed before. New apartment buildings have their structure dictated by the grid, allowing for modular and adaptive solutions for future development, while also increasing activity with ground floor arcades. Palimpsest interventions in the towers achieves similar goals by providing large entrance lobbies, in combination with open spaces that adapt to the wishes of the inhabitants. The preexisting concept behind the greenery is based on a modernist binary relationship between public and private. Like our current society, layers of complexity are needed to add diversity of people and functions. A goal of the grid is to create an active landscape that is free to the public realm. This was achieved by adding urban gardening to the landscaping, where residents and locals alike can come and grow, strengthening the bond between the resident and their neighborhood. 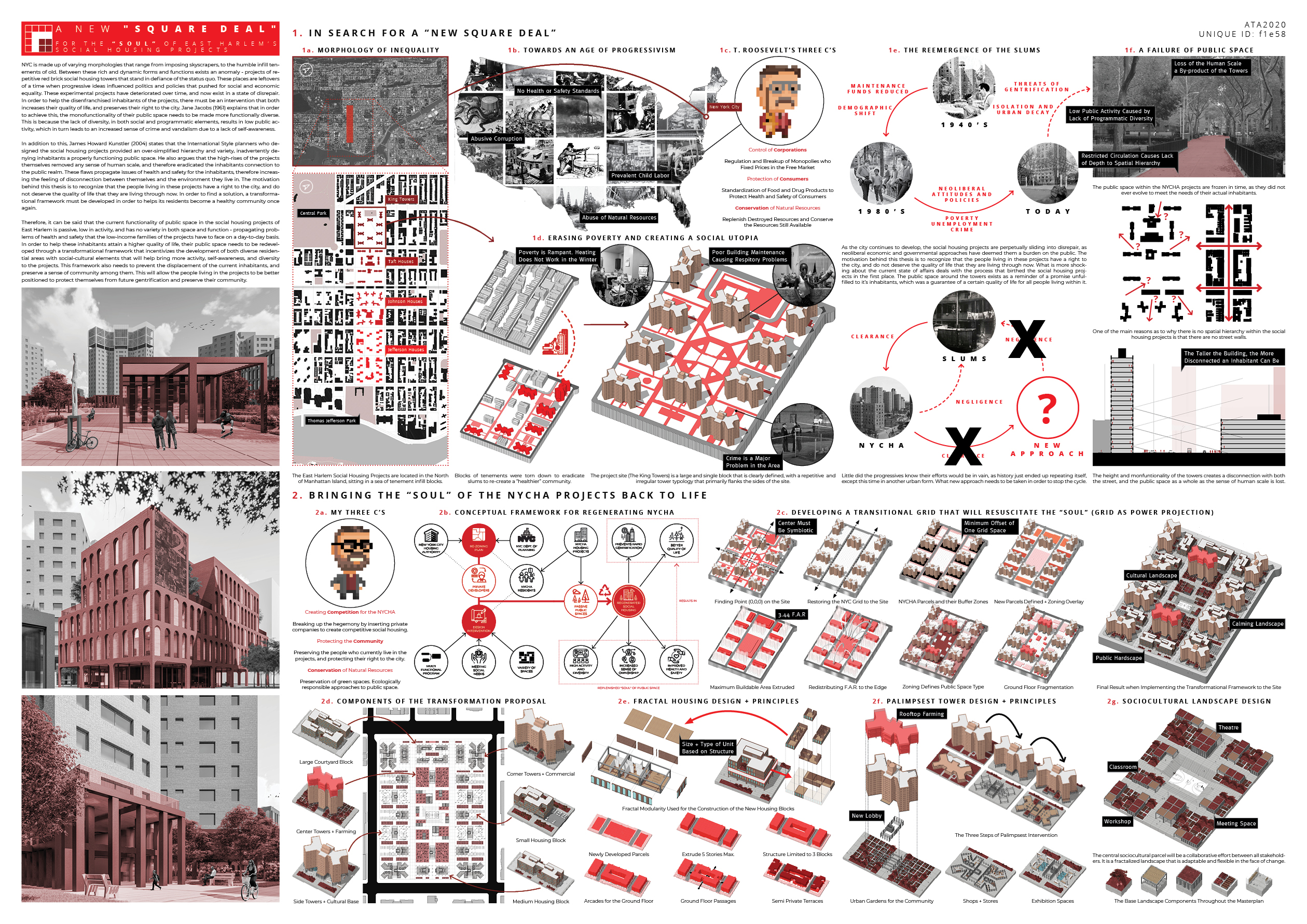 Osman Mürsel Ural is a Turkish/American architect and urban designer with over 6 years of experience in various scales of design. He graduated with his MSc degree in Urbanism from TU Delft in 2019, and obtained his bachelor’s degree in Architecture from The University of North Carolina at Charlotte in 2011. He has experience in many offices, such as De Zwarte Hond (NL), Jvantspijker and Partners (NL), Aboutblank (TR), and Emre Arolat Architects (TR).
FOLLOW
MESSAGE
LOGIN TO LIKE
[pro_ad_display_adzone id='2269' ajax_load='1' info_text='Advertisement' info_text_position='' font_color='#' font_size='11']