water reverie . between the real and imagined ideal

We’ve been watching devastating realities, where unpredictable numbers of hectares are burned, countless people and animals lose their lives trapped by the fire and devastated by smoke. The Flames have brought darkness. A gray and dark scene creates an undesirable landscape.Our Utopia Island suffers every year due to this problem that requires a new study and a new thought in fire prevention. And, it is up to us, beings of the present, to fight for such future. Therefore, having the problem of forest fires, this observation consists of an opportunity to (re)think a sustainable element, born from an imaginary awakened, capable of minimizing risks and triggering means of prevention.
A brave new world (re)borns… 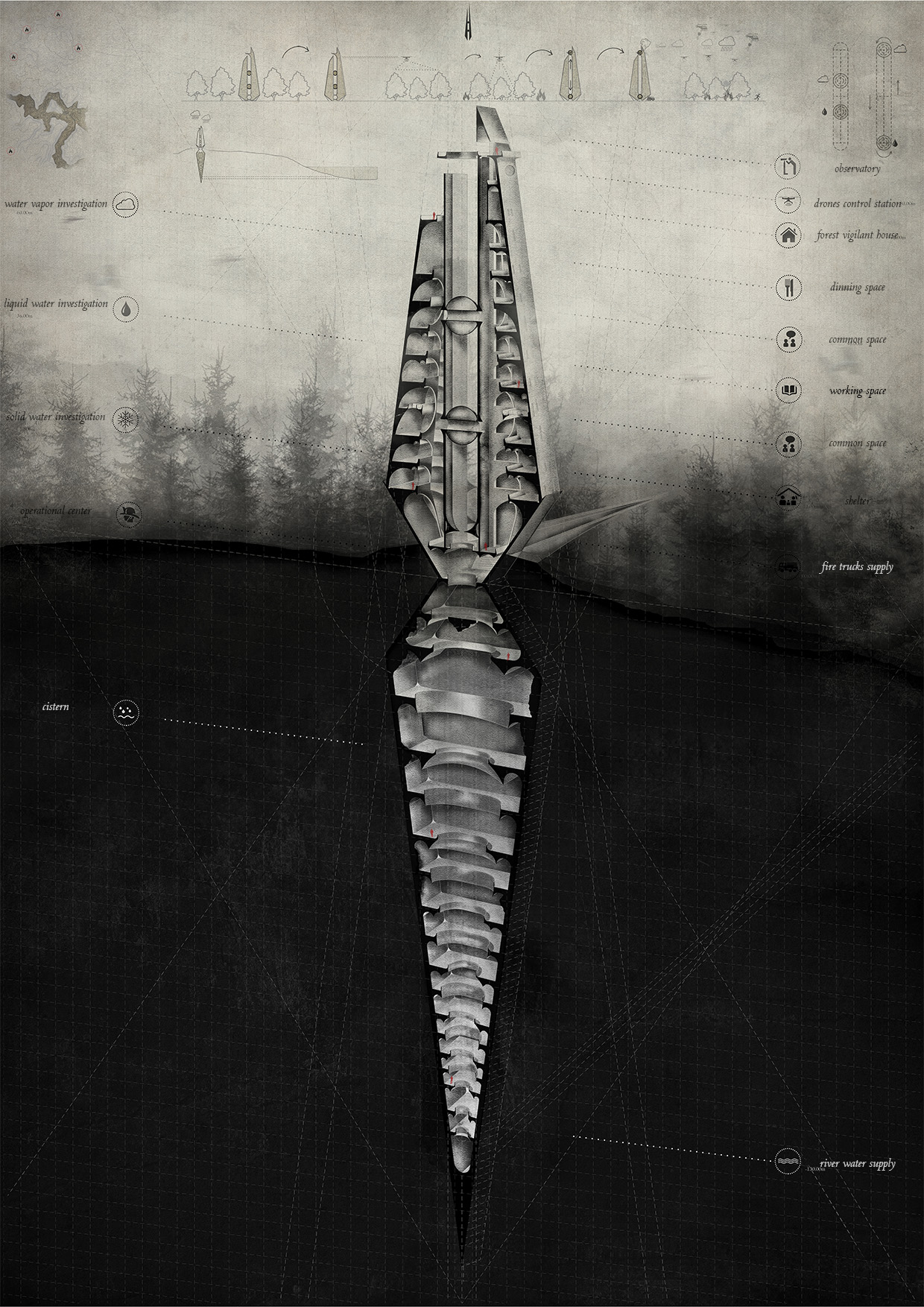 Coming from an unknown, mythical and subterranean world, where nymphs and nereids dive into the depths to guard their treasures... water awakens the mind of the dreamer who imagines it, its poetics and its mystery, and thus creates its own essence for nature. The thesis presented is devoted to the reading and investigation of utopian thought, as a moto for change and a generator of new concepts, places and practices imagined in a flawless future. The present reality that surrounds us expresses an unsatisfactory feeling inherent to Humanity. The imagined future we live in, doesn't coincide with the one we idealized. From Plato to the present, the human being has searched for an imaginary, a different topus. This desire to imagine progress, to dream of reaching the 'unreachable', to think of a different world, has allowed the evolution of the human being and our Utopia Island. Therefore, it is mandatory to return what was lost. The strategy consists of various towers, with three different typologies, in the forest of Pedrógão Grande, Portugal. The towers are capable to interact with the environment, collect water from the river and from the rain and communicate with each other through their height and gps network. Therefore, the tower has water investigation spaces, a cistern connected to the river, an operational center command for the firefighters, spaces for the community, spaces for drones and serves as a shelter for the people. 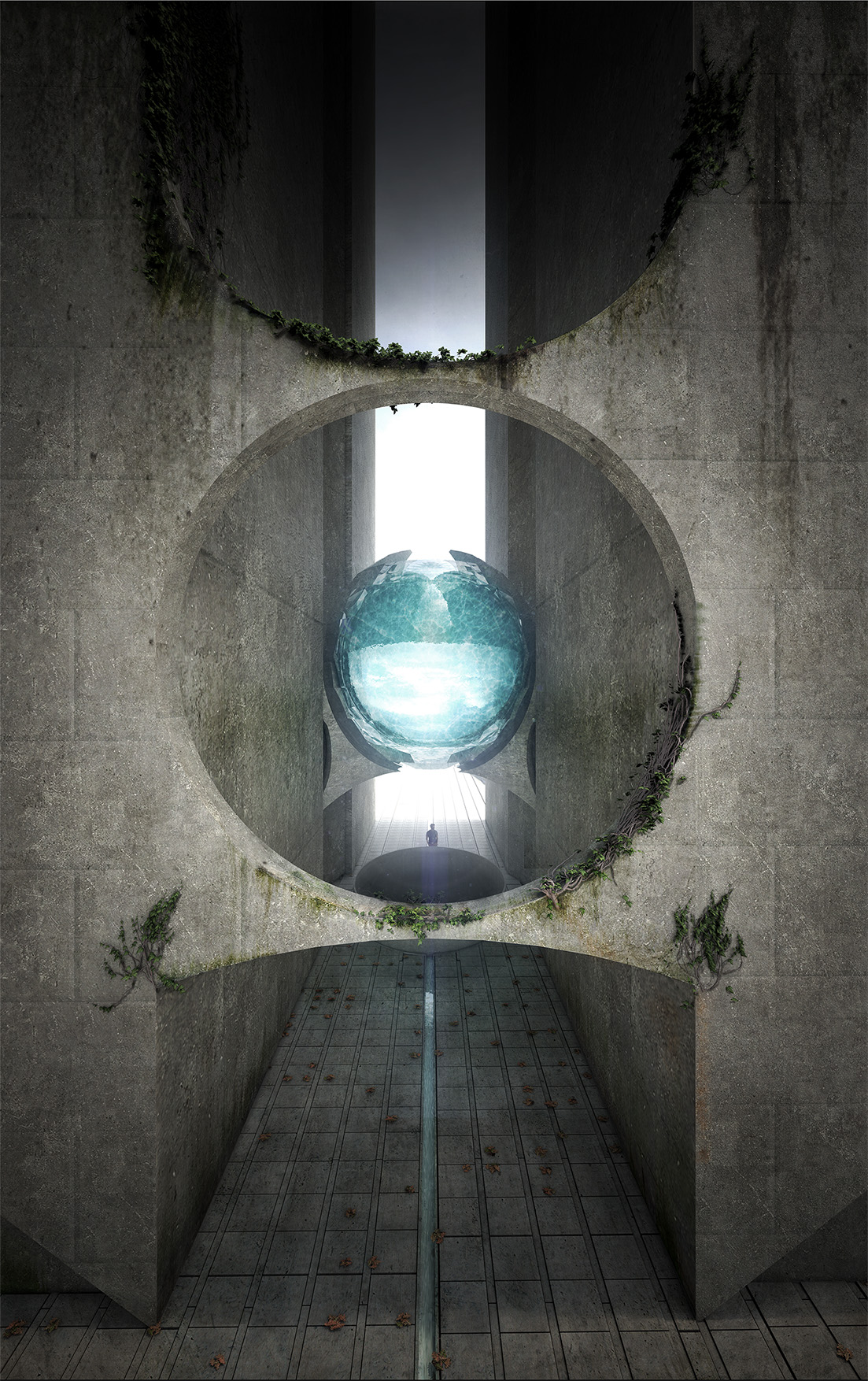 The dreamer has the urge to evolve, to fly. It holds its own will, of a poetic reverie that forms human thoughts, capable of changing a world... This water collected is stored in the cistern and in the spheres. The lower sphere, with approximately 240,000 liters of water, can supply 50 fire trucks. The other sphere is capable to create raining clouds, in order to restrict the danger. The contact between liquid hydrogen and liquid oxygen would cause the formation of rain clouds. Also, drones, with gps satellite systems, could throw sodium iodide into the clouds to accelerate the rain process. When the alarm is triggered, through a funicular system, that allows counterbalance displacement, the water sphere moves down to supply the fire trucks, and the cloud sphere moves up to release them, also serving as a warning and communication alert. This desire to imagine the future is born of the need to innovate the present. We are made of dreams. 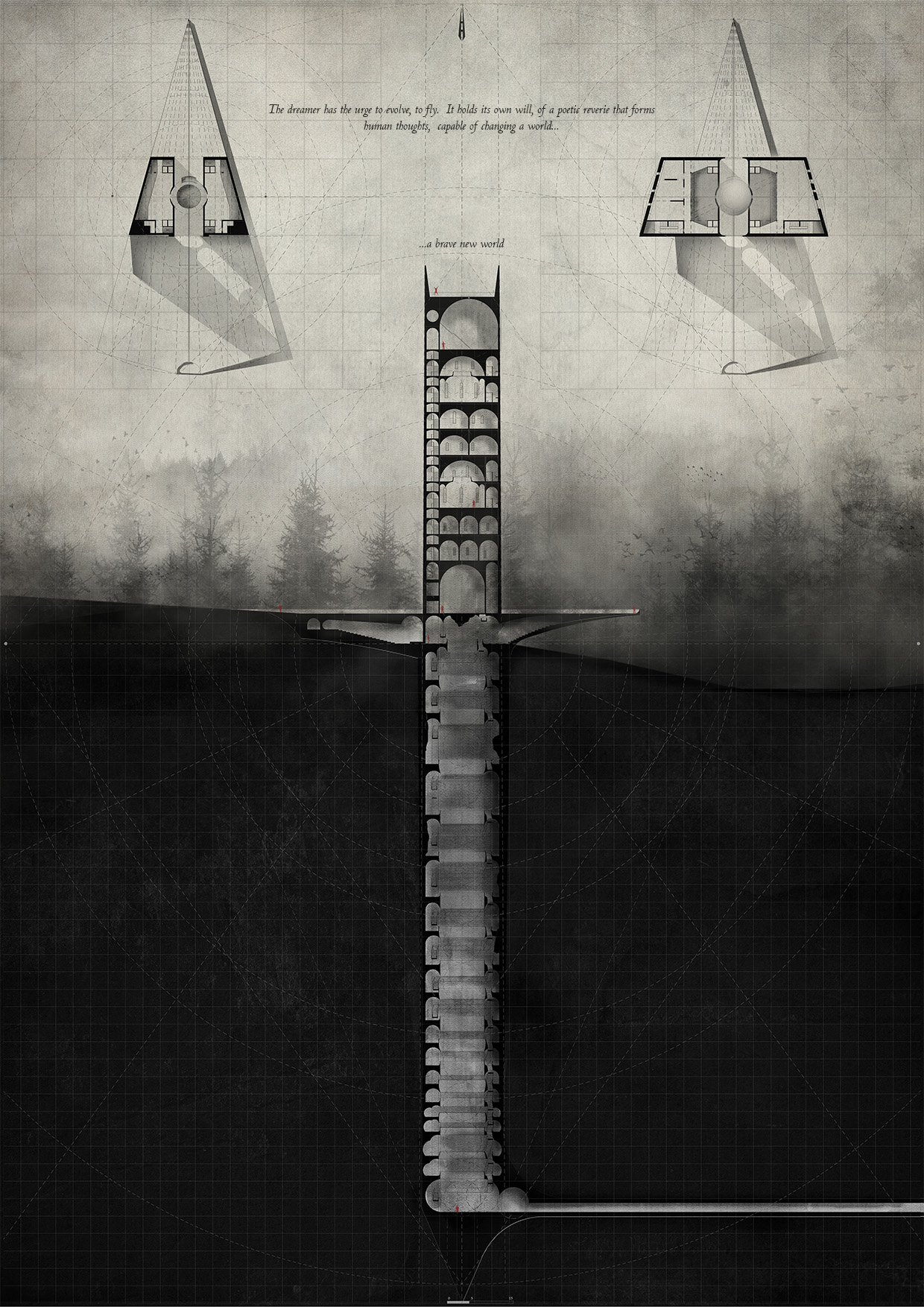 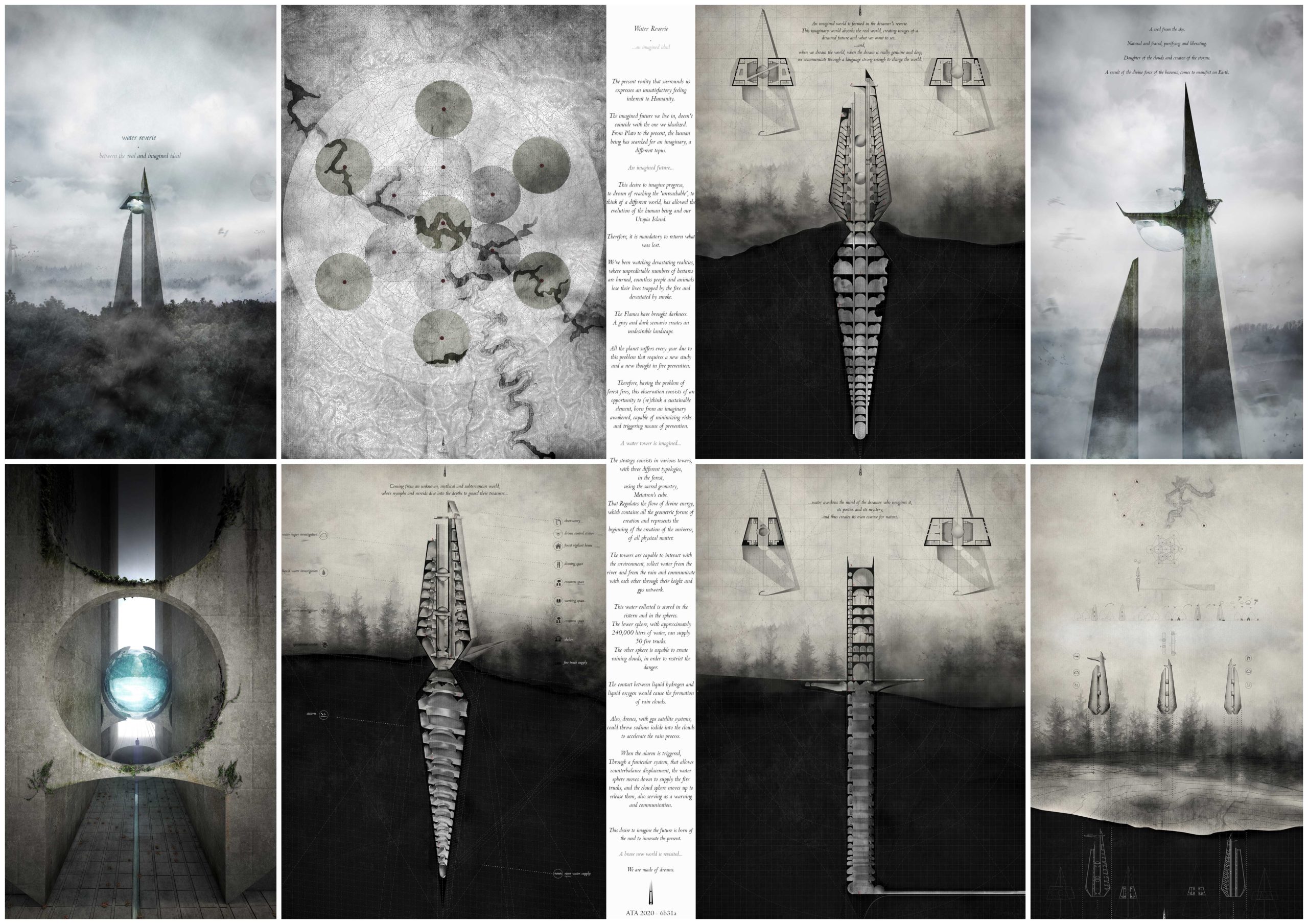 I dream. In this imaginary and poetic life, an adventure awakened by a reverie. A reverie moved by the strength and ambition that was formed during the academic experience, trough the constant search for a creative and imaginary sense of what can be designed and projected. A reverie that explores the future of our Utopia Island. The dreamer has the urge to evolve, to fly. It holds its own will, of a poetic reverie that forms human thoughts, capable of changing a world... A brave new world… Jose Pedro Serra
FOLLOW
MESSAGE
LOGIN TO LIKE
[pro_ad_display_adzone id='2269' ajax_load='1' info_text='Advertisement' info_text_position='' font_color='#' font_size='11']