The imperial cities of Morocco are surrounded by a system of fortification that determines its shape and outlines its internal development. In the Medina – the old part of Marrakech, with the logic of progressive filling of open spaces, the residential fabric often ends up just at the edge of the city wall, with the exception of a part near Bab Doukkala, the north-west gate of the city, in direct connection with the current bus station, close to the taxi stop area.
The whole system of the proposal wants to regain the urban quality to a part of the city that, despite its political location and its potential, today seems to be strongly neglected and underused.

The project here intends to improve and enhance the unused linear space, between the inner part of the walls and the urban fabric. This area is used as a parking and transit area, almost “no-man’s land” – underutilized and abandoned, with a high crime rate. The proposal is advanced by the re-appropriation of public space as an area destined to cycle-pedestrian paths, with changes in the road network and the massive extent of the abusive use of the internal roads as resting areas. The goal is to enhance the one that represents a Unicom throughout the walls. The project takes a close look at the entrance of Bab Doukkala and proposes the construction of a museum of the historic walls. The museum is part of the urban fabric, continuing its link, and communicating with the already existing Bab Doukkala museum. The heart of the museum is a botanical garden in the basement: The museum block maintains the same height as the residential fabric of the medina, communicating at street level with a square that opens at the center of the botanical garden, in front of the historical gate. PROJECT OBJECTIVES: – Enhancement of the Bab Doukkala gate, and of the historic walls; – Respect for the landscape features of the ancient fabric of the Medina; – Creation of visual axes along the green and qualitatively high paths; – The claim of public space as a pedestrian area; – Revitalization of empty and degraded spaces. 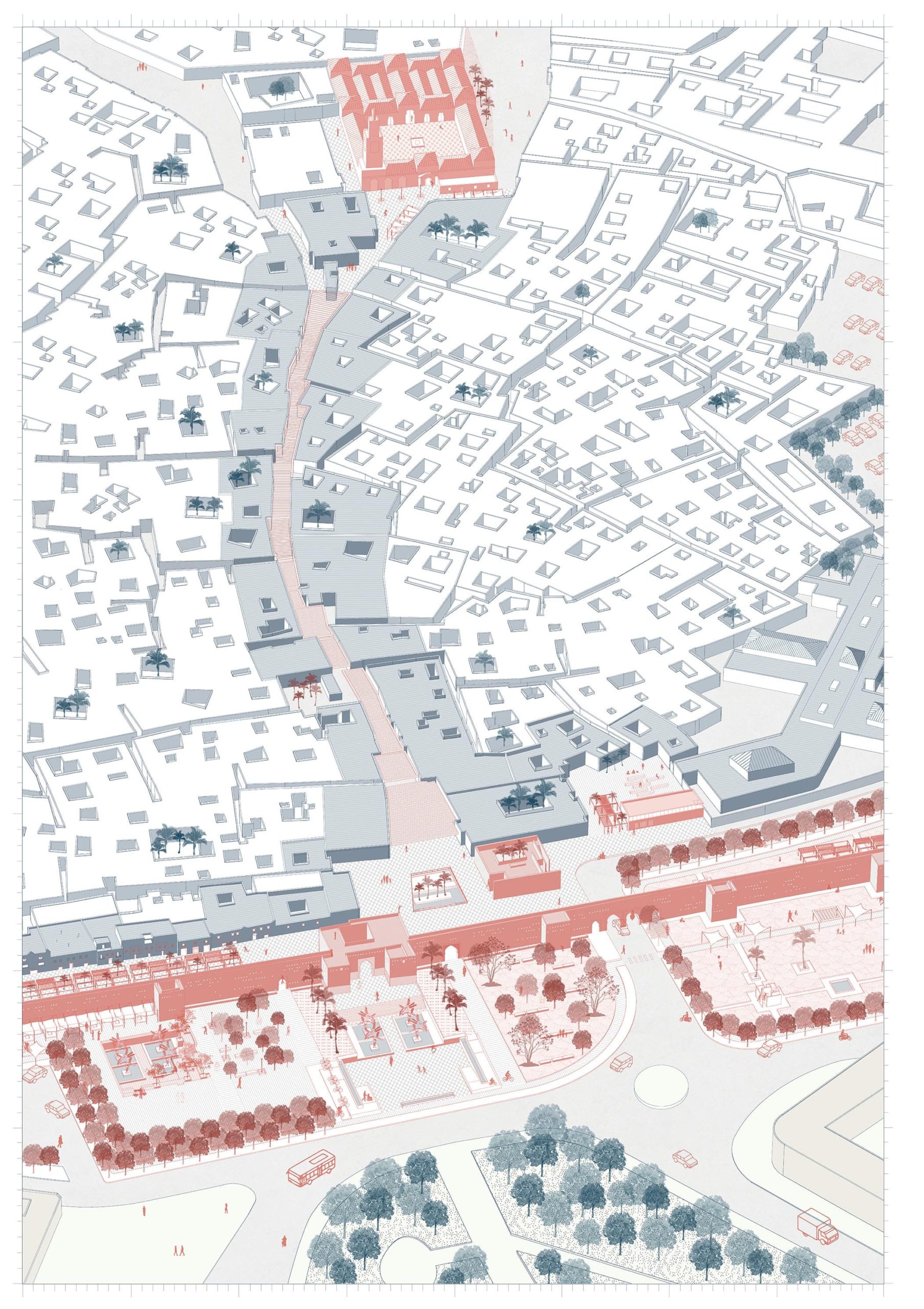 The attention is focused on the main objectives of the project concerning the redevelopment of an underestimated and potentially attractive area, which is located halfway between two opposing scenarios, the old and the new part of the city of Marrakech. The constructions are only a further contribution of value to the already existing context, which serves to emphasize the historical urban fabric and enhance the importance of the historic fortification. The system of open spaces plays a fundamental role not only for the re-appropriation of public space by the local population but also for the possible attractions linked to the tourist routes. The importance that in itself already has this place that is constituted by complex and multiple road connection systems, integrates the private transport with the public one in service to the city. Reduced and localized design interventions are deliberately chosen, which serve to emphasize the existing context by structuring it with the use of locally available materials, decreasing not only the costs but also moving away from possible scenarios that are too Westernized that would depersonalize the beauty of the Moroccan exotic landscapes, and they would break the charm of the red city. 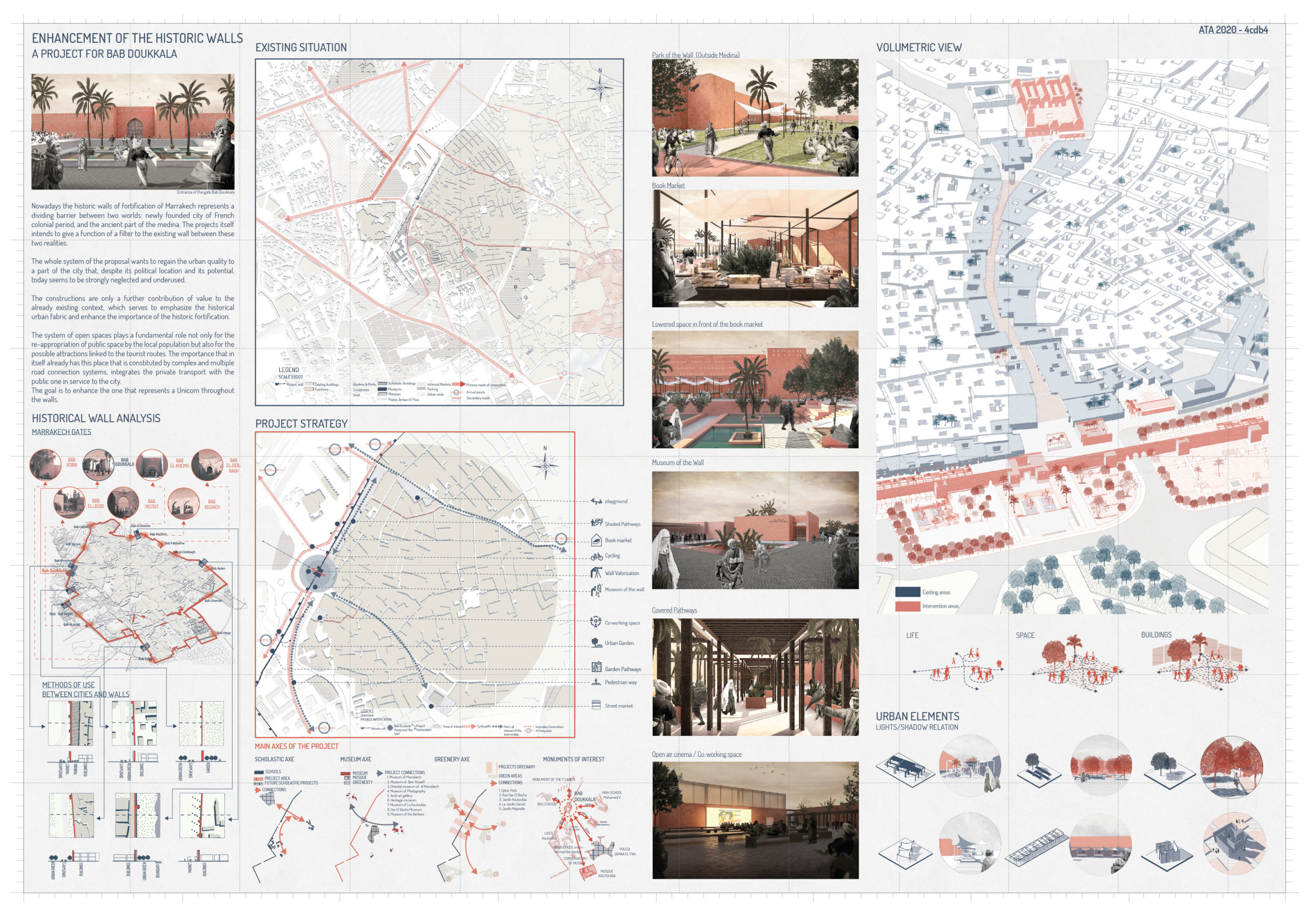 Graduated students of Politecnico di Milano collaborating for several projects in terms of the university and beyond.
LOGIN TO LIKE
[pro_ad_display_adzone id='2269' ajax_load='1' info_text='Advertisement' info_text_position='' font_color='#' font_size='11']