“The metaphor of life is rooted in architecture. To be born, to grow, to be is an architectural experience. Thus architecture is the biggest unwritten document of the history.” – Daniel Liebiskind
History has left us with many incidences and events that has lead us to what we are today. These incidences were a driving force for the better future along with leaving a trail of chaos in the lives of people.In great cities, the great buildings tell you things you don’t know and remember things which you’ve forgotten.
Mumbai being the capital of commerce had many mills which were the reason of survival of 9 lac people. But there were incidences that happened which not only took away their abode but also caused an uproar in the city’s balance.

Relevance in choosing Mumbai city - Since history of Mumbai has left it with many chaotic incidences like communal breaches, mill strikes, terror attacks, bomb blasts, Mumbai riots etc. and many more, the city is left in an abyss situation. This has led to a need of tranquilizing the temperaments of people in present situation and show the paths of positive life and not just progressing into a blind life oriented with money. Since the hypothesis says “Architecture by tranquilizing temperaments can resolve chaos in human minds to resolve human relations for a better world” and the thesis intends as, - To design an architectural space that touches hearts of people to bring about a positive change in the humanity, - To resolve chaos in the minds of people by designing tranquilizing spaces, - To send a message of peace to the world for better life, - To show life beyond what we see today so the human relations become timeless along with references of case studies done, the site is chosen in Dadar with the following rationales, - located where people of all age and class could access, - easily accessible with respect to transportation facilities, - of historical importance, with context of nature [ water and green space], - of approx. 6 acres of land - amidst urban space, - around existing congregational spaces, - an influential site with respect to issue discussed, - with proper traffic network for efficiency 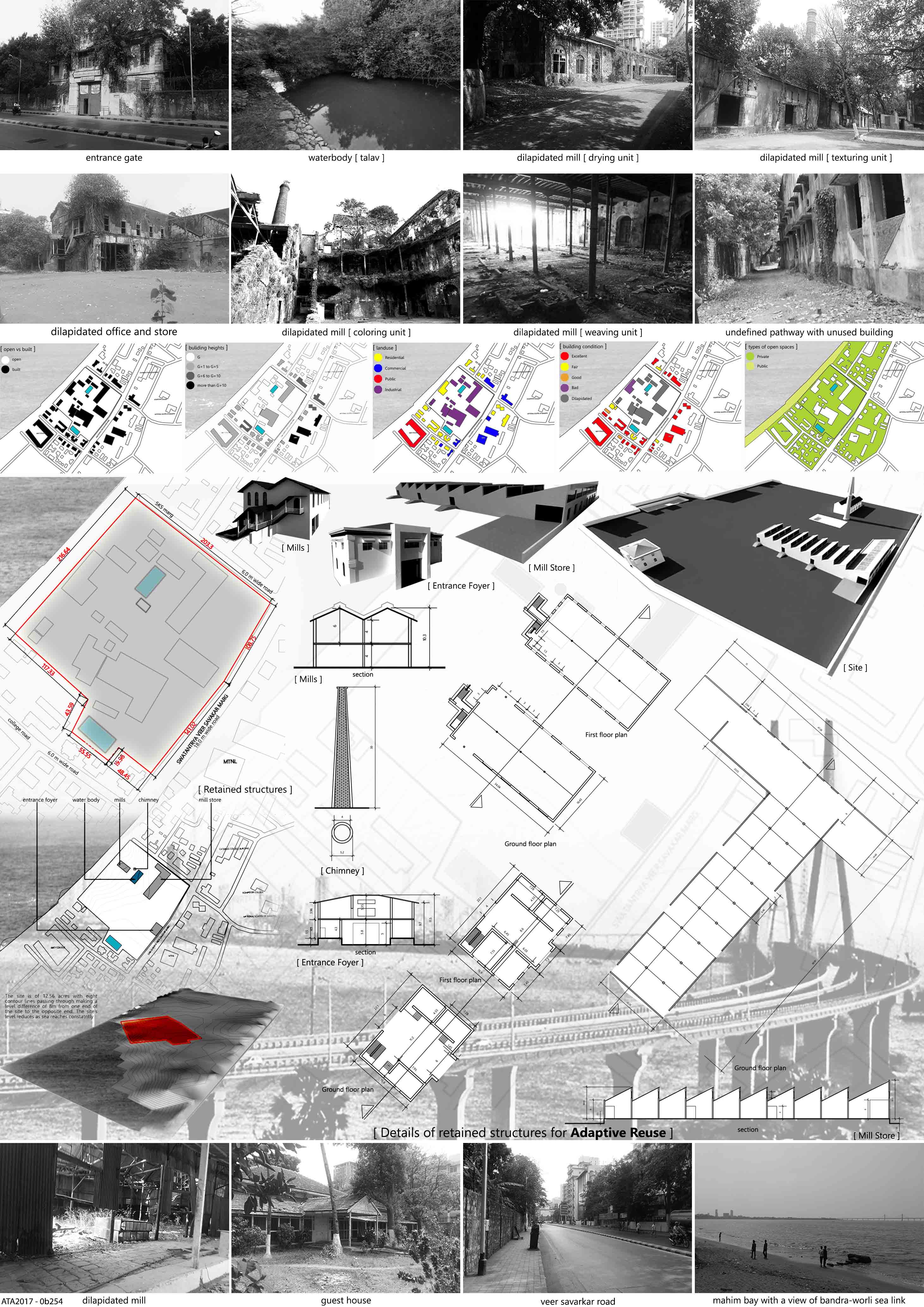 C O N C E P T - “Tessellation of the Fourth Dimension” Here time is take as a tool to reveal the wisdom for the society. the past, the present and the future is connected through play of events abstracted through architecture. The concept of the design drives on the following two points. - Retaining the old structures to portray the past by adaptive reuse[ The retained buildings will be adaptively reused i.e. mill to museum. The museum will portray the mill strike 1982 with its consequences and repercussions] - Introducing a new architecture of hope[ A form based structure will pierce through the retained structures acting as an extension to the structure thus creation contrast to the retained ones by overpowering in terms of form yet respecting them] Museum of Chronicle [ Past] - The Museum of Past reveals the consequences the Mumbai mill workers went through. Museum of Rife [ Present] -The Museum of Present portrays the effect of shutdown of mills Museum of Wisdom [ Future] - The museum will portray the restorative thoughts like Empathy,Tolerance, Respect, Integrity and Inclusiveness Green and sustainable design is achieved through – 1.use of fly ash bricks for the museum for future 2.Retaining the existing buildings and adaptively reusing 3.designing underground spaces to have more open spaces on ground floor and thus introducing urban spaces to make an efficient design where Museum becomes a part of people’s life. 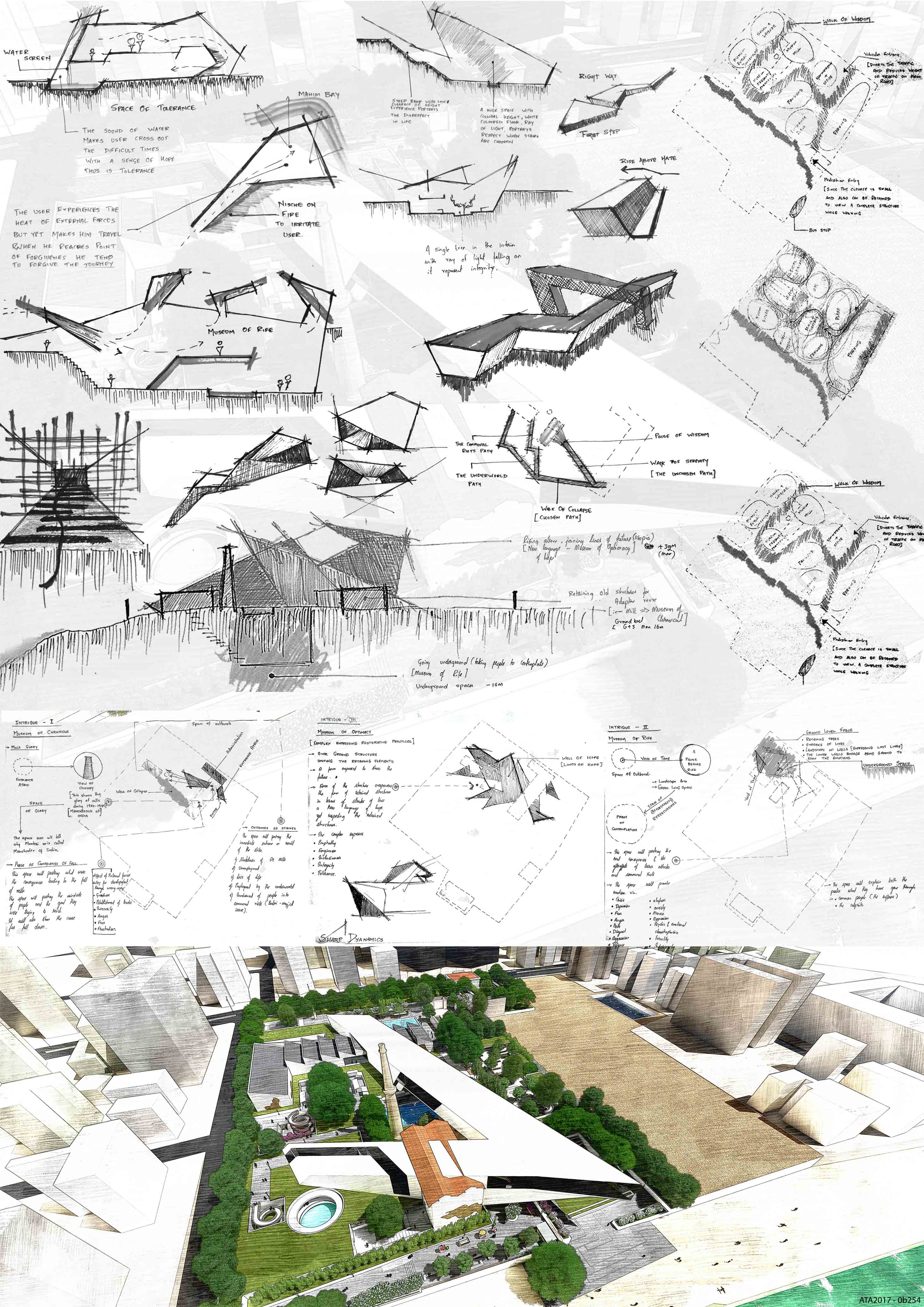 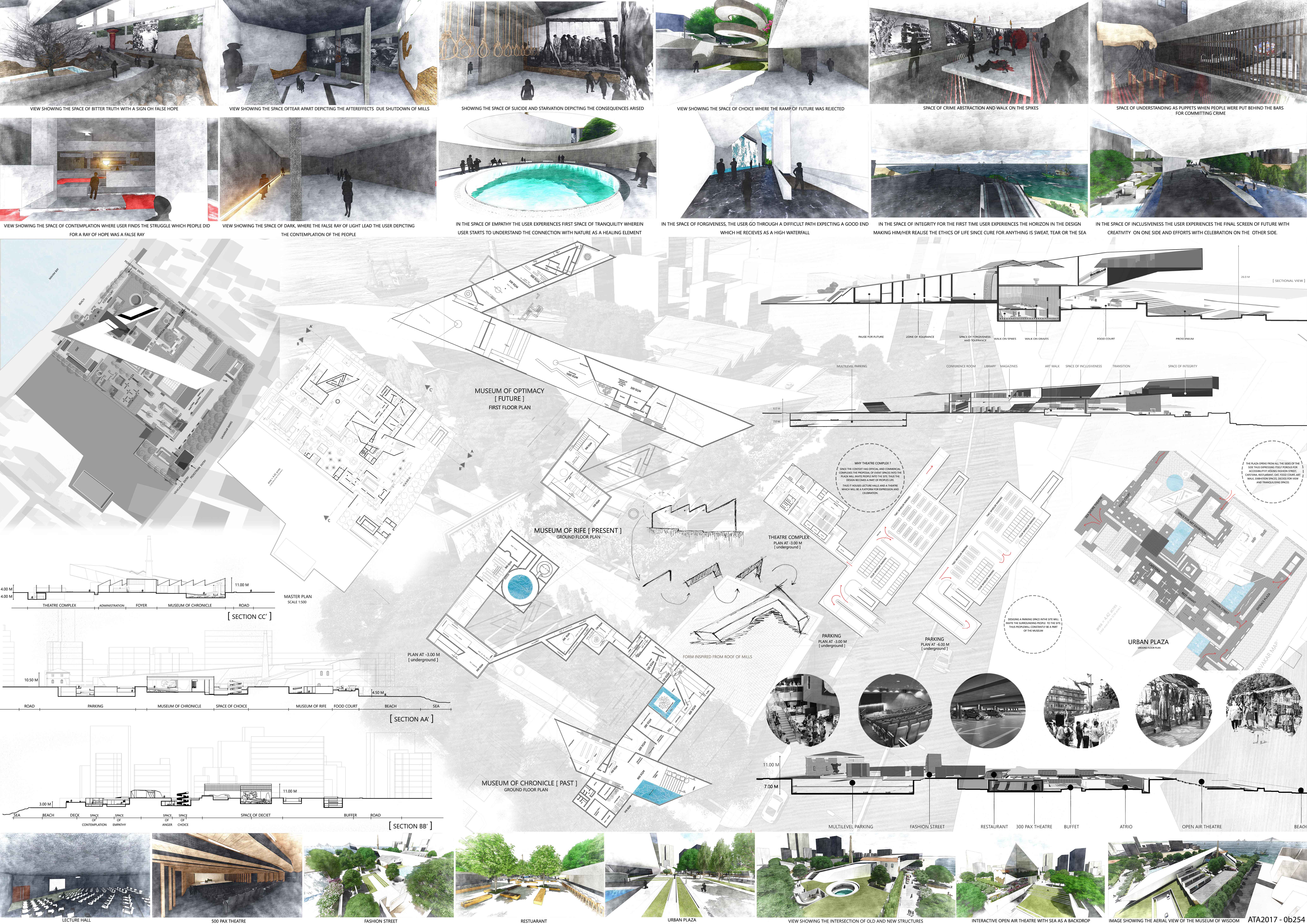