The city of Naples is one of the oldest towns in middle Italy. Through the Romans, Borbonicans, the French, the Spanish and to world wars the city is characterized in different architectural, historical layers. But the main influence since the emerge of Naples on the built development is the natural location. The landscape near the Vesuv and the Golf of Naples has a huge topography, which created and still creates the borders and opportunity of the city growth.

Starting with a research, my focus was on the western part of the city of Naples, where the first settlement was located as well as where topographically the largest differences occur: the area from Castell dell‘Ovo up to Castell Sant Elmo. With a catalog of the different typologies and their characteristics of the urban and architectural area three levels of the city were defined: the tufa stone and the associated caves of Naples, the intersection between the rock and the surface as staircases, and the associated development of the city as built architecture. As the location of the first settlement in the area of the golf of Naples in Greek times the Mount Echia has great historical significance for the city. For a long time the site was located directly on the water. From here a panoramic view is possible, and it is nowadays a central point for its surrounded district called Santa Lucia. Unfortunately, it is a wasteland and the rough stone lies like a foreign figure in the surrounding area. The strong topography, which is almost ninety degrees divides the district into two levels (the upper, and lower part) and makes planning difficult. My design is intended to highlight this site with a harmony of landscape, history, architecture and public life in a meaningful way. It has to be seen as an exemplary worked out area of a urban experience from the beginning of the city to the highest point. The design works as the starting point of this topographical promenade.

The accessibility and urban landscaping of the natural rough tuffstone was one of the central tasks of the project. The elements of the city of Naples - rock, intersection and architecture as well as the history and public - should come together in a concrete design and benefit from each other. On one hand, the already existing „Borboncen tunnels“ under the mountain should be made accessible for the public and connect the different levels. On the other, the excavations of the historical Villa Lucius Lucullus from the Romans are to be captured and staged, and the old Palazzo di Carafa (now functioning as the State Archives) is to be revitalized. The historical and future importance that this site should have is formed by a monumental staircase with large arches as entrances to the steps of the city. At the same time, it is not only access but can be seen as a public space and experience. Various terraced platforms offer views and stage the city and the landscape of Naples. On top of the hill, the Old State Archive is complemented by an annex with an arched structure that encloses the excavations in a courtyard and functions as a museum of Naples‘ urban history. The museum tour has entrances and exits and includes views of the cityscape in the experience. The caves under Monte Echia can be accessed through paths from the staircase.  The design thus comes to the beginning of my research and shows how important the harmony of landscape, history, architecture and public life is 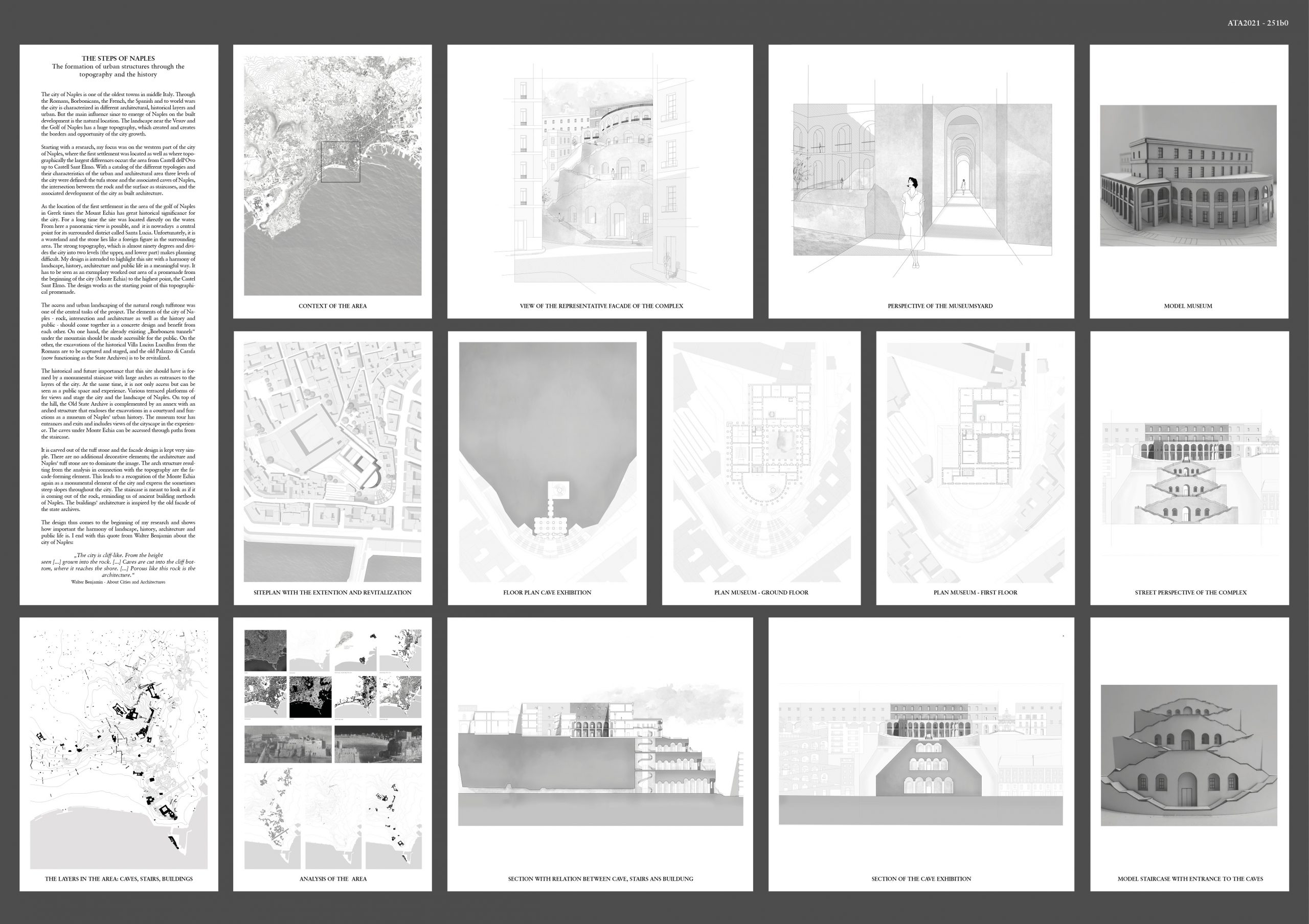