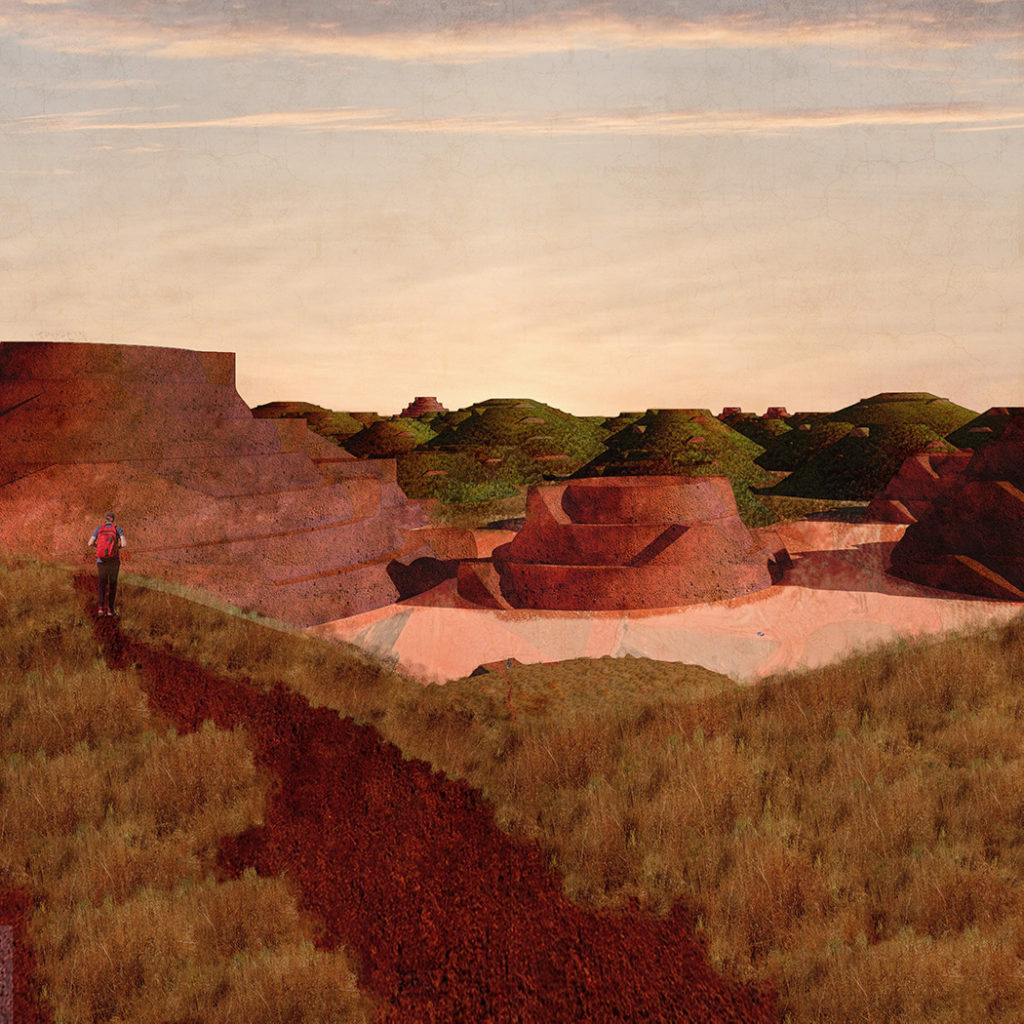 I contend that architecture is a waypoint for the circulation of matter and energy in a larger territory. A single material implies a vast global network, fraught with toxic ecologies and economic disparities. Aluminum, a common architectural material, presents a vast, unsettling global network. While it is known for its lightness and strength, the final products only account for small percentage the territory of aluminum. The mining of bauxite, the refining of alumina, and the waste of millions of tons of scrap aluminum has massive environmental consequences. But why does this matter to us? More and more, the enormity and complexity of the territories of architecture lead designers to pretend these pathways of intake are not their problem. 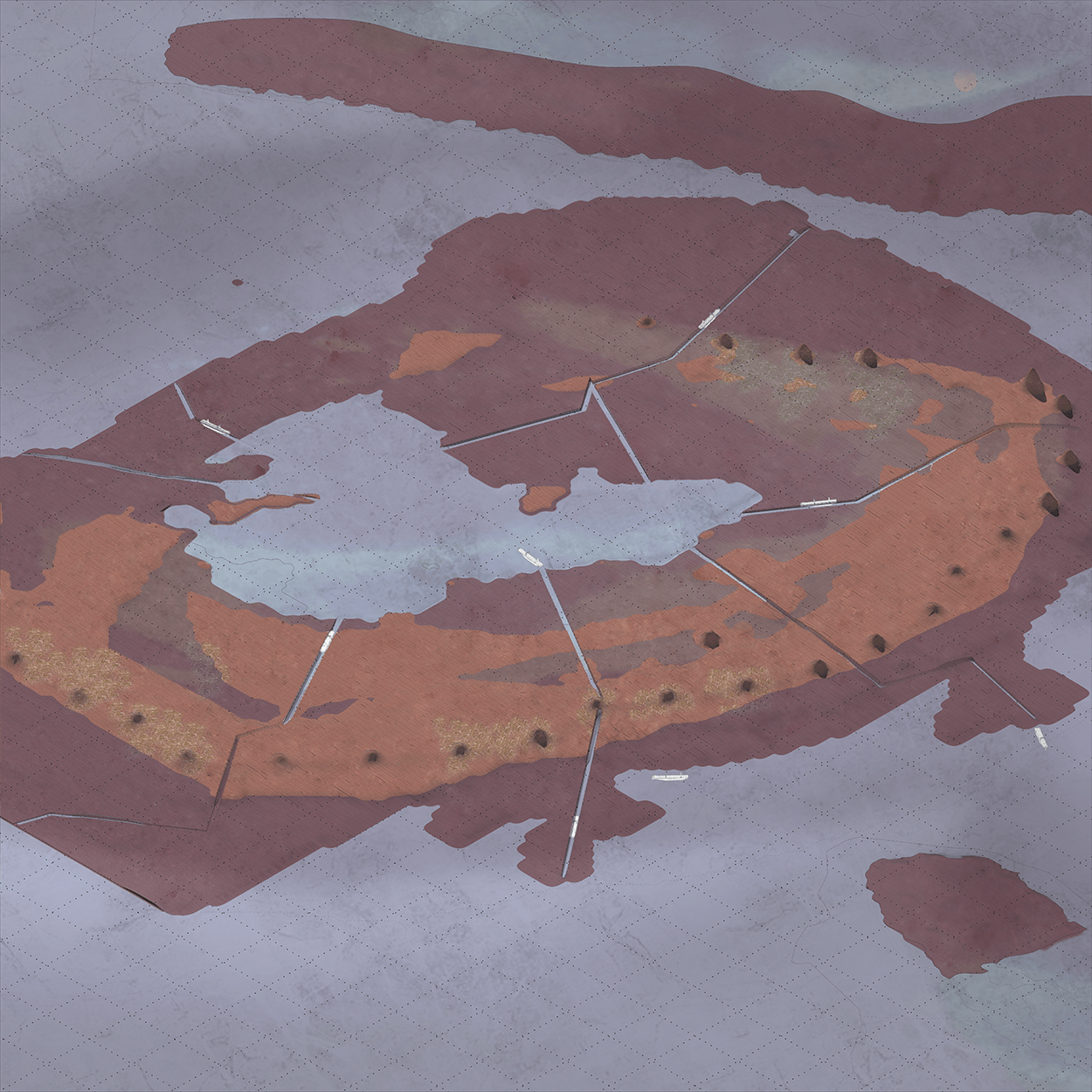 In response to this dilemma, this project seeks to rectify the damages, close the gaps, and reveal the hidden realities of this material. To do this, the scales of intervention must match the enormous scales of the environmental destruction that are taking place. My interventions are represented under construction, since they will grow overtime as an indexical measure of the build-up of waste in the global system. I have chosen three sites throughout the territory of aluminum in which to intervene, and two waste materials to repurpose as didactic devices. The refining of bauxite creates massive pools of caustic red mud, ruining soil and threatening groundwater supplies. In the first site, concrete modules are deployed with the purpose of recovering the Great Barrier Reef and encapsulating bauxite tailings. Due to recent bleaching events in 2016 and 2017, over half of the reef has died out. While the only surefire way to save the reef is to reduce global emissions, one of the ways to help it recover faster is with concrete artificial reefs, seeded with genetically modified bleach-resistant coral. Drones place the individual modules precisely, so the total mass of pieces can create a designed boundary, or a distinctly unnatural organization of a new natural space. 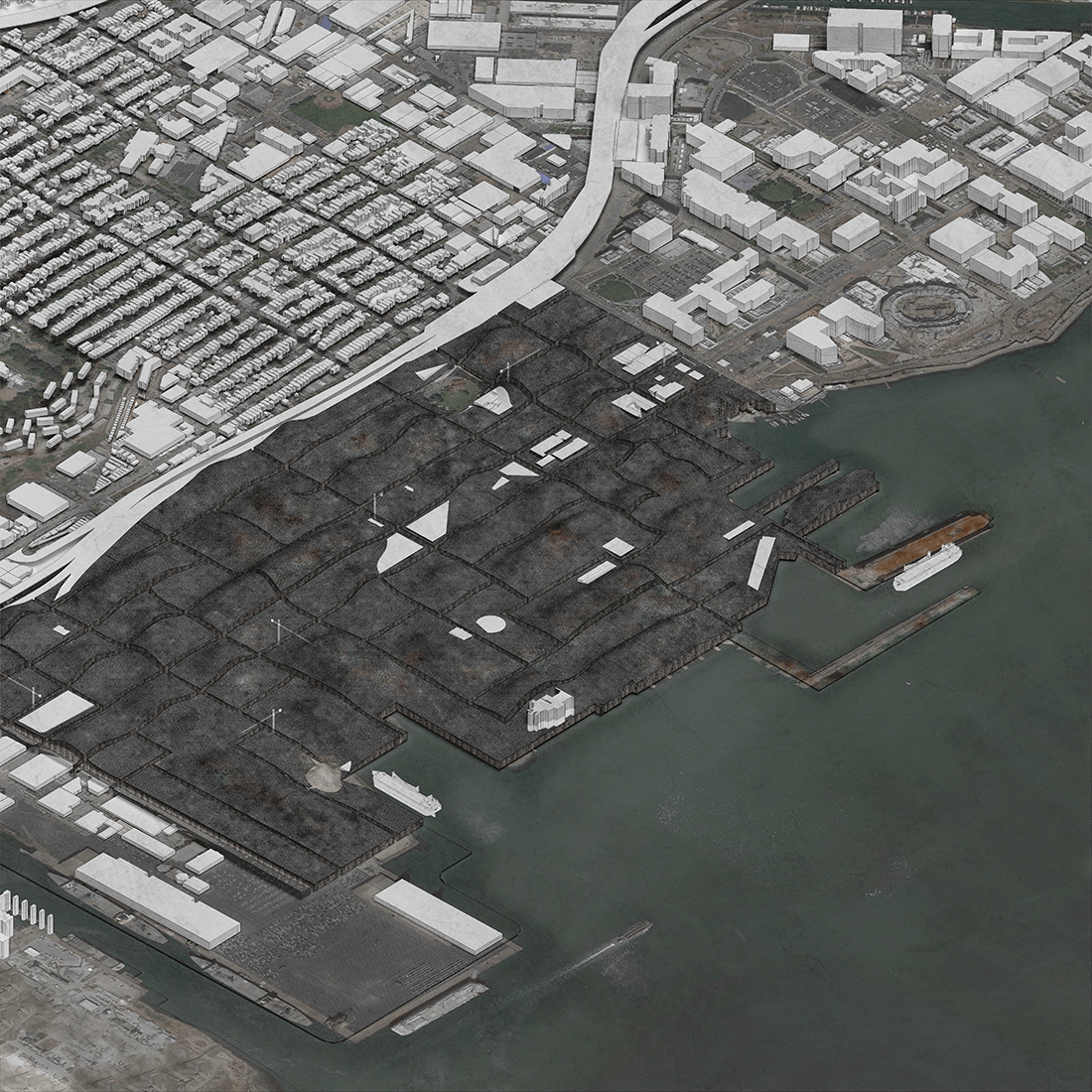 Millions of tons of recycled scrap aluminum are currently being dumped into landfills as a result of China’s ban on the import of recyclables. In response, the second site, in the port districts of San Francisco, there is one of the many, constantly expanding sites for a national reserve for scrap aluminum. The end goal of this build up would be a wake-up call to improve the industrial capacity of aluminum recycling in the US, but if the current political climate is any indication, a massive occupation of land may occur. The surface mining of bauxite, or aluminum ore, stretches over dozens of miles in a single site, destroying the tropical rainforests where significant numbers of mines operate. In the third site, the scarred landscape of the Weipa bauxite mine is remediated with dried, neutralized bauxite tailings and compost. The piling of the bauxite tails acts to store it in vast quantities as well as use it in an important soil horizon. The design does not act as a means of preservation or conservation, but rather a distinctly artificial sculpting of the landscape. These interventions may seem excessive, but they only reflect a small portion of the waste, in the lifecycle of a single material. If we are to concede that this network and these materials are necessary to sustain our quality of life (as many already have), then it is the role of designers and architects in the Anthropocene to make that excess legible. 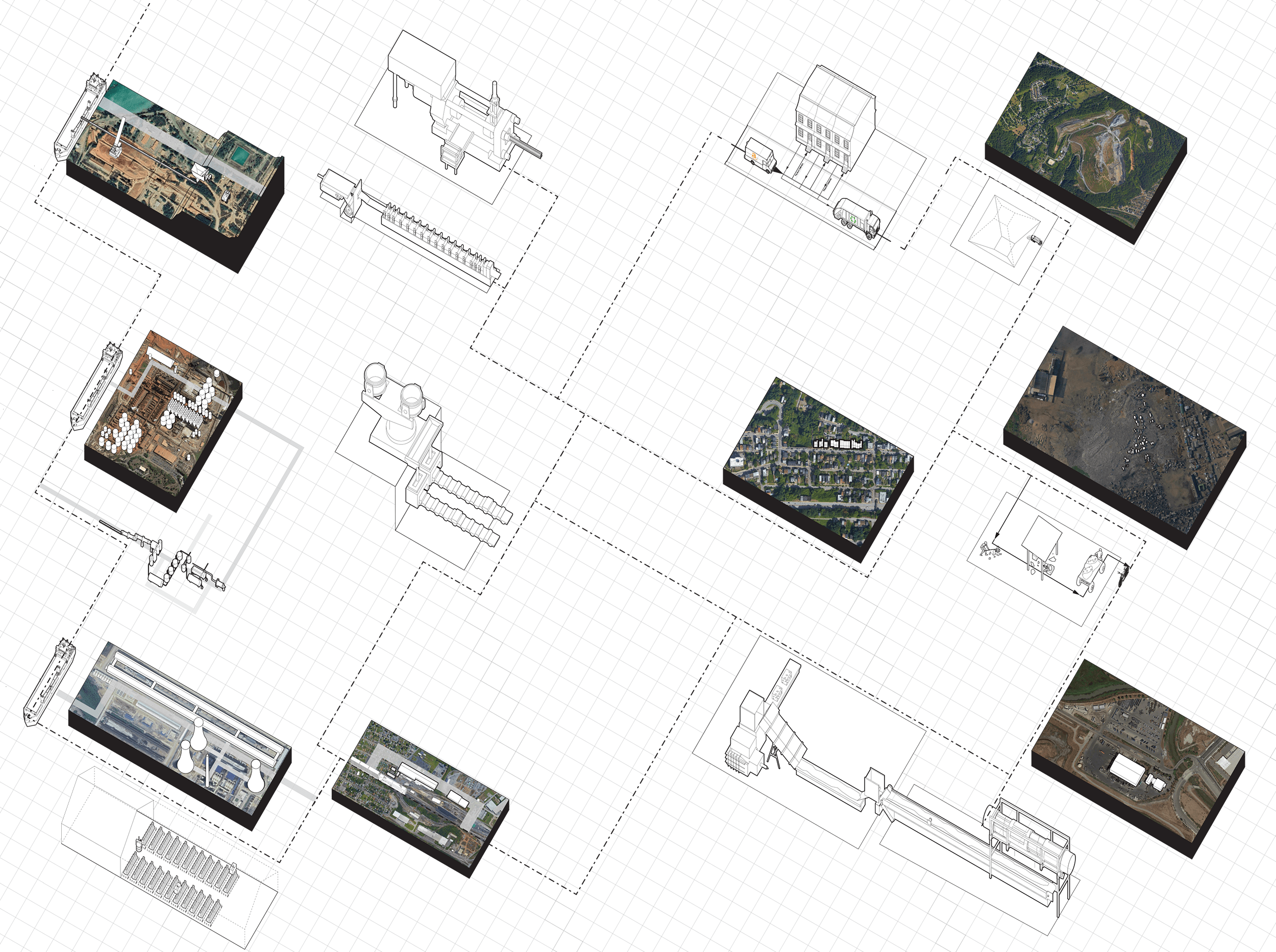 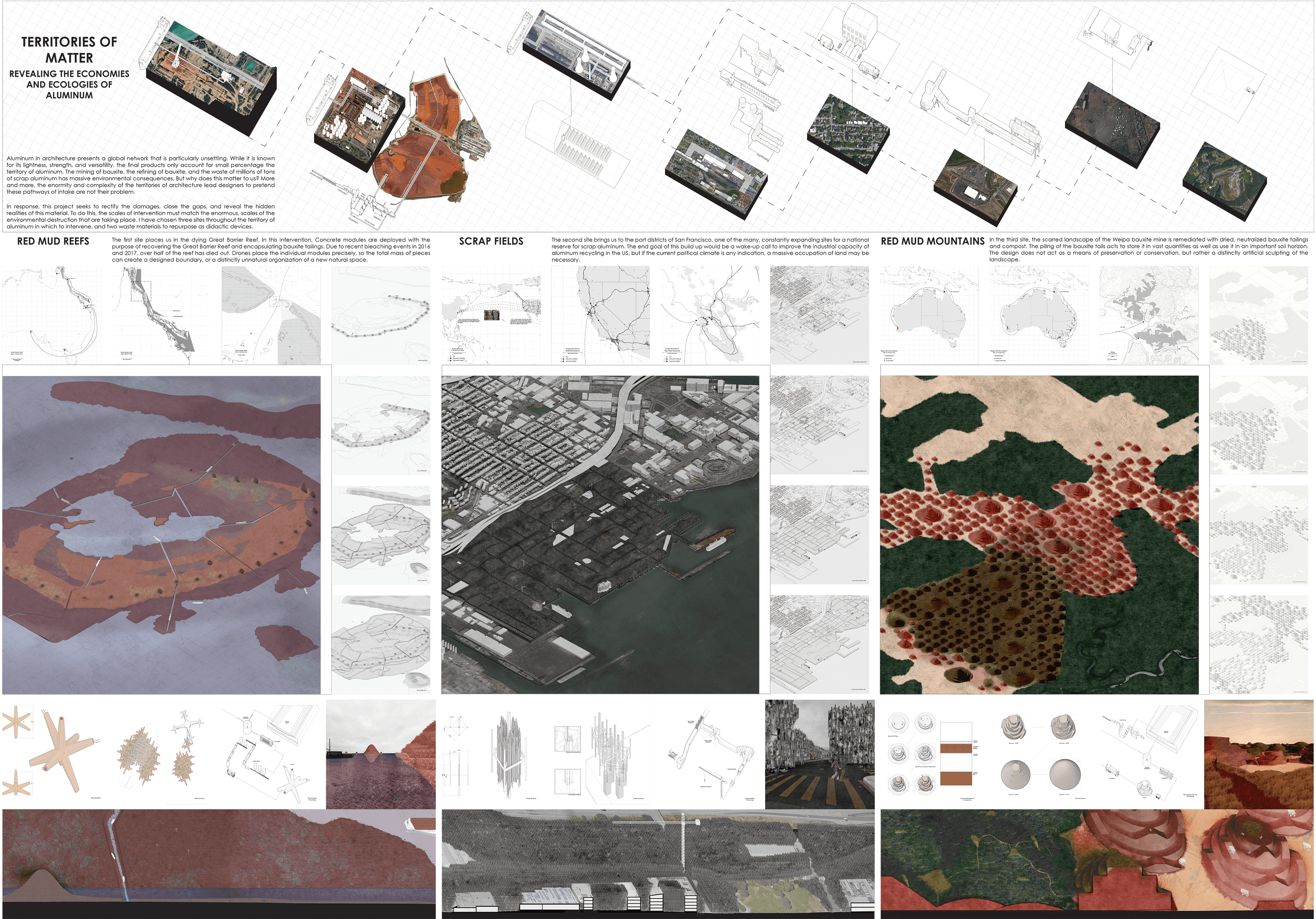 I am a recent graduate and architect.
FOLLOW
MESSAGE
LOGIN TO LIKE
[pro_ad_display_adzone id='2269' ajax_load='1' info_text='Advertisement' info_text_position='' font_color='#' font_size='11']