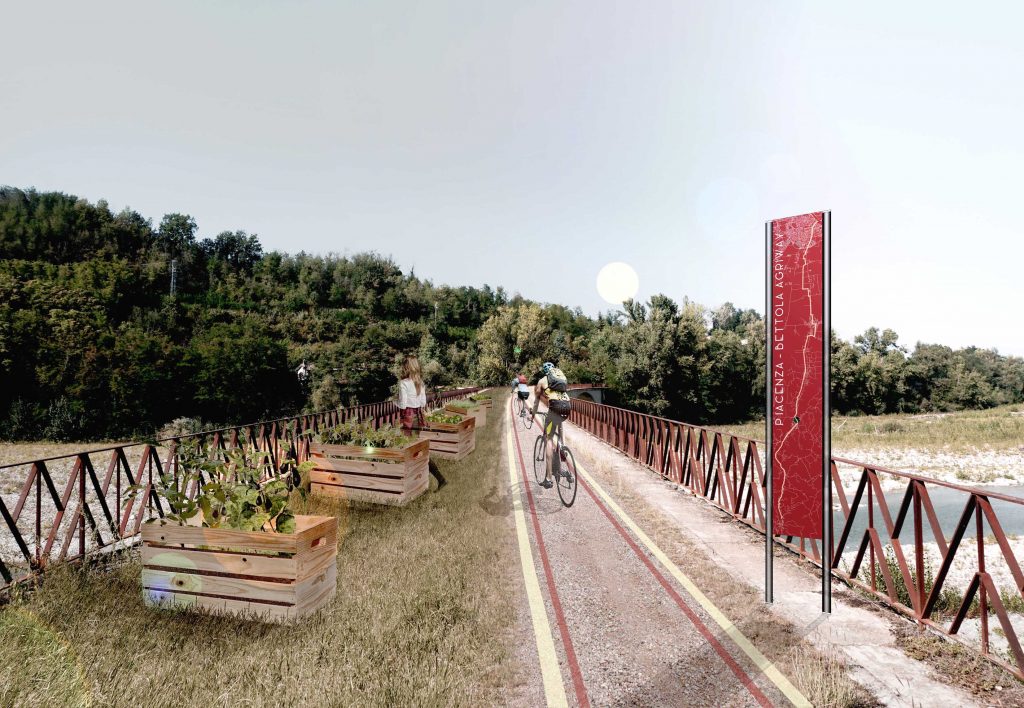 Piacenza – Bettola railway is a former railway that crossed the city of Piacenza and the Valnure area to reach the town of Bettola. It worked from 1933 to 1967. The area now is still crossed by the Provincial road but the ride became longer and with setbacks, thus cutting off the Val Nure towns from having a real connection with Piacenza.
The idea behind the project is to create a new sustainable mobility for the area through the use of bicycles, connecting cities with the help of their shared culture and memories of the past, and giving this mobility a new sense of purpose and an evolving future, reinventing the concept of “greenway” with the addition of green patches of urban agriculture. 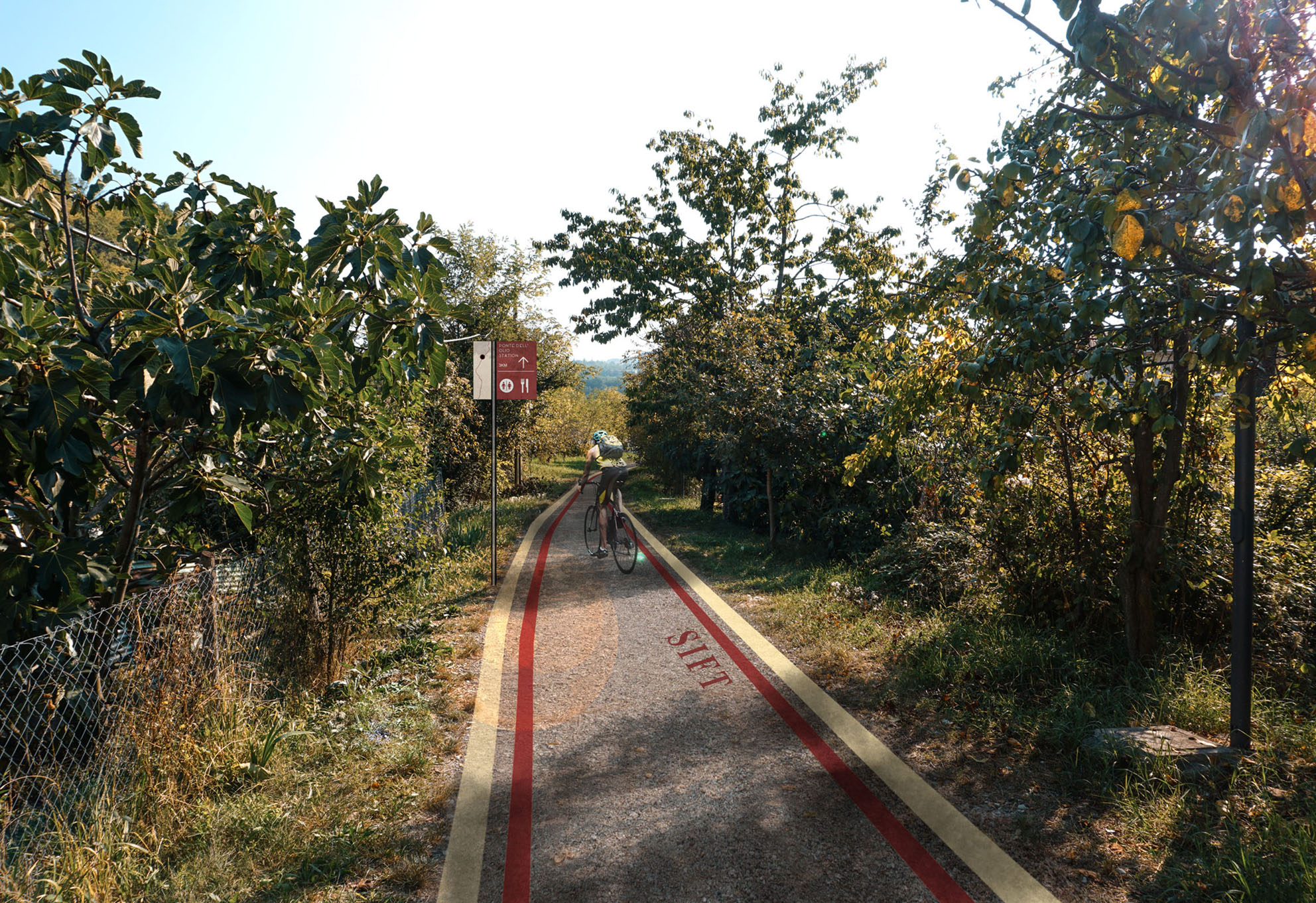 The new mobility system can’t replace the time efficiency of the former one, the goal is to use a vehicle that gives enough speed to cross the whole area but still gives time to explore it and learn about the Valnure heritage, the history of the railway and the landscape variety that is the peculiarity of this region. The preliminary analysis for the project start with an historical one, learning about the history of the former railway and the effects it had on people and on the landscape, followed by diachronic/synchronic maps of the area to show the changes in time, and a full railway path analysis with what is remaining of the railtracks and the type of trace is left: rails, type of trace, no trace. A SWOT analysis helped to put all of these informations together and to choose the main and secondary strategies, dividing the attention between 7 categories: urban areas, agroforest landscape, periurban landscape, infrastructures, abandoned railtracks, tangible and intangible heritage.

A project masterplan was made where the Agriway path is shown, with the different types of paths depending on the area that it would cross. To further the historical importance of the railway for the locals and tourists, the storytelling is done both by path signs, with historical pictures and texts of explanations, and by the Agriway itself, with recurring elements regarding the approach to the surroundings, the chosen colors and materials, to make the path feel like a unique experience despite the difference in landscape. The social agriculture element is developed in several periurban and urban areas in the city crossed by the Agriway, and the pattern is of a green corridor surrounded by green patches: the gardens have an expansion system, at first only 50% of the soil will be dedicated to agriculture, leaving 50% left to meadow. The more locals will use the gardens, the more expanded they will be, always leaving some areas for spontaneous growth. The products are grown in the gardens, then processed on site or in the old train stations, and then taken by Agriway to the organic market in Piacenza to be sold. The idea is to revive the area by making locals and tourists interact and maybe work and travel together on the Agriway, giving it a way of expanding through time and a source of income to maintain itself and creating interest. The cultural value would evolve giving new life to Valnure. 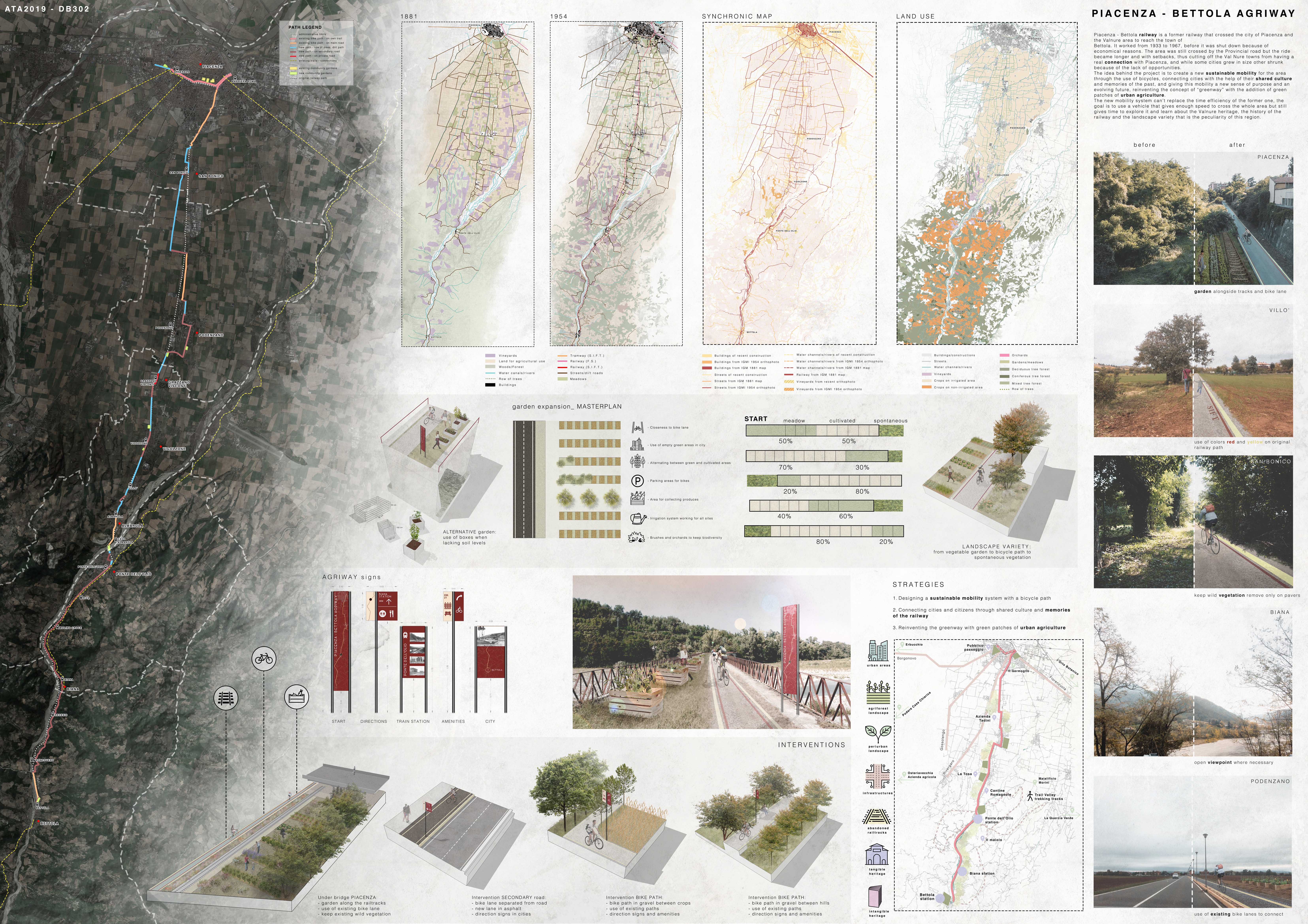 I am an architecture and landscape designer and i freshly graduated from Politecnico di Milano. I have a master degree in Sustainable Architecture and Landscape Design. I am very interested in new ways to design sustainable options both in natural and urban landscape, and i enjoy working in abandoned areas to be recovered. I have a passion for photography and art history.
FOLLOW
MESSAGE
LOGIN TO LIKE
[pro_ad_display_adzone id='2269' ajax_load='1' info_text='Advertisement' info_text_position='' font_color='#' font_size='11']

by NATHAMON KHANKHAYAN
1 63 0
CHARBAGH CITY: Towards a Sustainable Settlement Competitions 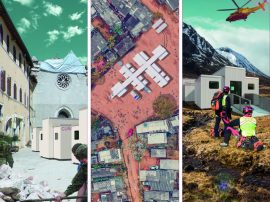