Modular complex on the Bely island 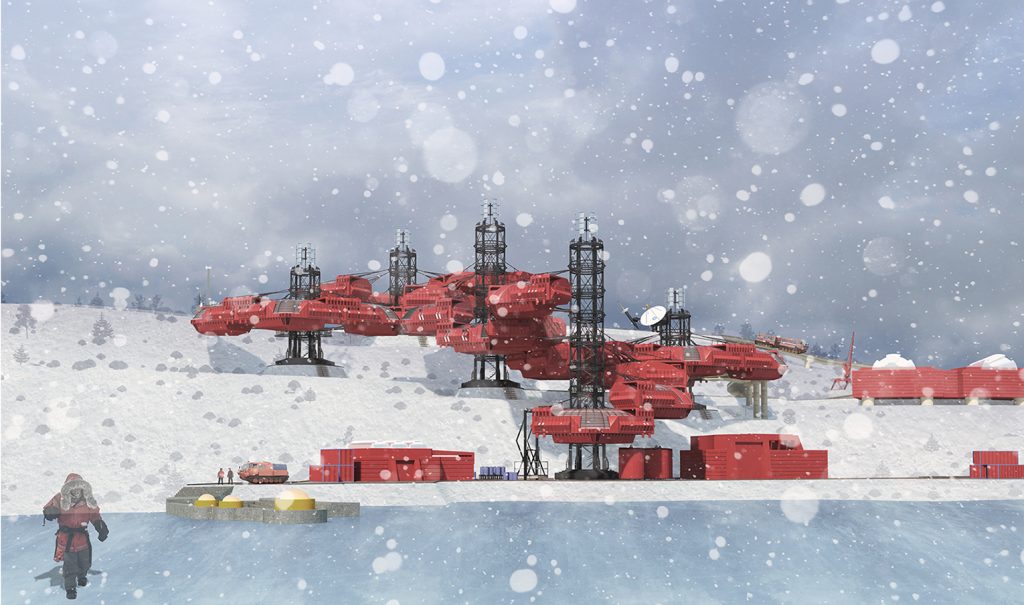 The modular station is designed to solve the key problems characteristic of the Russian North: the lack of modern infrastructure and significant damage to the Arctic ecosystem over the years of human presence in this part of the continent. The Bely Island (located in the north of the Yamal-Nenets District and separated from the Great Land by the Malygin Strait) is a collective image of the Russian North as a complex of these problems. Also the modular concept, possessing such characteristics as mobility, universality, quick build-up, allows to effectively solve the difficulties that stationary construction inevitably encounters. 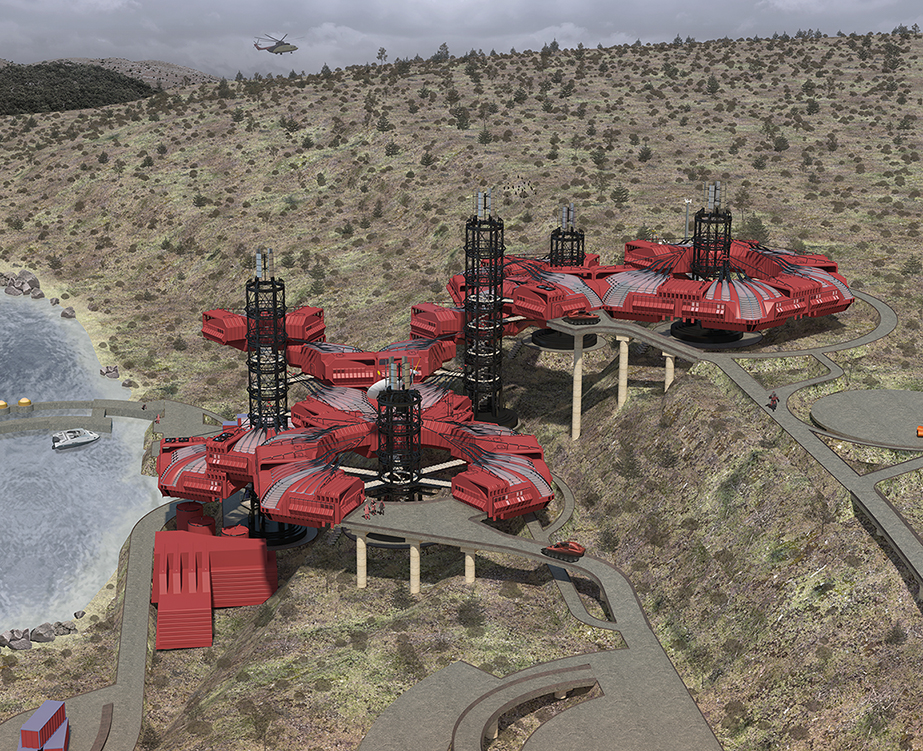 The modular concept is a form-building approach, an expressive architectural and design approach. The complex has a corresponding tectonics - you can perceive both the form of a separate module and the set of modules as a whole. A number of natural, organic associations are supported (as postulated by the founders of modular philosophy) - supporting structures like "trunks" and modules like "branches" or "fruits" of tree. The basic idea of ​​forming a complex is the concept of transformation of a modular architecture from 2D-plane to 3D-space. In other words, the modules are blocked not only horizontally, but also vertically. This approach generates the following positive effects. 1. The area of ​​development of the northern lands is expanding - not only in flat areas, but also in a pronounced relief. 2. The process of functioning and operation of the complex in the conditions of severe climate is simplified - for example, access from one location to another is carried out within the complex. 3. The need to move daily between modules in a vertical space is considered as physical activity and a positive factor in the fight against the negative impact of closed space. 4. Aesthetic aspect of such solution - one can avoid the monotony inherent in container architecture. The achievement of the autonomy of the complex is based on the idea of using renewable energy. As follows from the given climatic data, the advantage on the Bely Island should be given to wind energy.

The necessity of module suspension allows solving next important problems. 1. There is no need to build a foundation for each module, which simplifies operations such as changing the location of the module, installation and dismantling. 2. The contact of the heated surface of the complex with the ground is excluded, neutralizing the phenomena of thawing of permafrost, freezing of premises, snow drifts. 3. The vegetation cover is maintained at the construction site. 4. The safety from penetration into the station of polar predators is raised to the maximum. Components of the modules and the bearing system are delivered (mainly by water transport) on the island with the already prepared transport communications. Components of the bearing core are delivered to the construction site, on which structural rods are formed. Components of the modules are delivered to the assembly site, where they are connected to a solid cells-modules by assembly crane. The assembled modules (by air) are delivered to the supporting rods and mounted on them. Module geometry allows for three options for docking modules: face-to-face docking (eg residential galleries); vertical docking - applied in the case of a pronounced relief difference; longitudinal docking - modules are joined by longitudinal sides (laboratory-research hall). The scientific and residential complex provides for the implementation of scenarios such as research, monitoring, environmental expeditions, volunteer activities, tourism. 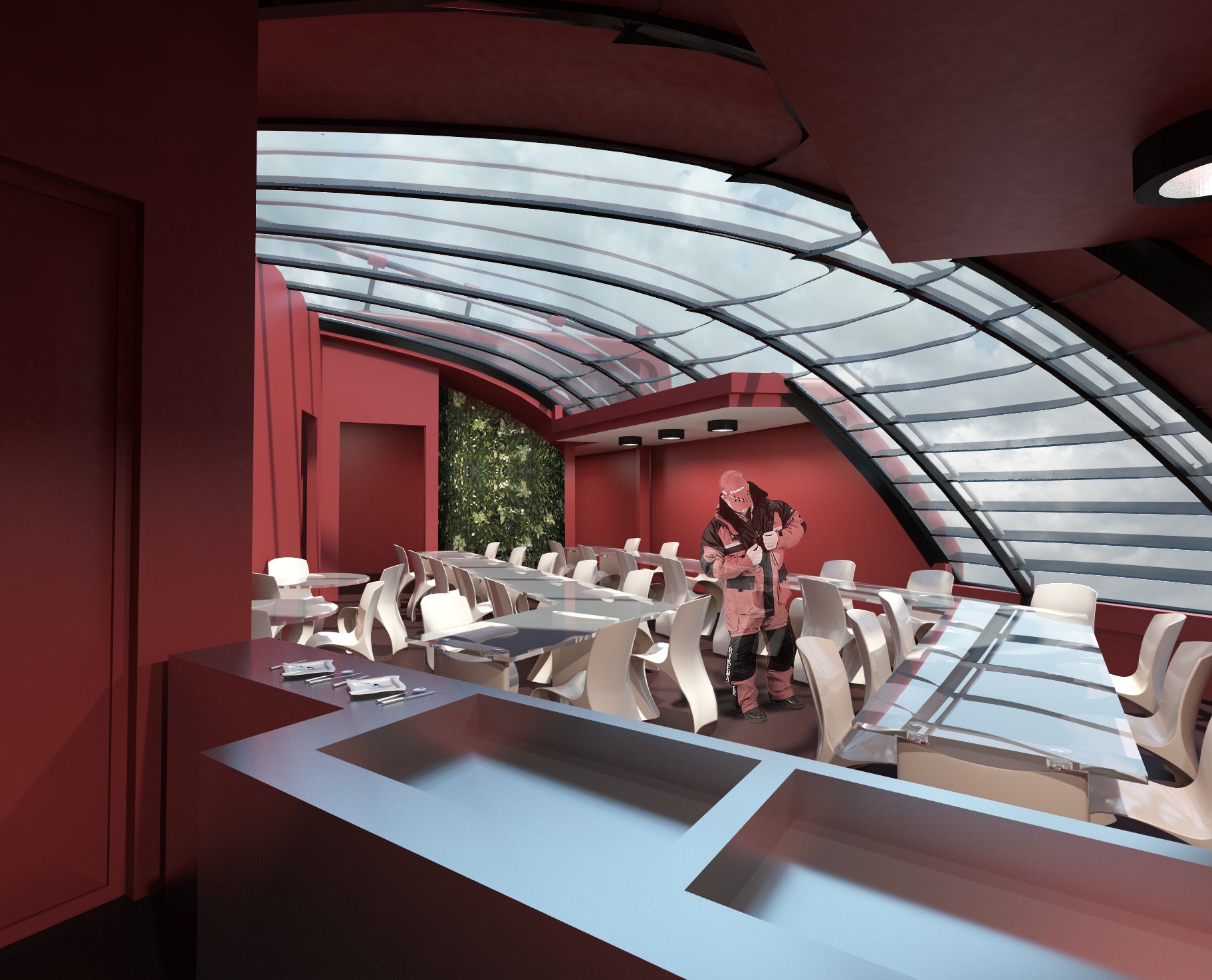 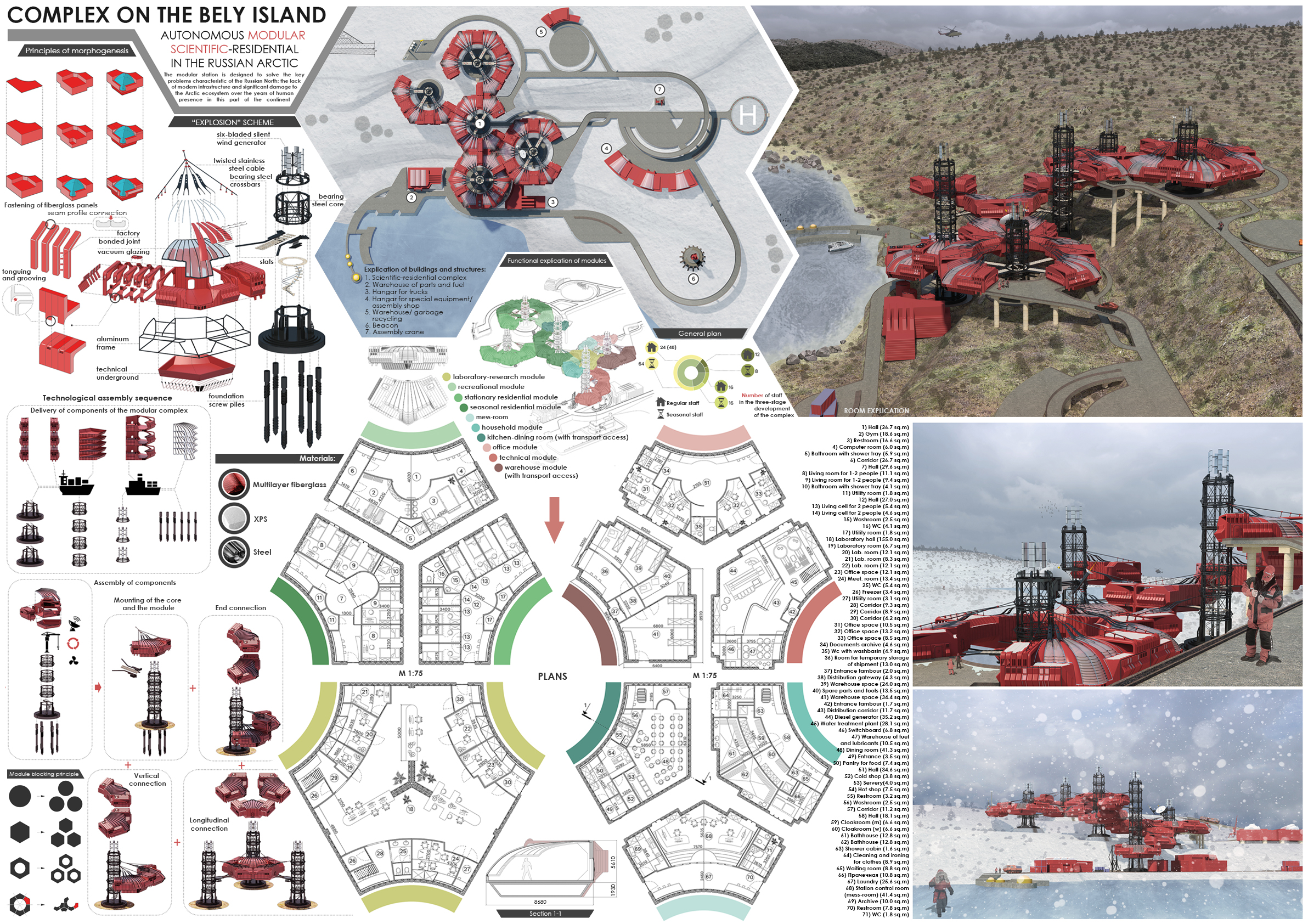