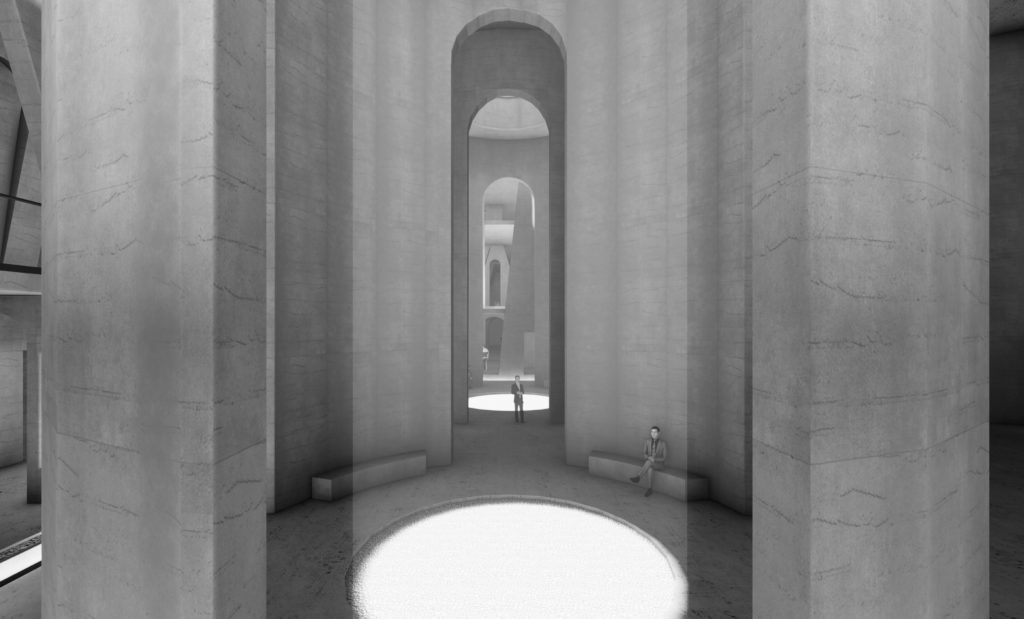 Languages are the most powerful instruments of preserving and developing our tangible and intangible heritage. To speak in mother tongue is a primary right for every citizen of an independent nation. The Shaheed Minar (Language Martyr Monument) embodies the memories of a glorious and courageous event, that asserted the primary right of speaking in one’s native tongue. It provides a place to remember and mourn the martyrs who sacrificed their lives on 21st February, 1952, and it personifies the honor and love of millions of people. the project aims to preserve the history of the Language Movement respecting the historical site. It is not only designing a museum but also connecting the places where the agitation was conceived and matured. 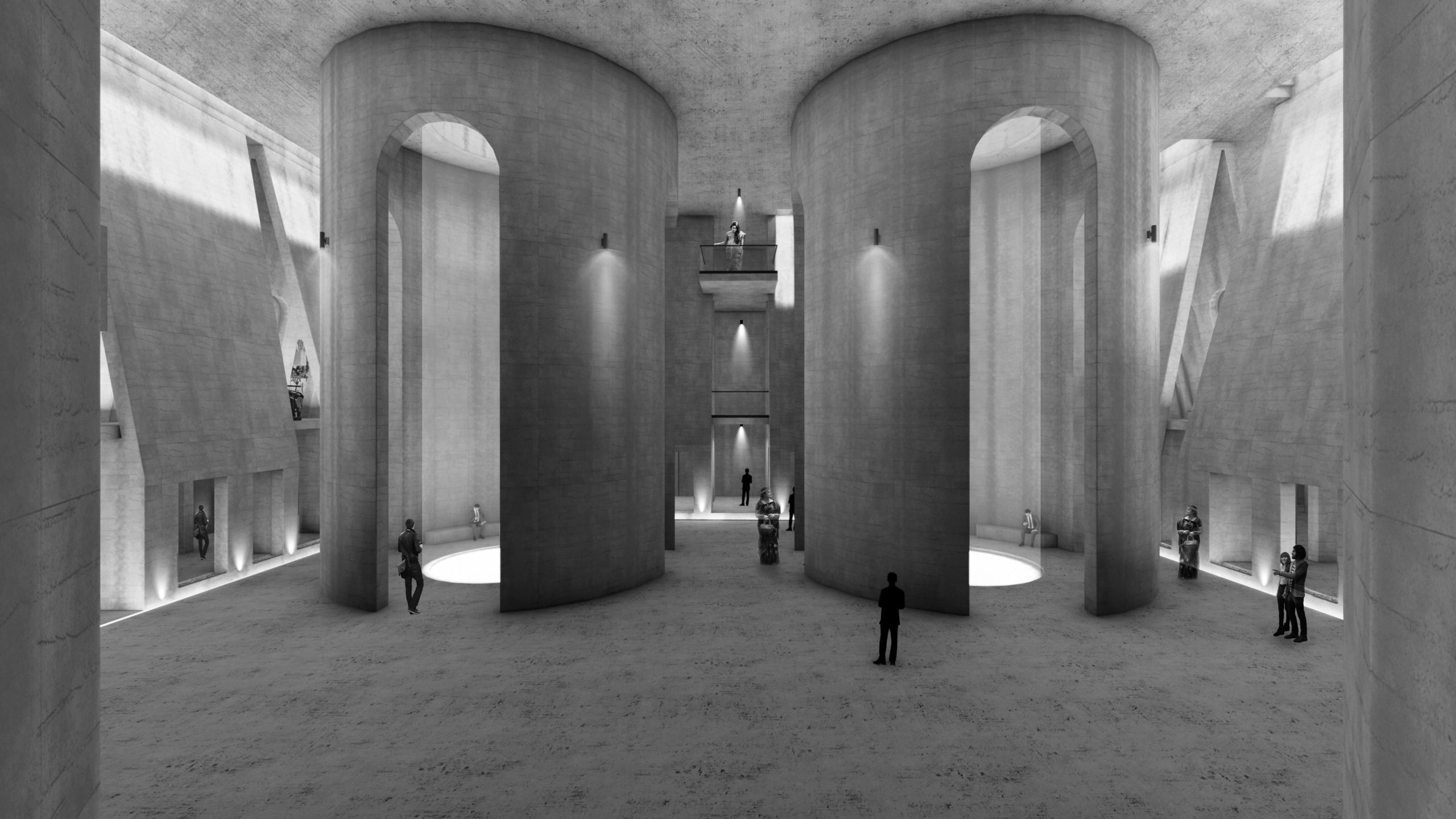 The architecture of the museum intends to resonate the struggle and leave a message for the future generation, but then again at the same time the historical significance of the site and Shaheed Minar can not be underwhelmed by the boldness of the newly designed museum. Also a large amount of gathering occurs on that vicinity during Pravat ferry and multiple occasions throughout the year, & all these activities demand a space of their own. So the space has been provided over the museum- while the museum itself sank underground, providing an undisturbed landscape for the monument. In order to establish the shaheed miner as a destination point –the intension to create a pathway through the site which would be major pedestrian corridor –leading people from the intersection of shaheed miner road and the secretariat road to the shaheed miner-this pedestrian is designed to dedicated to the provat feri(the morning procession) of 21st February when people from allover the country could march to the shaheed miner,barefooted with flowers in hand to pay tribute to language martyrs- the plaza will act as a celebration of urban life holding other public cultural events throughout the rest of the year. Library:- The library is itself informal in nature. Various type of reading spaces are provided, people can read with the presence of indirect sun light. Some parts of the library are visually connected with the Galleries creating ‘in between spaces’ –Galleries are visible from these parts which can create subtle dialogue with the visitors. Spaces are connected from different layers which leads to perpetual dimension of purpose to visit rest of the museum. gallery:- The gallery part are divided with two part- -historical walk thought -language movement. Historical walk thought- history of Bengal,pala empire,sena dynestry, colonial & muslim sultanate. Language movement- chronology of language movement, hall of remembrance,court of inspiration & path of hope. In gallery I try to look for presence of time, then there arises for serenity and silence and opportunity for sharing extreme weight and silence-the silence of light- silence of spaces. the permanent gallery placed at underground, the journey started by a narrow stairway with the presence of sun light. The visitor enters the museum lobby & mystical volume of space ,garnered columns of light light intends a surprise. Then it walks into the gallery where the visitors feel lost of spaces where narrow pathway offer you to walk into the volumes which absorbs the visitor, where time is lost. where we question existence of place, time, and values. Where we evaluate past and grateful for what we have and contemplation on the events of the movements that preceded are enhanced. Path of hope:- It’s a ramp which guides the visitors into the exit. Curiosity draws to walk and reach the top. A journey that offer a movement to pause and ponder to wish to redeem. 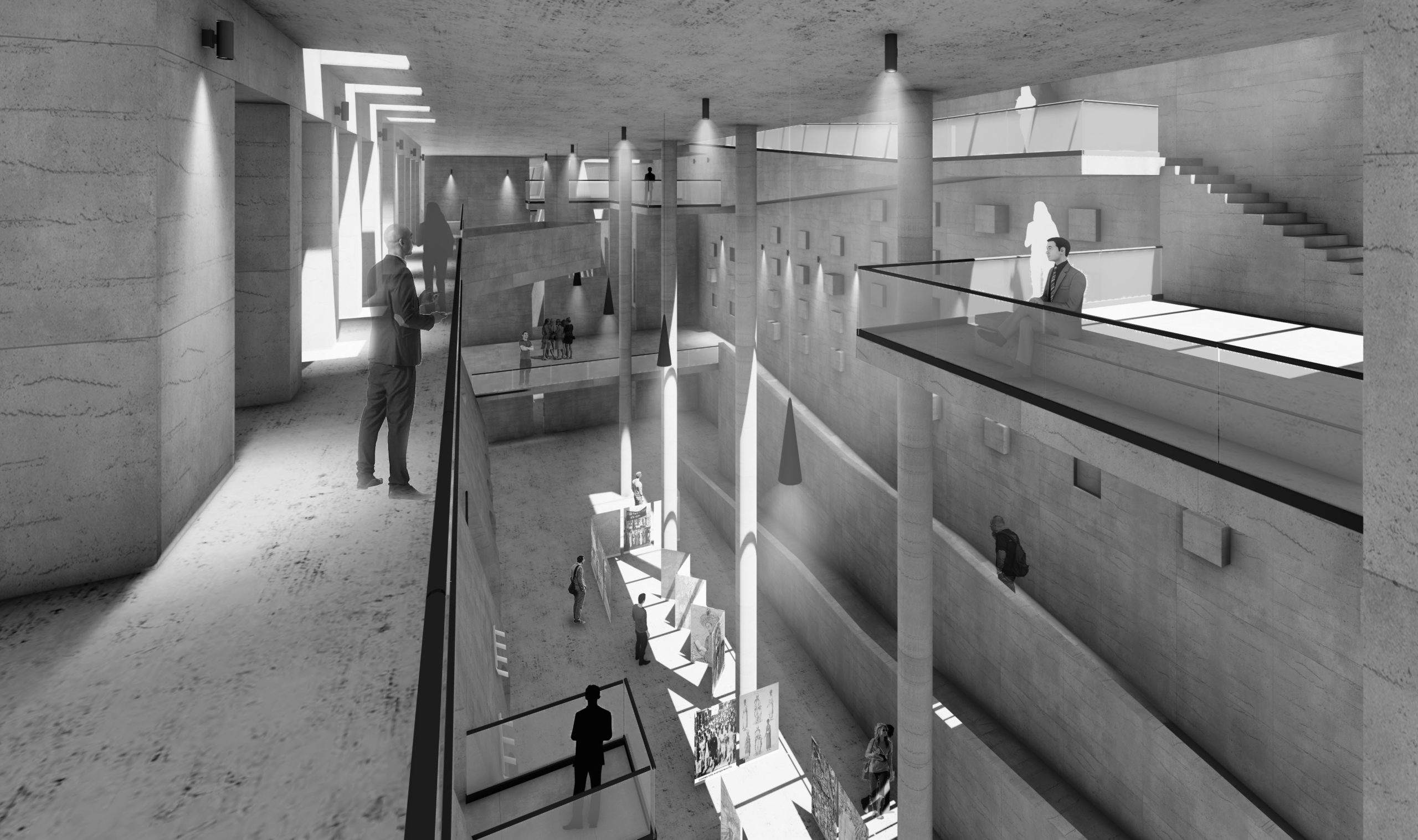 Form & space:- the form is robust, rigid and brutal which is an allegory to the harshness faced and the resistance that reject oppression. Pure shapes represents purity of intention and the manifestation of space are inspired from the Shaheed Miner first built. Built with tears, sweat and perseverance. Modulation of spaces vary from tight corridors to overwhelming lighted chambers, which represent the modulating struggle though out time. Material:- using red brick in plaza is a continuation of shaheed miner plaza & brick is our local material-which offer every kind people to walk more comfortably. in interior space pigmented red concrete used in the whole building – as a part of shaheed miner also create an illusion in interior space. Red here is not only used as a material or color but also as an emotion.an emotion that is very cold, rooted in the DNA for this very nation. Red represents hope , sacrifice, diligence, sorrow and joy. 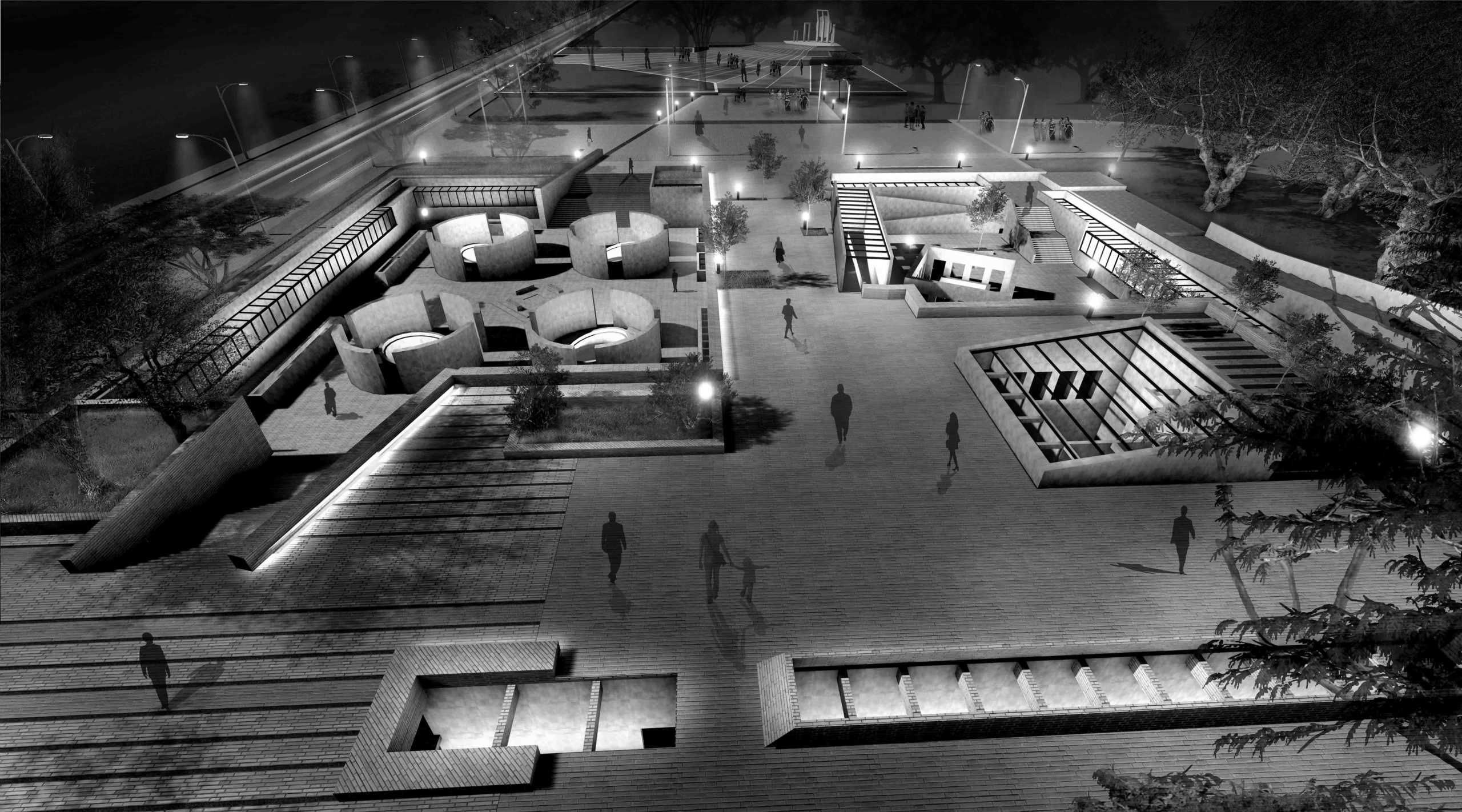 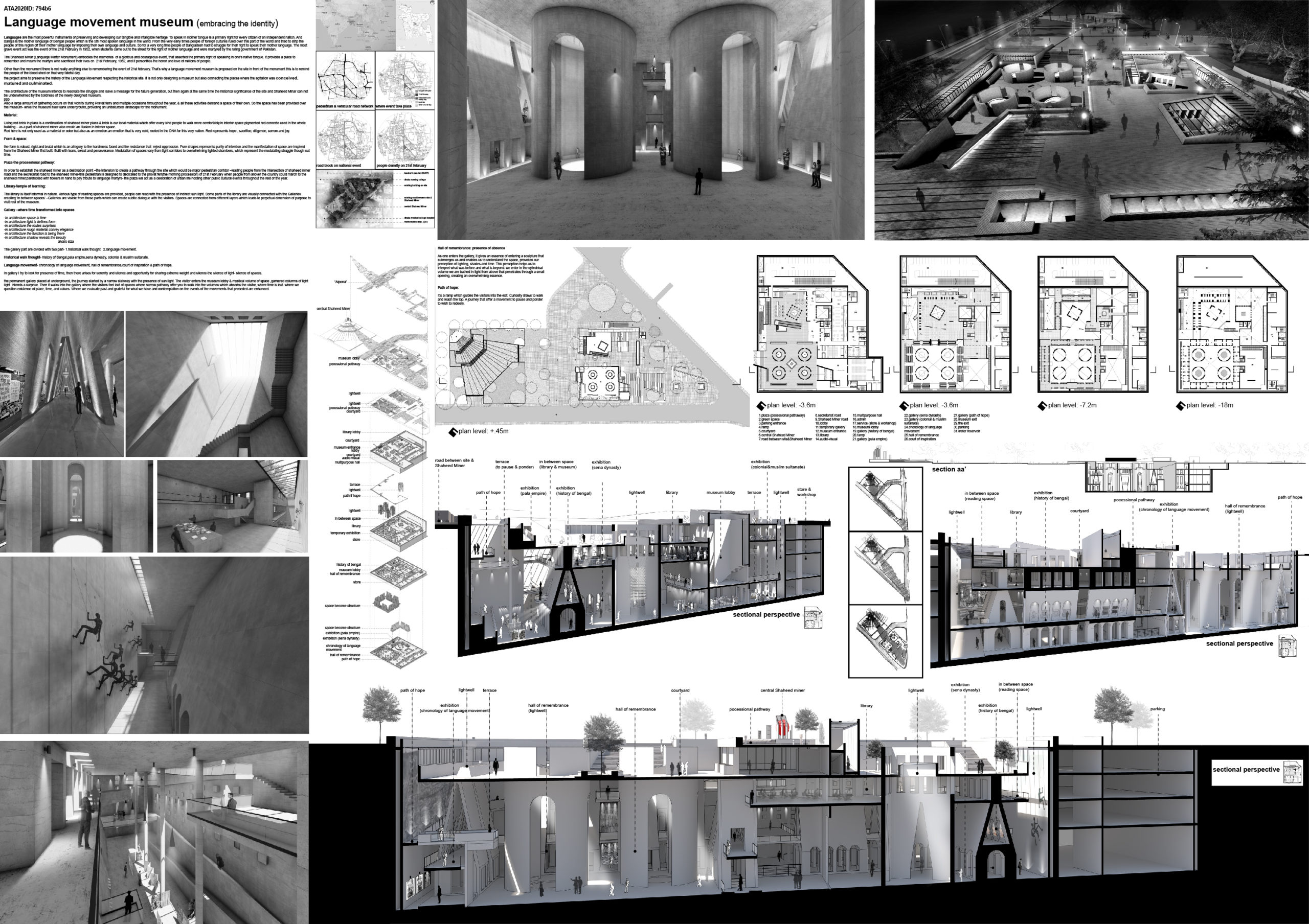 I am an Architect from Bangladesh. I studied at Ahsanullah university of science and technology, to me architecture is such a thing that can direct the way people live, i would like my architecture to inspire people to use their own resources, to move into the future.
FOLLOW
MESSAGE
LOGIN TO LIKE
[pro_ad_display_adzone id='2269' ajax_load='1' info_text='Advertisement' info_text_position='' font_color='#' font_size='11']