Islamic Tirthas – a river pilgrimage in the cradle of Islam in Cape Town, South Africa

This dissertation attempts to explore the boundaries of architecture: its relationship with natural and cultural landscapes.
The investigation explores an identified ‘River precinct’ from Zandvliet Waste water treatment plant along the Eerste,Kuils River through an agricultural community towards an important religious site. This site is a well-known Islamic burial site or kramat of Sheikh Yusuf Al-Makassari as well as
being part of a claimed Islamic Heritage site known as the ‘commonage’. The site was historically established along the Eerste River by Sheikh Yusuf as a farming community which became a rallying point for slaves and other exiles, eventually becoming to what was known as one of the first Muslim
communities in South Africa. 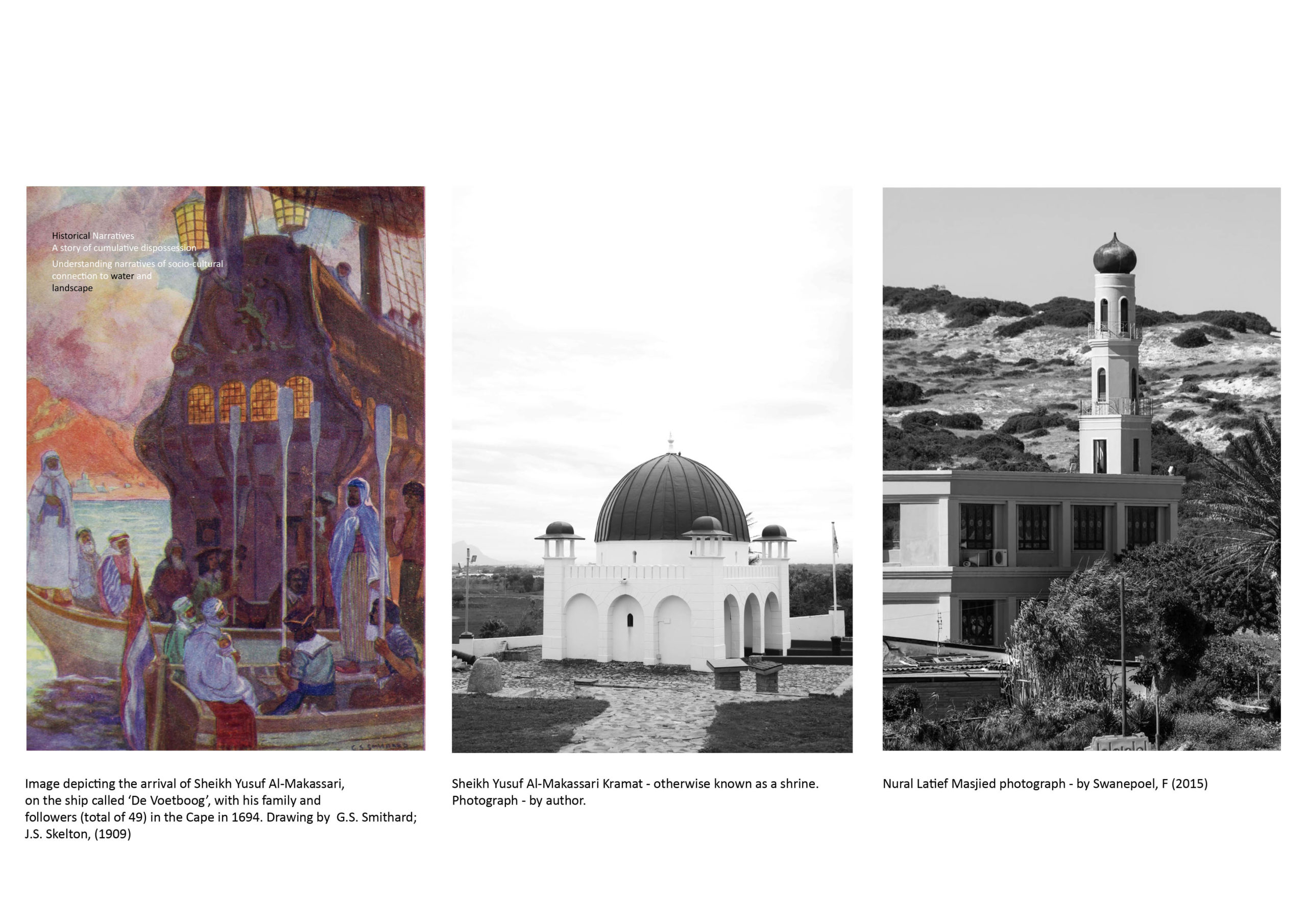 The site is under threat due to a number of aspects that have had detrimental impact to the claimed 'heritage site' such as water shortages, flooding, pollution from the treatment plant, and a receding indigenous ecology due to open cast sand mines and encroachment of other industrial developments. This dissertation re-imagines a new heritage pilgrimage route along the Eerste-Kuil River which offers a renewed significance to the heritage site known as the ‘Cradle of Islam’ in the Cape. The design project further proposes a series of water infrastructures that sanctify the site in various ways along the pilgrimage route which re-define post-industrial infrastructure as 21st century resilient, ecological and socio-cultural network infrastructures. 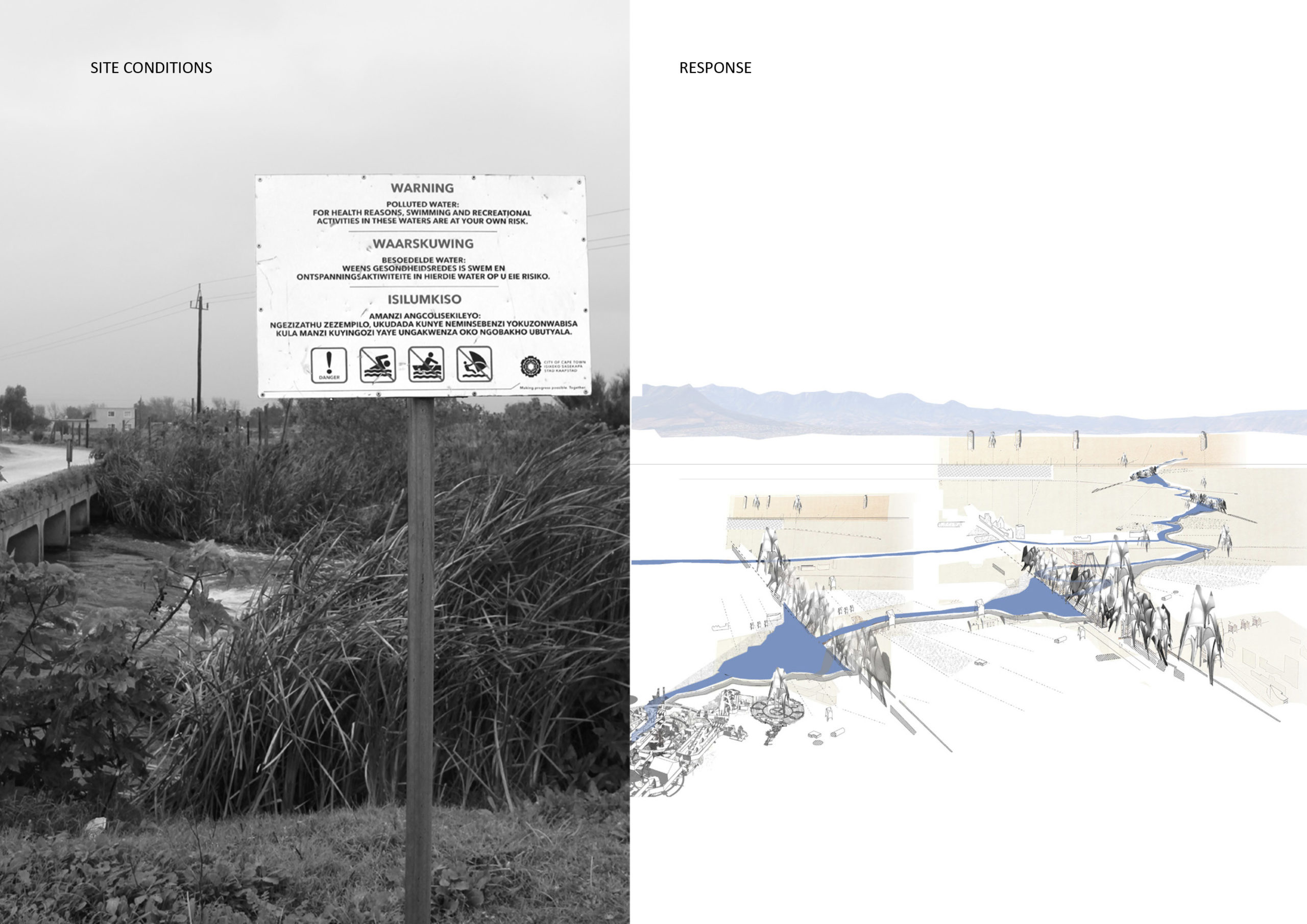 The infrastructures offer themselves as pausing moments along the route which formally act as eidetic signifiers within the landscape crystalizing the significance of the site. These infrastructures visually re-frame a pilgrim’s view of the landscape as significant vistas. The infrastructures take formal inspiration from Islamic geometry (metaphysical) and other functional (physical) industrial geometrical devices. The infrastructures are functionally engaged with terrestrial sphere of reality - designed as a hybrid series of check dams, bridges that provide services such as water storage, water distribution systems (luivoors), low technology purification and preventative flooding engineering feats to the historic agricultural community. The infrastructures also engage with the celestial sphere of reality, designed like a pavilion allowing public and pilgrims to have a meaningful experience of space and human body/spirit which were meditative, reflective, healing, calming or even transcendental and transformative spaces. This provides the potential to transform everyday mundane activities into more frequent encounters of the extra-ordinary and wonder, thus, humbling us in our somewhat insignificance and making our lives more bearable and enjoyable.

An architect who dream's of making beautiful architecture in both its use or purpose and form - to practice architecture as a 'Practical Art'. As well as to create deep inquiries of architecture that extends out towards culture and the natural environment
FOLLOW
MESSAGE
LOGIN TO LIKE
[pro_ad_display_adzone id='2269' ajax_load='1' info_text='Advertisement' info_text_position='' font_color='#' font_size='11']