Currently, the Amazon forests face a reality of alarming deforestation. In Peru, more than 50% of the territory is made up of tropical rainforests. For years, the country has erroneously aspired to turn its tropical forests into a timber industry, a sector that only accounts for 1.1% of the national GDP, and which causes high rates of deforestation. Today, this is reflected in 8 million hectares lost, forgetting the true wealth of the tropical forest: its biodiversity.

Based on this problem, the objective is to reflect on how to understand the Peruvian Amazon, its richness and complexity, and to change the mindset regarding the current forest management for Peru. The industry of sustainable products with added value is a potential that can be found in the infinite range of this biodiversity. The more deforestation, the less understanding of the forest. Pucallpa is one of the cities with the highest deforestation rate in Peru. Seventy percent of its regional economy is based around the timber sector. This city is considered to be the largest wood processing center in the country. The heart of this wood processing center is located along the Manantay Gorge, privatizing this river bank and denying the direct relationship of the city with the river, being occupied by sawmills. In front of this wood processing center, there is mostly a deforested area, and its soil is flooded in the rainy season. It is here, facing this informal area, that tropical reforestation with native species is proposed with three types of fruit palm tree with the greatest economic potential for the industry of sustainable products with added value are predominant. The goal is to raise awareness and promote the preservation of tropical forests, using forest resources in a sustainable manner, generating a highly profitable production in the industry of sustainable products with added value.

By means of the tropical reforestation of 345 hectares, a productive park is created. Its annual production of palm fruits needs an infrastructure for its later transformation into pulp, the basic input for the industry of products with added value. For this purpose, a pulp processing plant is proposed. In addition to this, a center of forest bio-business incubators is also proposed to boost the business sector. Reinterpreting the Amazon houses formed by piles, platforms, and roofs, a large-scale contemporary infrastructure is created based on the logic of scaffolding which will hold a productive, public, and educational level. The project is located at the beginning of this large informal strip of swallmills, stopping the entry of wood through the river and connecting the city with the productive park using bridge infrastructure: The entrance from the city is formed by a public pedestrian walkway, understood as the extension of one of the main roads of the urban fabric, generating an experience that covers and leads directly and linearly to the productive park. The act of crossing this chaotic bank of sawmills forces us to confront both realities, sustainable and unsustainable. This reflection of industries shows us two opposing productive processes, two ways of working in the Amazon that reveals that it is possible to produce keeping the forest standing. 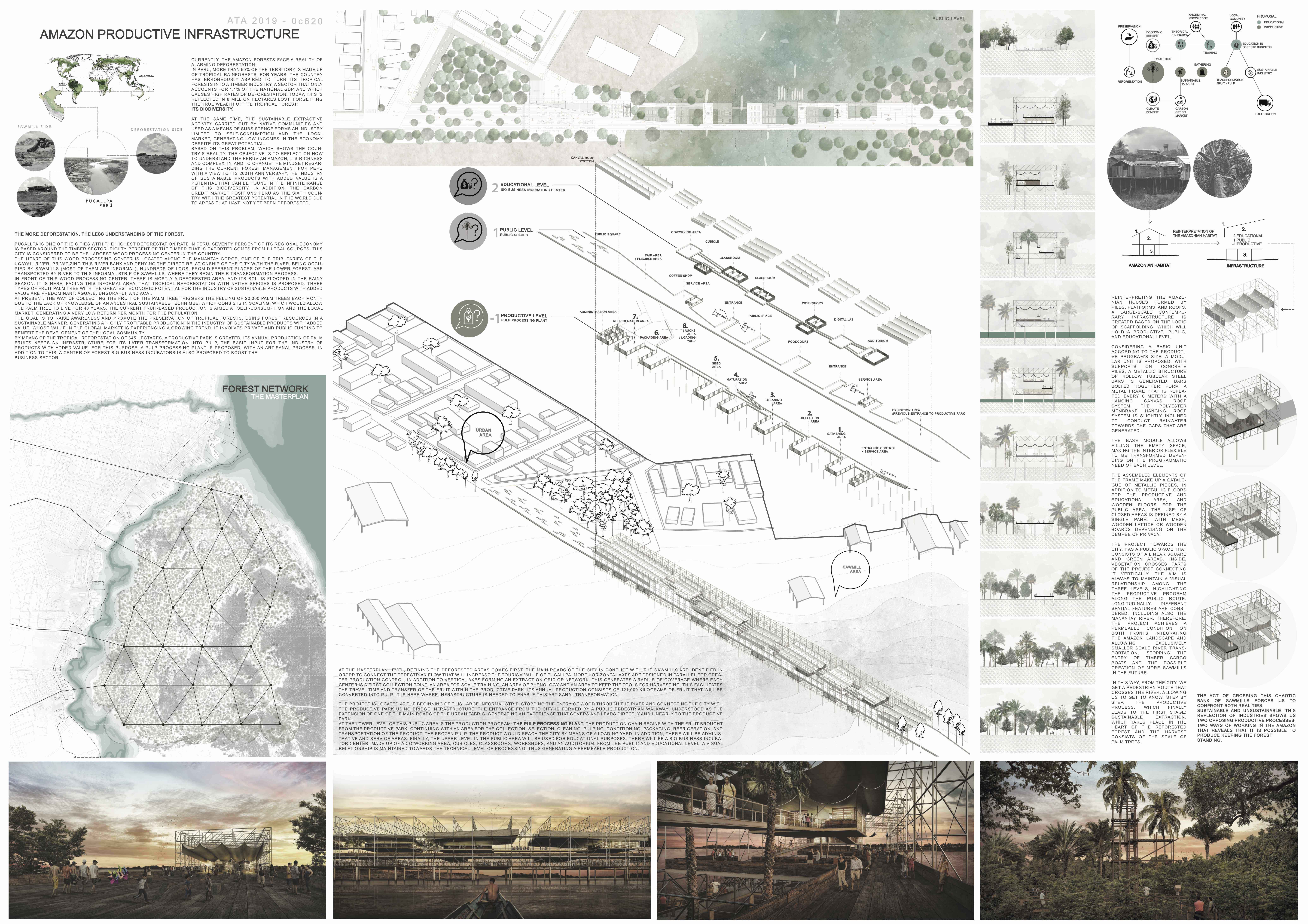