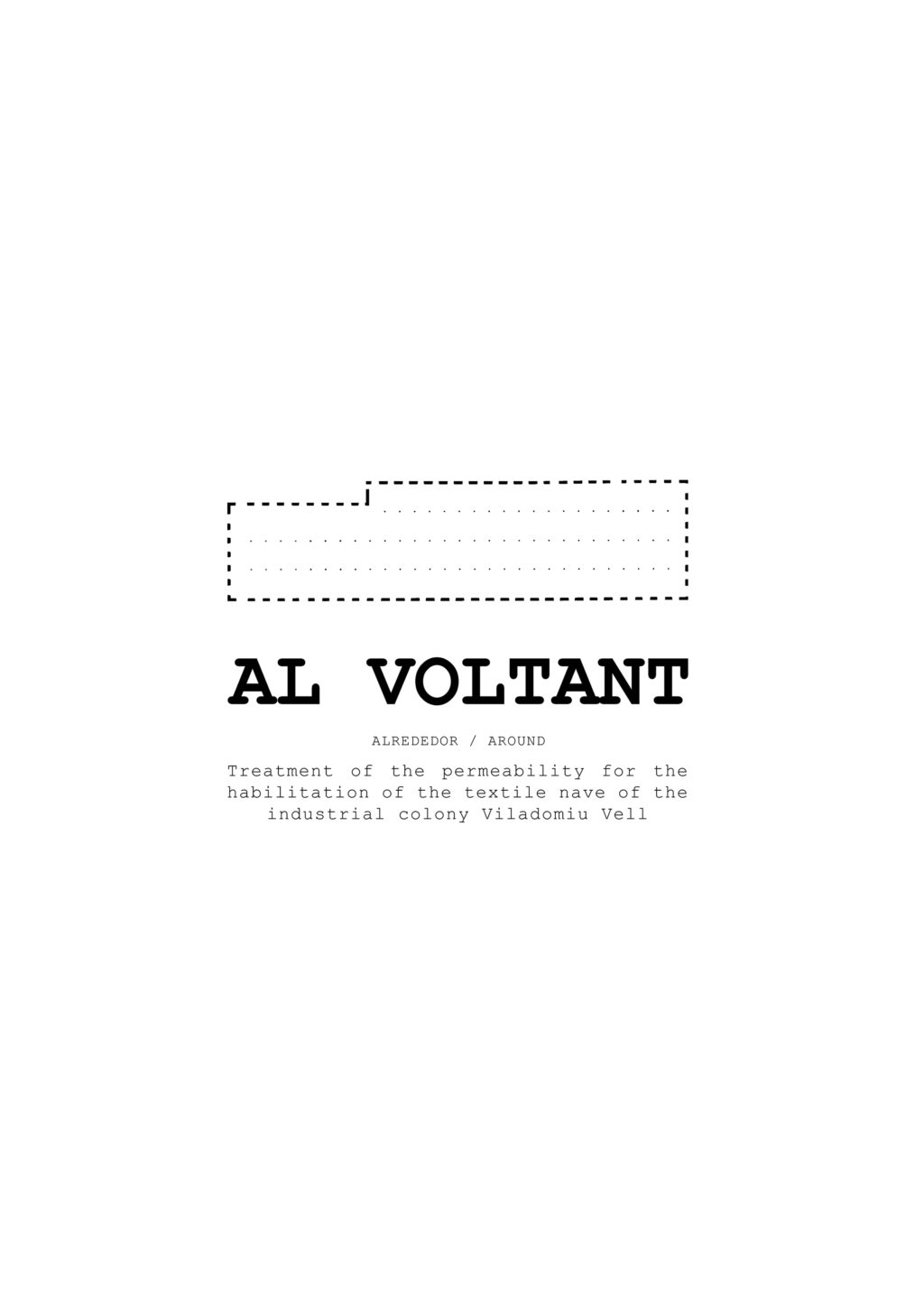 The colony Viladomiu Vel (Gironella, Catalonia) suffers a progressive loss of locals since all its industrial area, which covers more than a half of the surface, is in a total decline condition.
The architectural potential of the original industrial space is lost in the middle of a random order of little constructions. These annexes obstruct the whole complex and they mean a barrier to its use.
The proposal adopts a philosophy of selective deconstruction. The purpose is to enhance the central space saving these barriers. A new permeability is generated, which causes new flows of people, light and air. The main goal is to solve the problem of adaptation; both, to regulations and to the place itself. And thus enable new uses. 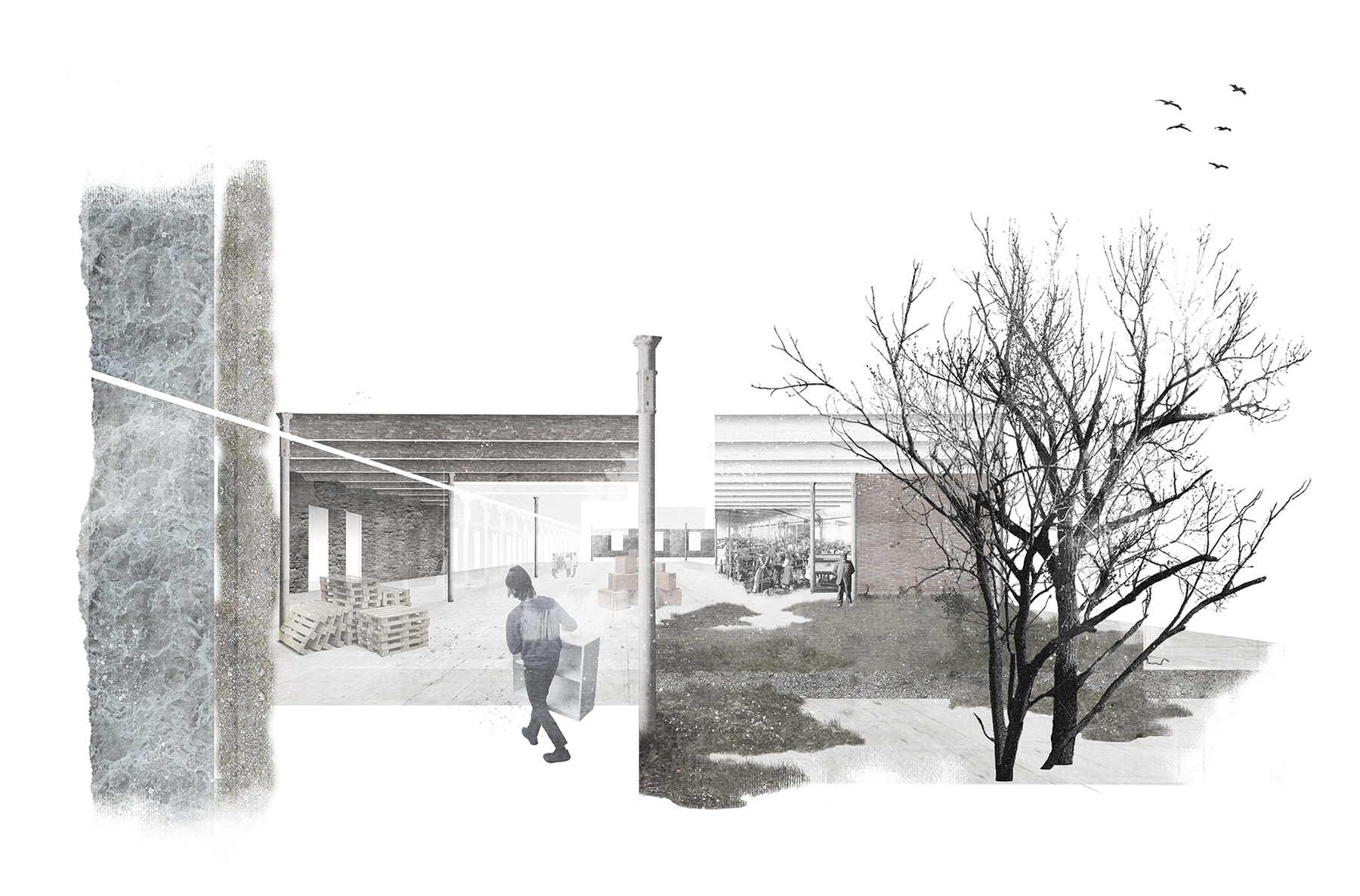 Eighteen textile factory settlements, including Viladomiu Vell, configure a productive landscape along the Llobregat river. They are involved in a context of economic, social and institutional vulnerability. As a result, many of these patrimonial buildings are in disuse. Therefore, the intervention in the industrial area of Viladomiu is understood as essential; not only to change its condition of desolation focus and improve the connection with the rest of the colony, but also to enhance a new possible use. Around the great textile nave, a series of constructions have been appearing over the years. Currently, these annexes represent barriers to the simple use of the industrial space. A program is not established, but based on the study of pre-existence, the proposal adopts a philosophy of selective deconstruction. It is pretended to revalue the old industrial space by removing the barriers, adding the essential and reusing the existing materials. Due to the vulnerable social situation, the project is limited to a reduced economic investment. Moreover, it is established a purpose of generating new opportunities that could be reproduced in other colonies. 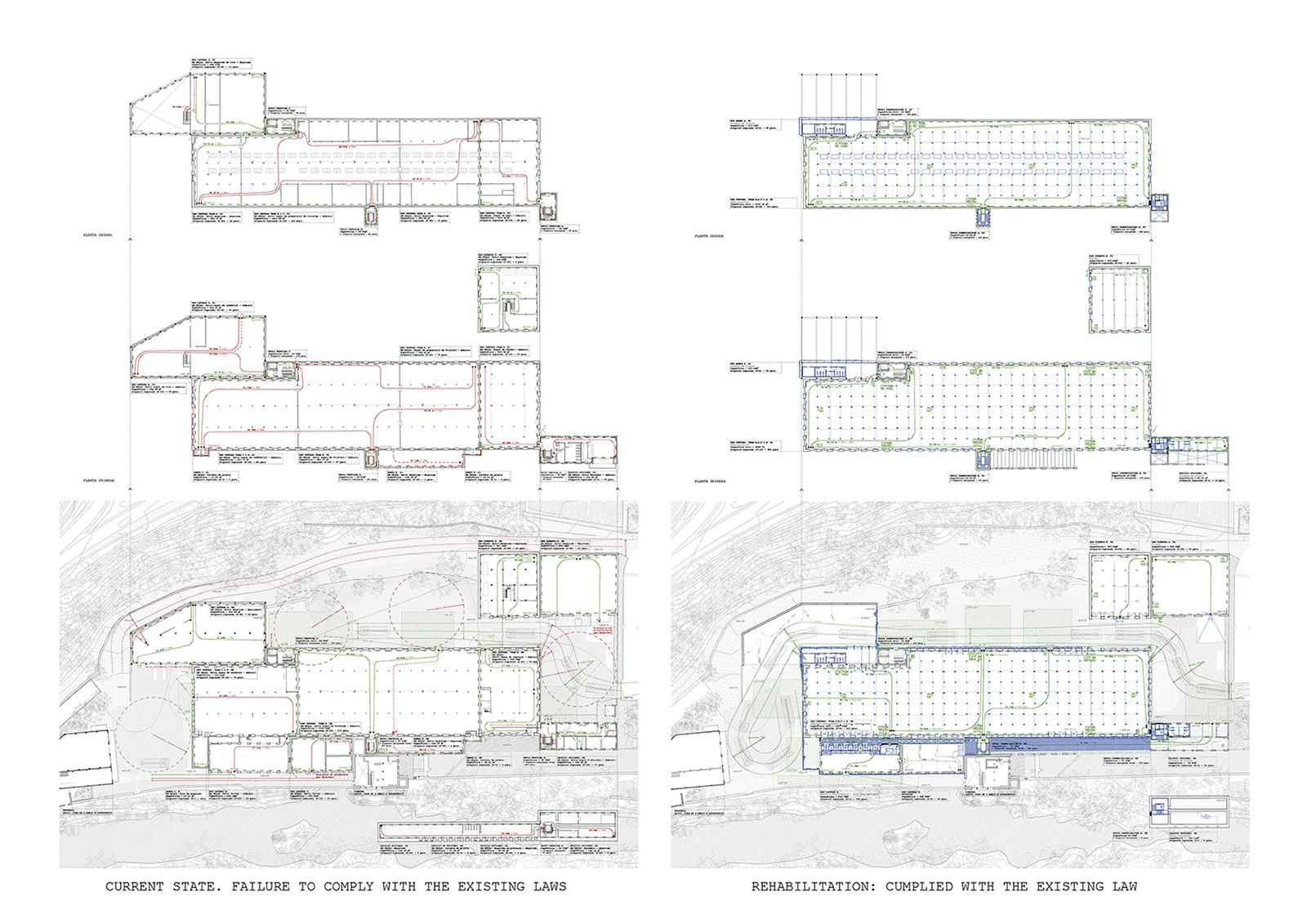 The selective demolition with manual methods ensures the stability of the preserved structures to be rethought. And are those annexed constructions who change their barrier condition to accommodate the new structures and technical points that adapt the central nave to the regulations and provide the necessary habitability for its use. Furthermore, regarding the perimeter of the central nave, the topography is being worked on to generate new transversalities and interior-exterior relations that today are nonexistent. At the same time, a new route, parallel to the LLobregat river brings one of the most characteristic elements of the colony such as the water channel. The attention to the envelope of pre-existence is understood as fundamental. The replacement of the roofs in poor condition, the opening of walls and the windows become essential duties. In addition, a vegetal solar protection system is incorporated in the facade to improve the building's passive climate behaviour. As a result of these detailed interventions, an adapted, equipped and habitable space is achieved. The industrial environment of the colony is transformed enabling new uses, improving its connection with the rest of the colony and saving it from permanent desolation. 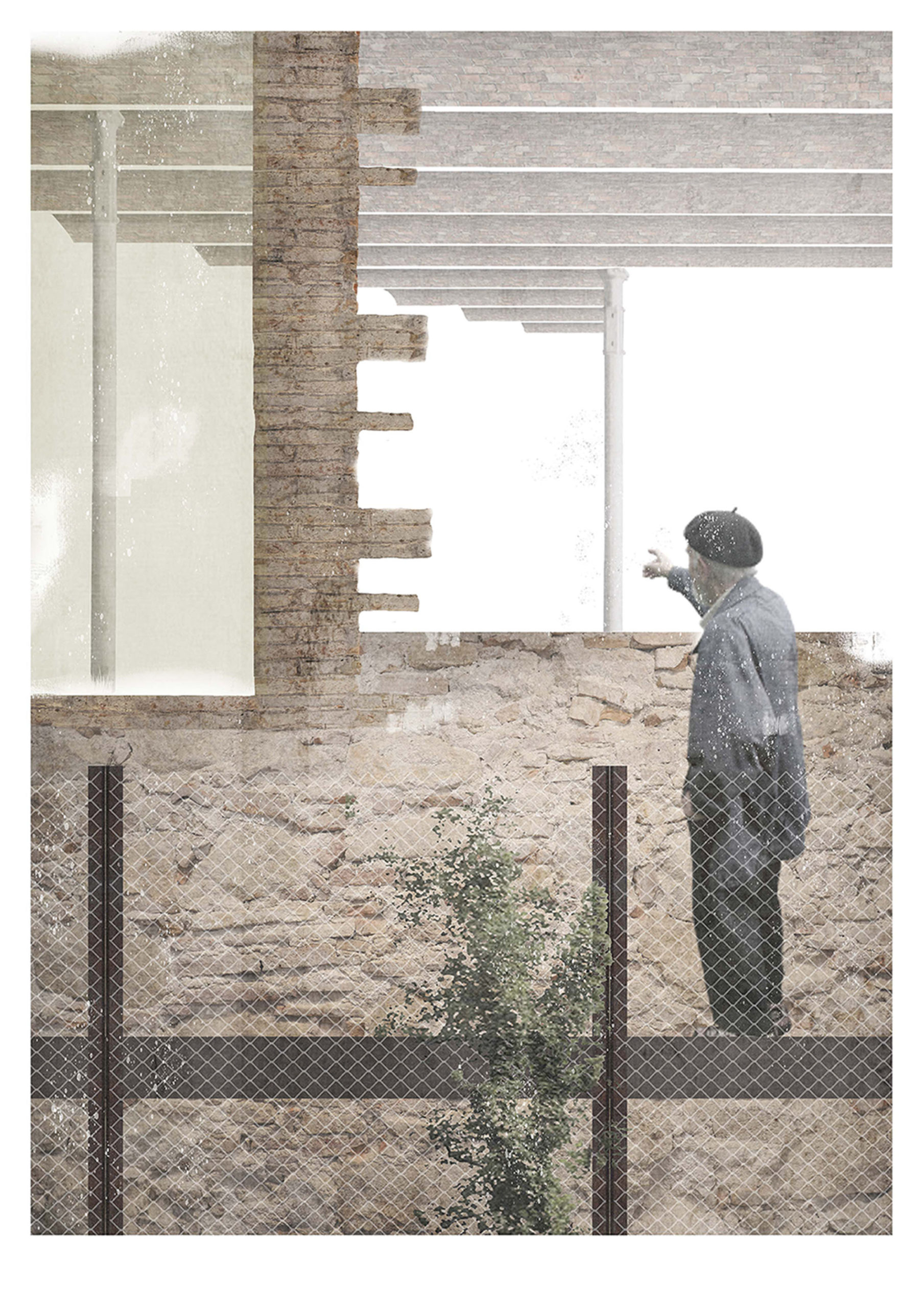 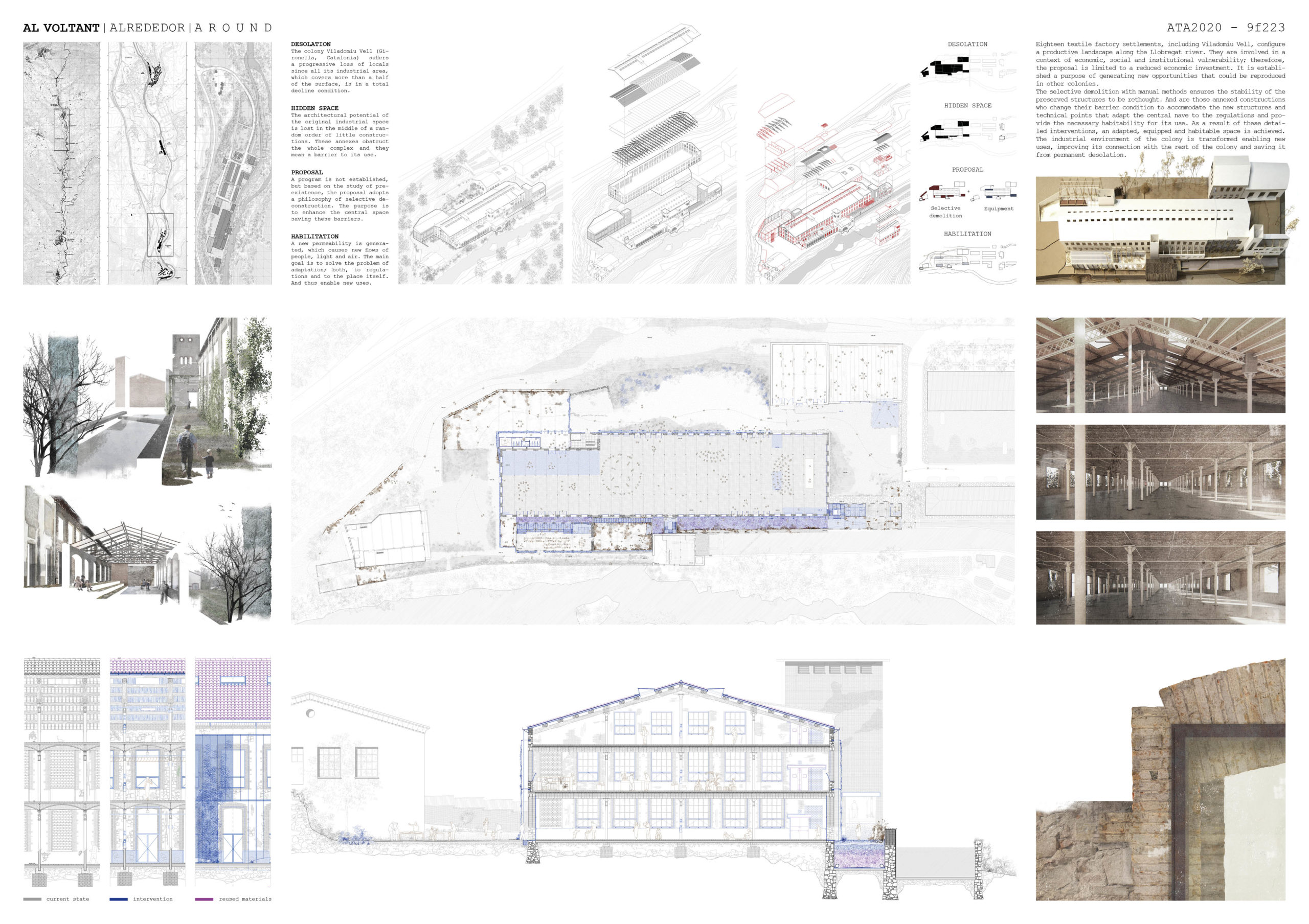 Two architects from different cities, who after sharing experiences around Europe, got together to do the Final Thesis in Barcelona. Especially interested in working the sustainability of the urban landscape and rethinking the role of the architect in urban processes.
LOGIN TO LIKE
[pro_ad_display_adzone id='2269' ajax_load='1' info_text='Advertisement' info_text_position='' font_color='#' font_size='11']