5 POINTS ALONG A PROMENADE: A narration of Patras’ myth

The proposal consists in the design of a promenade along the old port of Patras, Greece. The port played a vital role in the city’s commercial and cultural development, but remains inactive since 2011, thus forming a barrier that prevents the city centre from its seafront.

5 points / structures are attached to the promenade: the memorial, the square, the amphitheatre, the watchtower and the gate. They are strategically placed at the far end of inner city axes, each one representing a specific facet of the city: historical, social, cultural and commercial. The proposed promenade links these separate axes vertically, thus forming a strong pedestrian network that helps the city centre reconnect with its seafront.

The old port is reincorporated in the urban grid. The 5 points act as landmarks and urban ‘magnets’: individual destinations and social interaction spots. The seafront becomes a stage for social life, where people watch people and interact with one another. A narration of Patras’ myth is, thus, composed: a narration of not only history and memory, but common urban experience as well. 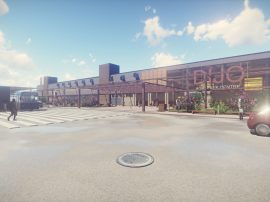