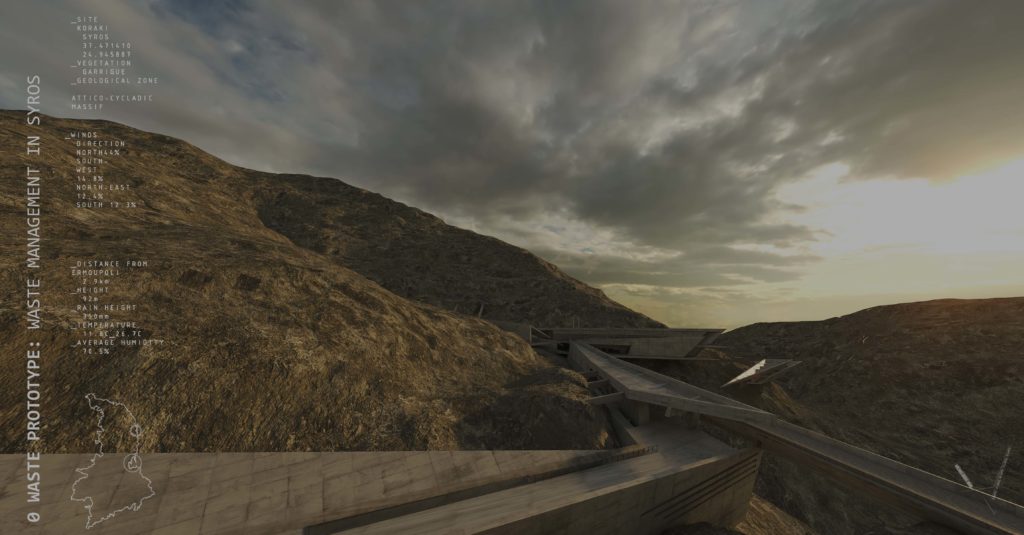 This design thesis proposes waste recovery in order to create a sustainable community. It suggests the full function of a prototype system of Circular Economy, beginning from waste recycling. Zero Waste Prototype emerges as an experimental model for the implementation of this system of reception, processing and reintroducing of garbage. The island of Syros,in Greece, serves as the ultimate paradigm for the realization of this prototype. 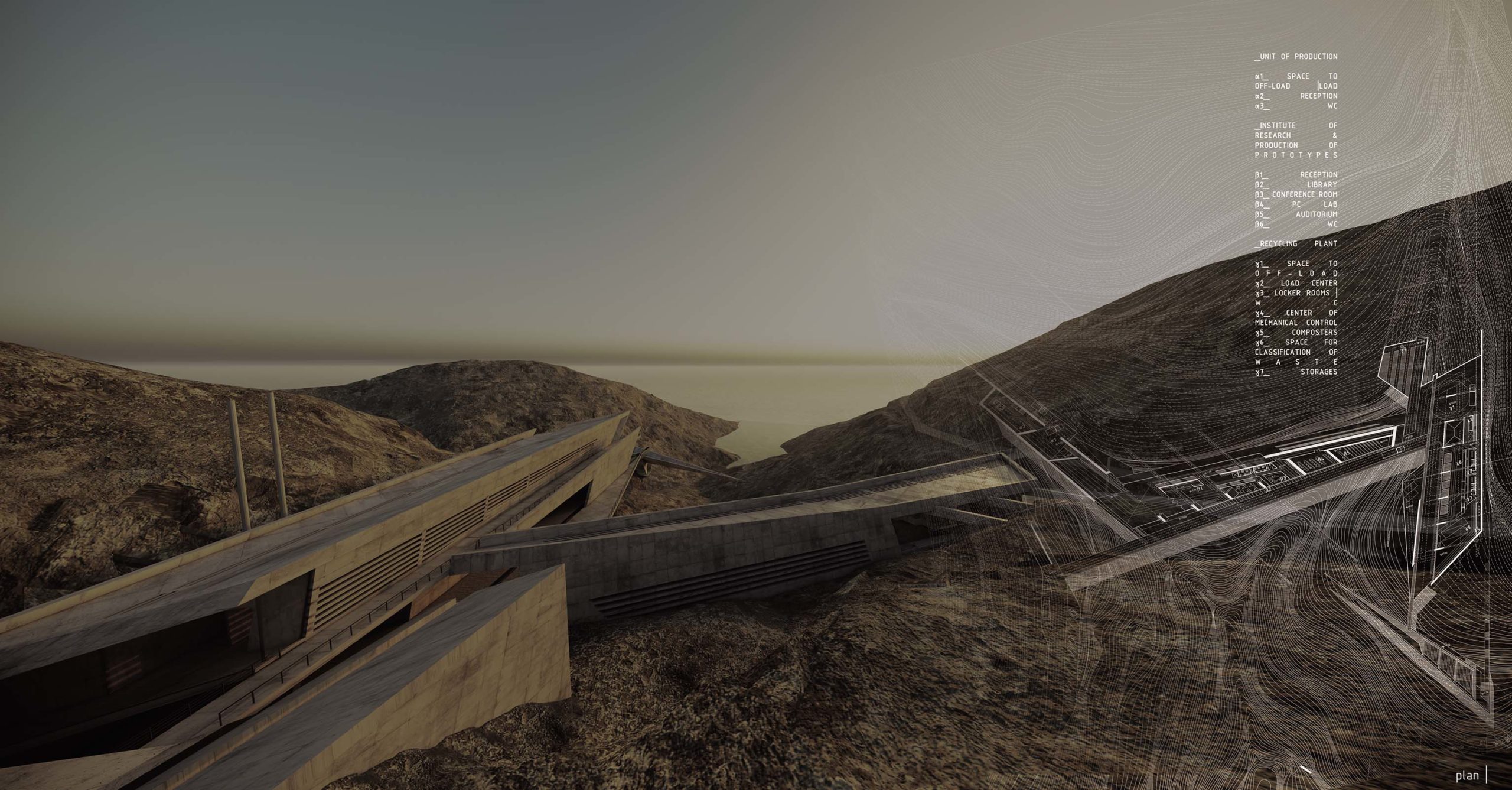 Notably, it is the highest populated island of Cyclades, while also functioning as a local administrative hub, house to a great number of public services. At the same time, Syros sustains some important production activity, mainly because of the shipyard and some local industries, while it is also home to some schools of higher education. On the other hand, Syros emerges as a typical case of a Greek island, welcoming a substantial influx of mass tourism during the summer months, shows a constant decrease of production activities and a shift of the local economy towards the services sector. In this context, the island’s waste management, despite some individual initiatives, follows mostly outdated methods, with the situation aggravating during the summer. On the occasion of the local landfill overflowing and the simultaneous need to deal with a multifaceted problem related to every economic sector, it comes across as an insuperable matter to readdress the garbage as a part of a sustainable economy. Towards a new Circular Economy , we suggest the exploitation of every economic dynamic of Syros, in the context of an organized system of circular economy that starts from waste recycling and introducing it to the production process. Among this system, the product follows superlative circles of Creation – Use – Recycling and is designed with care to the capacity of reuse and disassembly of its parts. 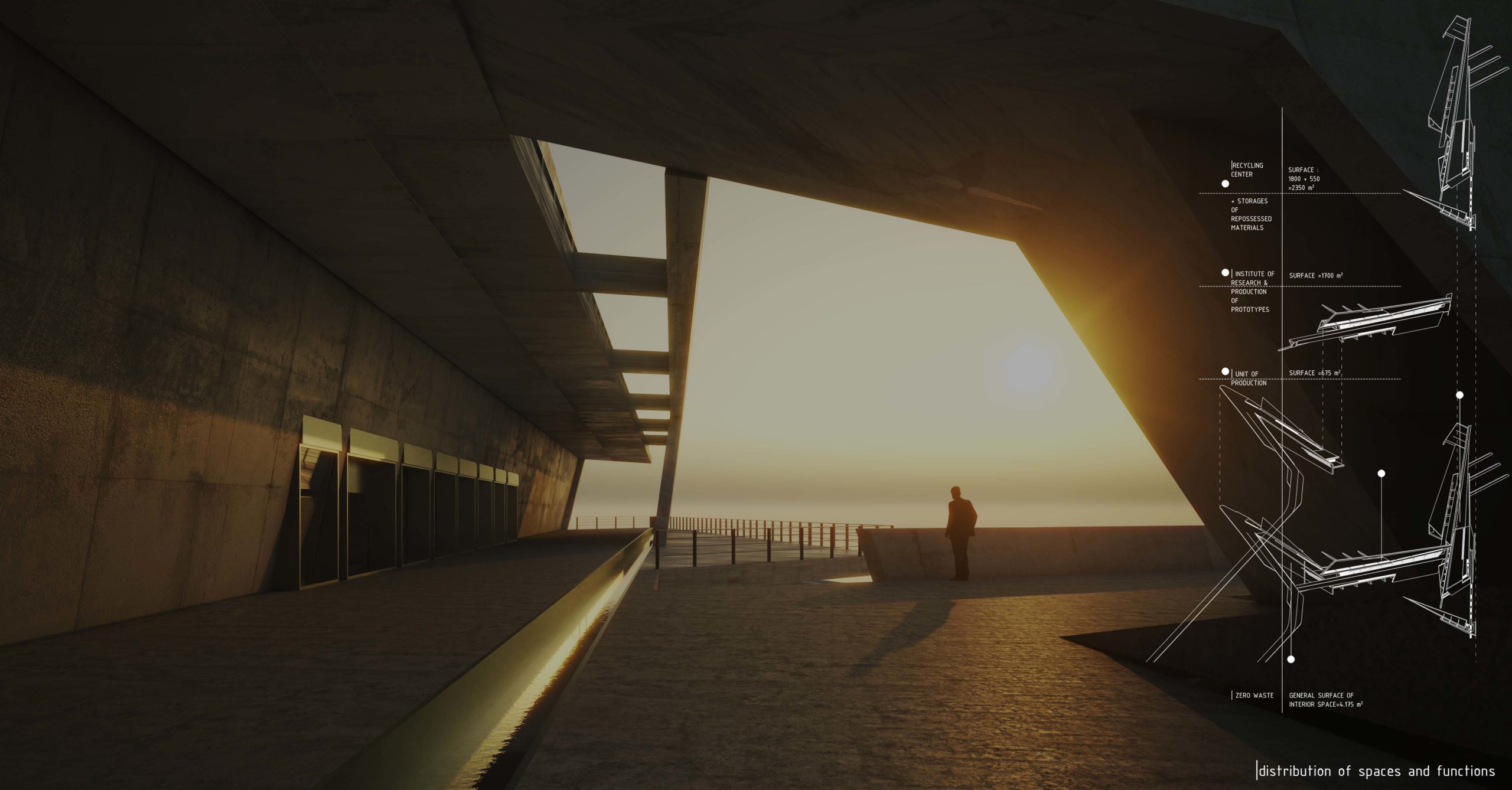 So, apart from the recycling factory, the function of a special Institute of research and prototype production comes across as indispensable.This Institute is going to function along with the Department of Products and Systems design Engineering of the University of the Aegean, situated on the island, in order to produce new raw material and products out of recycled material. The products are then headed for mass production through local industries and then for consuming. This circle ends with the product repair or disposal, leading to the recycling of their parts. Zero Waste Prototype is the actual infrastructure for this scenario of receiving, processing and reintroducing waste on the island, including the Recycling Factory, the Institute of research and prototype production and an Industrial Unit, functioning exclusively with recycled garbage. The establishment is to be placed at the overwhelmed landfill of Syros, in the northern part of the island, with the aim of arranging also the recovery of the spot. The intervention area is defined by three major rainwater streams leading to the sea, along with some significant installations for the waste management. The restoration begins by reintroducing the buried streams and controlling rainwater. For this purpose, the building itself is placed along the streams and at their meeting point, functioning as an organized system of water tanks able to receive falling water, while being an actual part of its circulation. 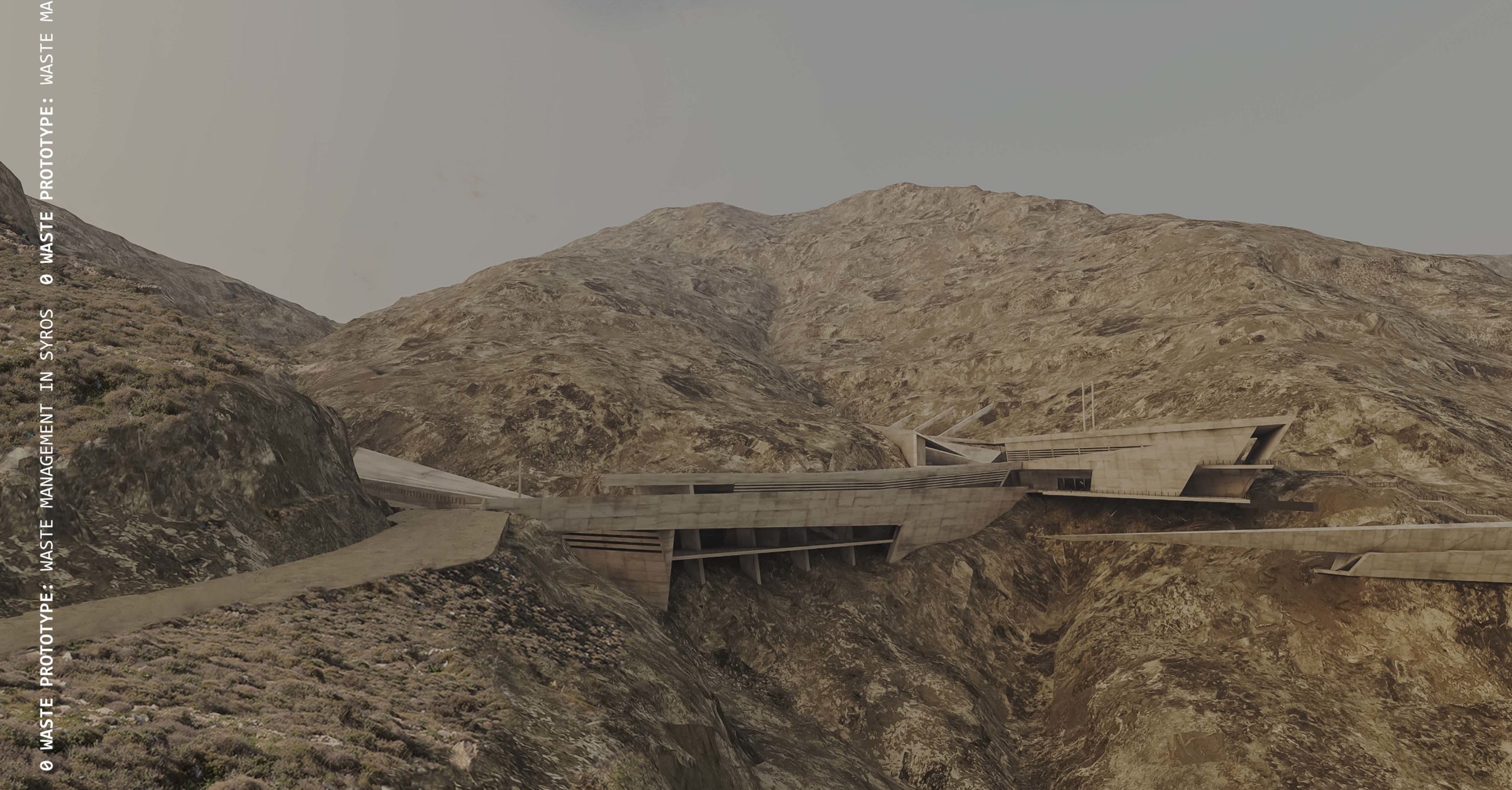 We are two young architects, inspired by the prospects of contemporary design and construction methods, in relation to providing solutions for modern day complex issues. Concerned by environmental problems and thinking in terms of sustainability, we try to produce concepts deriving from the unique aspects of the intervention site. Our design method is oriented towards the translation of existing terrain geometries to fold shapes depicting the ephemeral character of the landscape.
LOGIN TO LIKE
[pro_ad_display_adzone id='2269' ajax_load='1' info_text='Advertisement' info_text_position='' font_color='#' font_size='11']